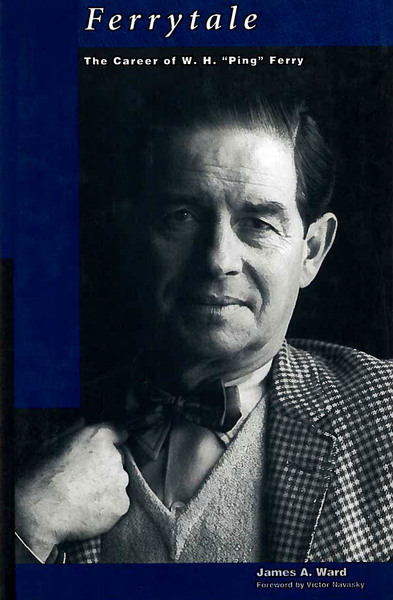 Wilbur H. “Ping” Ferry (1910-1995) was a self-styled “town crank,” an influential and iconoclastic figure who seemingly knew everyone worth knowing in the mid-twentieth century.

Businessman, thinker, activist, government advisor, and philanthropist, Ping’s career was as varied as his pronouncements. He taught John F. Kennedy at Choate, advised Eddie Rickenbacker at Eastern Airlines, worked a craps table in Havana, reported for several New Hampshire newspapers, and handled public relations for Sidney Hillman and his CIO/PAC. After World War II, he joined a public relations firm where he worked closely with Henry Ford II and John D. Rockefeller. He helped Ford establish his foundation, and with Robert Hutchins set up the Fund for the Republic, which later became the Center for the Study of Democratic Institutions in Santa Barbara, California.

From his post as Vice President of the Center, Ping harangued the nation about the evils of technology, environmental degradation, racial inequality, educational deficiencies, and the threat of nuclear war. He gained national fame when he attacked America’s last and most sacred cow, J. Edgar Hoover (“our official spy-swatter . . . in these persistent reports about espionage and sabotage, is he delicately telling us that he isn’t up to the job, that Red spies are running loose despite his best efforts?”). He also publicly resigned from the Democratic Party in protest against President Lyndon Johnson’s Vietnam policy, and promoted televised executions as the best way of combating capital punishment. Ping gave away millions of dollars to minorities and those who suffered from government’s intolerance. He fought for world-wide disarmament by supporting with friendship and money such luminaries as E. P. Thompson, the great English social historian and founder of European Nuclear Disarmament.

The book also reveals that Ping had a quieter, softer side. He treasured his friends, who were to be found across the globe, played the piano, formed a close relationship with the Trappist monk Thomas Merton, and assisted many struggling artists. He attracted followers who admired his independence and forthrightness, people who wished to be more like him. In Victor Navasky’s words, Ping’s ultimate importance was “the impossible example he set for the rest of us.”

James A. Ward is Guerry Professor of History at the University of Tennessee, Chattanooga