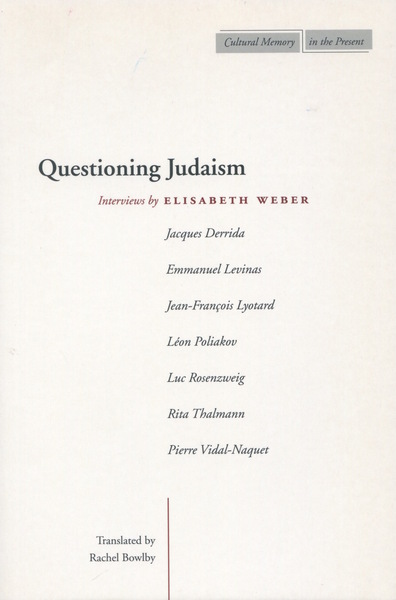 In the wake of the Dreyfus affair and the Shoah, many French intellectuals have maintained rich and complex relationships with Judaism, beyond as well as within the religious dimension. Whether they approach it via history, philosophy, biblical studies or sociology, or following a personal itinerary, many contemporary intellectuals are deeply involved in Jewish culture.

Interviewed at length by Elisabeth Weber, this volume presents the meditations of seven well-known French thinkers on the special relations of their own intellectual pursuit to Judaism. As memory or as the place of “circumfession” (in Jacques Derrida's words), as the symbol of the “unrepresentable” (Jean-François Lyotard) or as the witness, according to Emmanuel Levinas, to a “biblical humanity,” Judaism is continually engaged in renewing and displacing contemporary thought.

Elisabeth Weber is Professor of German and Comparative Literature at the University of California, Santa Barbara. She is the editor of Jacques Derrida, Points . . . : Interviews 1974-1994 (Stanford, 1995).

"These interviews will challenge readers to examine their Jewish identity while taking a fresh look at history."

"...this is a remarkable interview, conducted by one of Derrida's most conscientious and demanding readers."