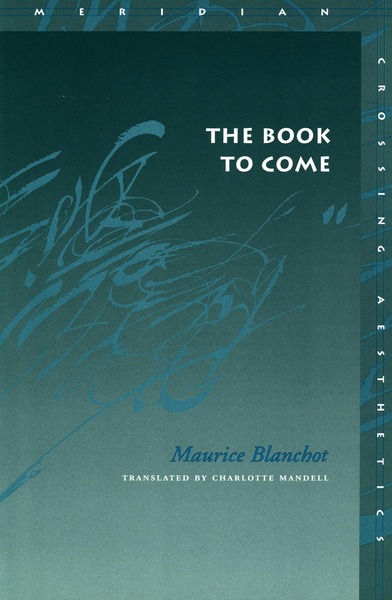 Finalist in the 2002 Non-Fiction Translation Prize, sponsored by the French-American Foundation.

During the last half of the twentieth century in France, Maurice Blanchot was a key figure in exploring the relation between literature and philosophy. He developed early on a distinctive, limpid form of essay writing, and his essays, in form and substance, left their unmistakable imprint on the work of the most distinguished French theorists. The writings of Barthes, Foucault, and Derrida, for example, are hardly imaginable without Blanchot.

The Book to Come gathers together essays originally published in La Nouvelle Revue Française; almost all of them appear in English for the first time. Not a random collection of essays, this book is organized into four sections: "the secret of literature"; literature as exigence and as meaning; literature and the novel; and the future of writing and of the book. The authors discussed constitute a veritable repertoire: Rousseau, Proust, Artaud, Brach, Musil, James, Beckett, Bataille, Mallarmé, Joubert, and Claudel, among others.

"Maurice Blanchot was without doubt one of the greatest Western critics of the 20th century, and his work was essential for the development of a wide range of contemporary and subsequent critics of widely different allegiances. I read most of these essays as they came out in La Nouvelle Revue Française and reading them again I am struck once more by their brilliance simply as literary criticism, by their indefatigable focus on the question of the nature of writing, and by the wide range of modern authors they discuss from Blanchot's special perspective."