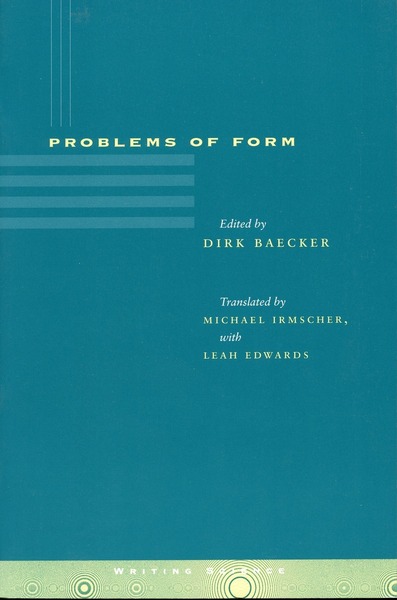 Sociology has long sought to find out how acting in a situation and observing that situation may differ and nevertheless belong to a single kind of social operation. George Spencer-Brown's Laws of Form (1969) provides one way to conceive of such an operation. The present book is the first to make sociological use of his mathematical calculus of form, which has been extensively applied to cybernetics, systems theory, cognitive science, and mathematics.

Spencer-Brown's theory states that any action or communication is always an operation that makes a distinction. Not only does this operation take place, but it can be observed as indicating what it is interested in, and as leaving unmarked what it is not. Distinctions thereby entail a logic of inclusion and exclusion that is subject to social debate and conflict. In social situations there is no action that does not at the same time execute, maintain, or cross a distinction.

Thus the observer is part of the situation he or she observes. The essays in this volume use this idea to describe different social "forms" as consisting of action observed by further action. A "form" here is understood to be the two sides of a distinction and its dividing line, taken together. All social action, therefore, consists of three values: marked side, unmarked side, and an operation separating the two. If one watches the third value, one ends up observing the observer drawing the distinction—an observer who, of course, may be oneself.

In this collection, more general essays study the consequences of such an understanding of form for our conceptions of literature, paradox, sign, play, and language. Other essays focus on the observations necessary to construct such forms as money, the university, the state, a career, or sickness. All the essays share an interest in problems ensuing from the fact that though one can observe the form of a distinction and become aware of its arbitrary, contingent, and discriminatory nature, one nevertheless, when trying to act or communicate, must choose a distinction. The essays show how social situations deftly veil the arbitrariness of the distinctions that constitute their forms.

Dirk Baecker is Professor of Sociology and Management at Witten/Herdecke University. He is the author, most recently, of Poker im Osten.