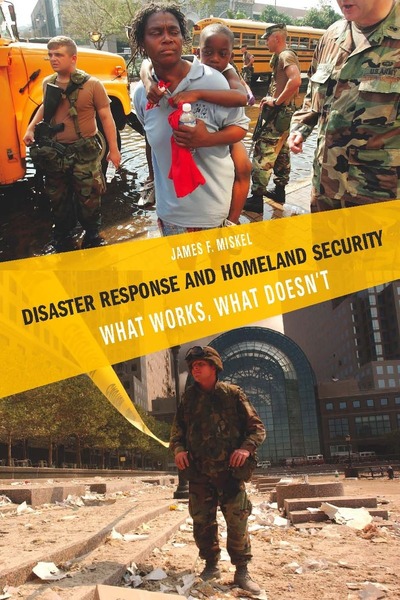 Hurricane Katrina is the latest in a series of major disasters that were not well managed, but it is not likely to be the last. Category 4 and category 5 hurricanes will, according to most predictions, become both more frequent and more intense in the future due to global warming and/or natural weather cycles. In addition, it is often said that another terrorist attack on the United States is inevitable; that it is a question of when, not whether. Add to that the scare over a possible avian flu pandemic. As a result, the United States should expect that disaster response—to natural and other types of disasters—will continue to be of vital concern to the American public and the policymakers and officials who deal with disaster response and relief, including the military. The U.S. disaster relief program reflects a basic division of responsibility between federal, state, and local governments that has generally stood the test of time. At the federal level, a single agency, FEMA—now under the Department of Homeland Security—has been charged with the responsibility for coordinating the activities of the various federal agencies that have a role in disaster relief. A successful disaster response requires three things: timely and effective coordination between state and federal governments; effective coordination among the federal agencies; and effective coordination between and among state and local government agencies. Miskel examines the effects that operational failures after Hurricanes Agnes, Hugo, Andrew, and Katrina have had on the organizational design and operating principles of the disaster response system program. He also discusses the impact of 9/11 and the evolving role of the military, and he identifies reforms that should be implemented to improve the nation's ability to respond in the future.

James F. Miskel is a consultant for the defense consulting firm Alidade Inc. Until 2005 he served for 12 years as Professor of National Security Affairs at the Naval War College, where he still teaches online courses in the graduate degree program. During the Reagan and (first) Bush Administrations he served on the National Security Council.

"Miskel provides the reader with a complete and nuanced understanding of (a) the vast logistic and coordinative effort that goes into helping American citizens in an assortment of emergencies, and (b) the nature and characteristics of certain types of disasters that may speak to disaster response breakdowns."

"Miskel has produced an essential, topical, informative, concise, highly readable work that masterfully conveys in eight tightly reasoned chapters policy, political, historical, and sociological facts about disaster response in this era of homeland security. His treatise reflects his considerable academic expertise, his objectivity, and his insider experience. He has managed to lucidly explain the co-evolution of disaster management and terrorism policy in a way that a broad cross section of readers will appreciate."

"Jim Miskel has provided an excellent historical summary of natural disasters and the associated FEMA response. His provocative insights into the basic design of the response system should facilitate decision makers' understanding of the politics of disaster preparedness, its ultimate placement and inherent responsibilities, and the critical importance of the appointment of competent personnel."

"Miskel, a former Deputy Assistant Associate Director of FEMA, examines the effects that operational failures after Hurricaines Agnes, Hugo, Andrews, and Katrina have had on the organizational design and operating principles of the disaster response system program. He also discusses the impact of 9/11 and the evolving role of the military, and he identifies reforms that should be implemented to improve the nation's ability to respond in the future."