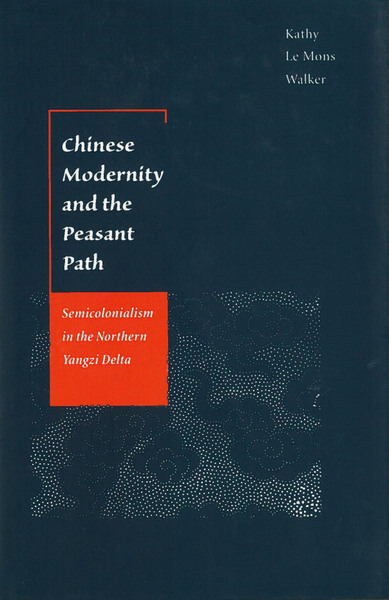 This ambitious work traces a social history of semicolonialism in late-nineteenth- and early-twentieth-century China. It takes as its central concern the intertwining of two antagonistic forces: elite constructions of modernity shaped globally, and an alternate line of peasant resistance and development. Nantong county and the northern portion of the commercially advanced Yangzi Delta form its focal points. Lying in the hinterland of and connected in myriad ways with the treaty port of Shanghai, which in the late nineteenth century became the center of imperialist activity in China, the northern delta is an ideal locale for examining how the acquisition, transmission, and contestation of power may have changed during the extended moment of semicolonial encounter.

The author’s specific project is to unravel the multiple strands of the semicolonial process and thereby the dominant and alternative histories it embodied. In emphasizing semicolonialism as a structural context shaping events, the book opens up a pivotal but silent area in the history of modern China. In confronting the development of capitalism as a historical phenomenon and suggesting that its consequences for land and labor on a global scale need greater theoretical and historical scrutiny, the book forces a new understanding of China’s modernity.

The book is in two parts. The first delineates key long-term dynamics in the political, economic, and social history of the area from the late Ming dynasty to the Opium Wars. The second part begins with an examination of the rise of modernist urban power in the context of accelerating growth in the textile and cotton trades, focusing on such topics as economic restructuring under Shanghai’s impetus, new forms of economic and political organization, and contention as well as cooperation within the urban elite. Turning to the countryside, the book then examines the regearing of the rural economy to the needs of urban capital, local and global; outlines the emergence of modern landlordism and other rural “capitalisms”; analyzes class formation in the peasantry associated with changes in labor organization, tenurial arrangements, and the gendered division of labor; and traces the coalescence of a distinctive political discourse through which peasants contested certain development schemes and advanced alternative conceptions of community and nation.

Kathy Le Mons Walker is Associate Professor of History at Temple University. She is a coauthor (with Philip C. C. Huang and Lynda Shaeffer Bell) of Chinese Communists and Rural Society, 1929-1934.

"Walker successfully integrates Japanese, pre and post-Cultural Revolution Chinese, and Western historiography as well as an impressive body of theoretical work, and her book will become required reading for specialists in the field."