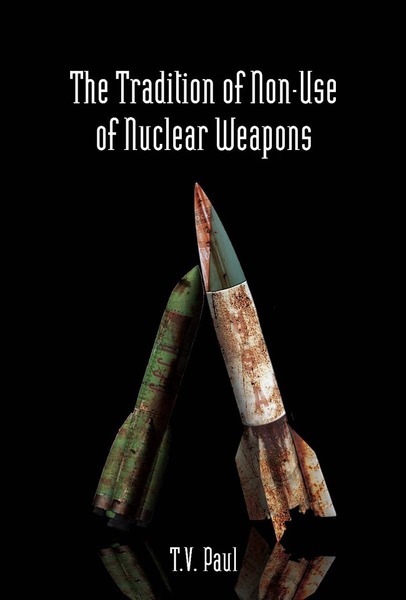 The Tradition of Non-Use of Nuclear Weapons
T.V. Paul

Since the Hiroshima and Nagasaki attacks, no state has unleashed nuclear weapons. What explains this? According to the author, the answer lies in a prohibition inherent in the tradition of non-use, a time-honored obligation that has been adhered to by all nuclear states—thanks to a consensus view that use would have a catastrophic impact on humankind, the environment, and the reputation of the user.

T.V. Paul is James McGill Professor of International Relations, McGill University and Director, University of Montreal-McGill Research Group in International Security. He has published eight books including Balance of Power: Theory and Practice in the 21st Century (with James Wirtz and Michel Fortman, Stanford, 2004).

"This book is an excellent resource for students, scholars, and the policy community. It is well written and accessible, and appropriate for course use for advanced undergraduates and graduate students. Scholars studying deterrence, the military role of nuclear weapons, and proliferation would all find the author's analysis of use. Finally, policymakers concerned with defense policy and nuclear proliferation would be well advised to take heed of the interaction between the tradition of non-use, nuclear deterrence, and proliferation incentives."

"Paul's framework is a timely and important contribution to the nuclear debate that incorporates valuable perspectives from both the rationalist and ideational perspectives. As the issues of arms control, force structure, and disarmament inevitably become mired in political trench warfare, creative and eclectic thinking on nuclear issues will be at a premium. The Tradition of Non-use of Nuclear Weapons stands to provide an example of the rigorous scrutiny to which classic paradigms must be subjected in the search for real-world policy solutions."

"Paul builds on the impressive progress by scholars of deterrence, especially on the crucial concept of reputation. Unlike much of deterrent scholarship, which stresses reputation for credibility, Paul is more concerned with reputation in the form of esteem. Non-use, he argues, is a social norm based on calculation of interest. Like Joseph Nye's work on soft power, Paul sees states restrained by their need for acceptance or support. Time and again, his scholarship reveals decision-makers pre-occupied not by the anguish of violating a moral taboo, but by fear of antagonizing various audiences, above all other states."

"T.V. Paul has provided a solid, useful explanation of the major sources of that tradition and of the threats to its continuation. Both academics and policy makers would do well to pay attention to his work."

"Paul has produced an excellent book. The central argument that a tradition of non-use has restrained the use of nuclear weapons is well-developed and largely convincing. Although the extent of this influence is, of course, debatable, Paul succeeds in exploring the historical influence and broader implications of the tradition. This book therefore makes an important contribution to the growing body of literature considering the non-use of nuclear weapons."

"Paul has written an interesting and useful book. He highlights the continuing, and perhaps increasing, dangers of nuclear use and the importance of maintaining the tradition of non-use."

"This is one of the best books on nuclear policy since George and Smoke's classic, Deterrence in American Foreign Policy. It is a major and original contribution to our theoretical understanding and our empirical knowledge of nuclear weapons."

—John A. Vasquez, Thomas B. Mackie Scholar in International Relations, University of Illinois at Urbana-Champaign

"An impressive and nuanced assessment, at once wide-ranging and focused."

"The most astonishing event of the twentieth century did not occur: no nuclear weapons used in warfare since the two on Japan in August, 1945. Here is the first thorough history of the evolution of that powerful, completely unpredicted, tradition, with analysis of how to maintain and strengthen it."

"T.V. Paul, a distinguished academic . . . has made a valuable contribution to exploring the historical experience of the non-use of nuclear weapons and the challenges now faced globally."

"In this timely book, T.V. Paul offers a useful contribution to the debate over why nuclear weapons have remained unused since 1945...Paul's work is an accessible, sensible, and useful contribution o what has become an ongoing dialogue on the factors behind nuclear non-use. Future students of the topic would be well-advised to take Paul's work seriously."

"Paul's 'riveting' and 'masterly' book traverses the world of theory and policy with equal ease and is illustrative of how innovative theorizing can shed new light on real world issues in greater depth, offer a richer analysis of even much debated issues. This books deserves to be taken seriously by both policy makers and academics as it is one of the most original and significant contributions to our understanding of nuclear weapons to have come out in recent times."

"A good book is clearly written, methodically laid out, carefully researched, appropriately nuanced, and has interesting and important things to say. On these dimensions, T.V. Paul has written a very good book indeed . . . The Tradition of Non-Use of Nuclear Weapons clearly has a great deal to offer to a variety of audiences. It speaks to an obviously important issue; it nicely balances theory and history; and it corrects a number of important misconceptions. Moreover, it accomplishes all this remarkably efficiently—in just over 200 pages of text."

"T. V. Paul's book joins the same political science debate, focusing instead on the 'tradition' of non-use of nuclear weapons, which sometimes is described by other analysts as a taboo or a norm. Paul presents a valuable survey of the history of why such weapons have not been used since Nagasaki, arguing that the constructivist political scientists may be exaggerating the role simply of ideas, with the practical considerations of national interest playing a major part in keeping these weapons from being used. One could indeed find a logical parallel in terms of national interests between the continuing mutual-deterrence pattern of 'no first use,' in which one side's weapons are held in check as long as the other side does similarly, and a pattern of no first proliferation, where inherent capabilities to produce nuclear weapons are not employed, as long as the other side does not acquire such weapons . . . The author presents an interesting analysis of conflicts where one side had nuclear weapons and the other did not, for example, in the Falklands War between Britain and Argentina. Political scientists may welcome Paul's book as example of how one can apply alternative theories to concrete policy issues, but someone else will find this book all the more valuable, for the meticulous and nuanced coverage of the nuclear issue, presented in clearly written form."

"Paul has written an interesting and useful book. He highlights the continuing and perhaps increasing dangers of nuclear use and the importance of maintaining the tradition of non-use. This is a debate that has been neglected and Paul puts it firmly back on the agenda both for students of strategic studies and practitioners involved in maintaining internationals security in a dangerous world."

"Paul uses his sources intelligently. He cites an impressive array of references to prove his case. In cases where policymakers actually considered the option of using nuclear weapons, Paul traces the points of contention and explains why they decided not to use nuclear weapons after all. He also charts the arguments that were put forward when the decision was taken, thus strengthening his main contention."

"The strength of this book is two-fold: it develops a two-step political-historical argument to account for non-use, and examines non-use in a wide range of cases, many of them non-Western . . . It is accessible to policymakers due to its length and style and can only have the effect of reinforcing the tradition on non-use to the extent that those in power come away impressed by its logic and lessons and behave more responsibly in a crisis." 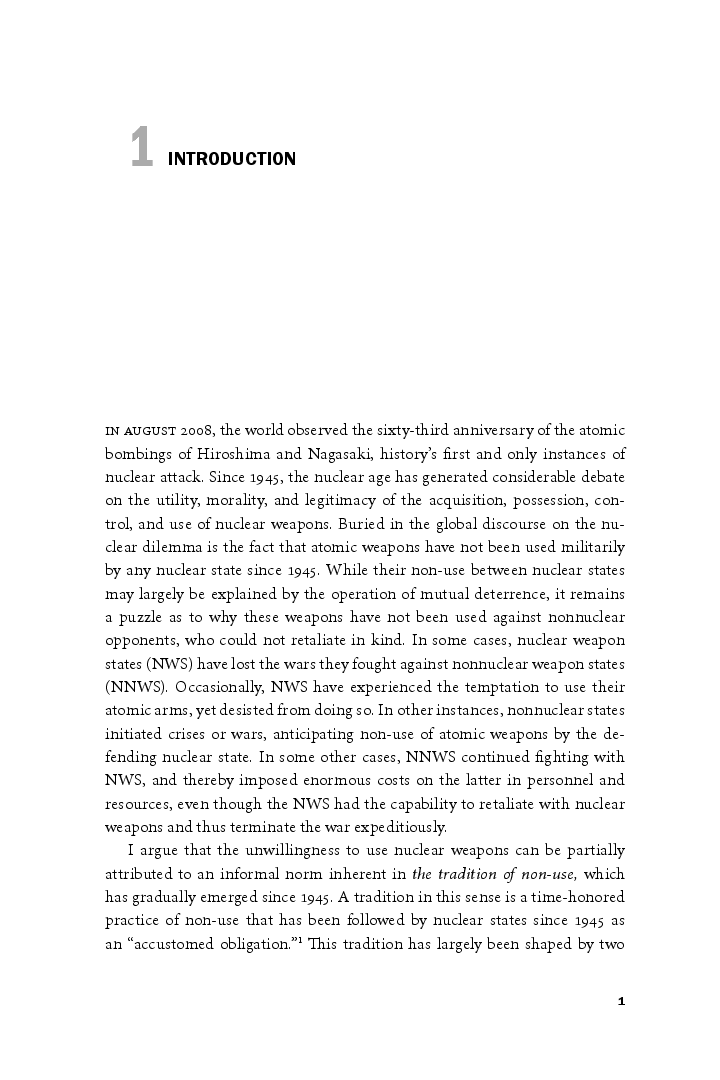 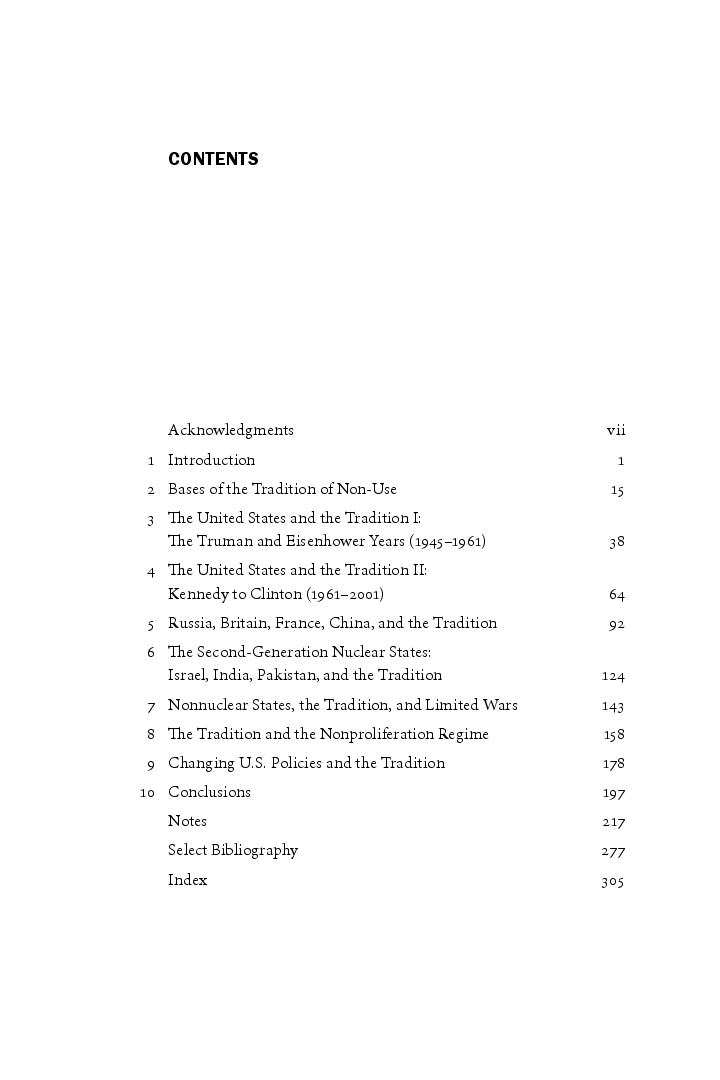