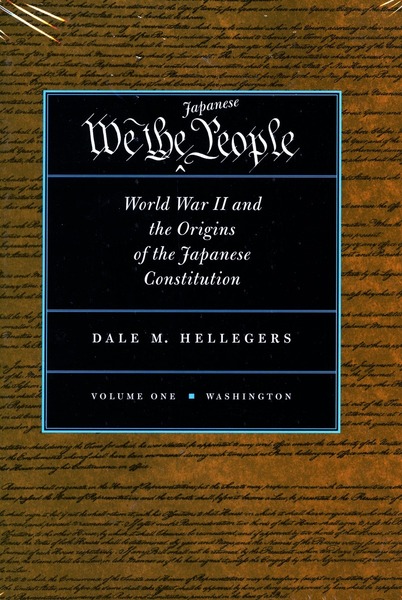 This is the definitive story of how the United States attempted to turn Japan into a democratic and peace-loving nation by drafting a new constitution for its former enemy—and then pretending that the Japanese had written it. Based on scores of interviews with participants in the process, as well as exhaustive research in Japanese and American records, the book explores in vivid detail the thinking and intentions behind the drafting of the constitution.

Confusion and strife marked planning for the democratization of Japan, first in Washington, then in occupied Tokyo. Policy makers in the State, War, and Navy departments, the Joint Chiefs, and the White House contended bitterly over how to devise an “unconditional surrender” that would minimize Allied casualties while according the victor supreme authority over a soundly defeated Japan. By war’s end, there were still no firm guidelines on a host of crucial issues, including how the Japanese system of government could be made acceptably democratic.

The first months of occupation were chaotic, with General MacArthur organizing his staff around loyal followers and edging out experts sent from Washington. Hampered by a narrow interpretation of the terms of surrender and wishful thinking about Japanese compliance with American expectations, MacArthur set in motion a fiasco. Because of a translator’s error, Prince Konoye, three-time Prime Minister of Japan, thought MacArthur had entrusted him with revising the Japanese constitution and assembled a staff of constitutional law experts and set to work. However, conservatives in the Japanese cabinet denounced his efforts and produced their own version, which MacArthur found unacceptable.

MacArthur then secretly instructed his staff, with its very limited knowledge of either Japan or constitutional law, to draft a new Japanese constitution, which amazingly they did in a week’s time. Expecting approval of its own draft, the Japanese cabinet was stunned when presented with a completely different American document. So unrelenting was the pressure exerted by MacArthur’s officers that it was clear to members of the cabinet they had no choice but to adopt the American draft more or less intact, and publish it as their own.

Because of the broad range of its meticulous research, the book will be a standard reference not only for students of Japanese history but also for legal scholars, diplomatic historians, and political scientists.

Dale M. Hellegers, an independent scholar and a classical homeopath, has lectured on the subject of this book at the Harvard and Columbia Law School.

"Independent scholar Hellegers has produced a magnificent two-volume study of the origins of the 1947 Japanese constitution."

"The book adds much new material and insight to the existing literature on the subject."

"Highly recommended for all academic levels and collections."

"The publication of Hellegers's long-awaited study of the origins of the Japanese Constitution is a joyous event . . . .These volumes will not dissapoint [Hellegers's] many admirers. This is a tremendous piece of work . . . .a treasure trove for anyone interest in the American effort, during and in the wake of World War II, to transform Japan from fanatical enemy into a stable constitutional democracy . . . .Hellegers's two volumes, many decades in the making, are a tremendous achievement. They are beautifully written and painstakingly documented."

"Although the overall story [Hellegers] tells will be familiar to specialists, she presents it with unprecedented authority, comprehensiveness, and independence of mind."

"For anyone who values good research, a good read, and cross-cultural politics, Hellegers's We, the Japanese People is a must buy."

"Scholars, students, and foreign policymakers would be well advised to read We the Japanese People, as its subject matter—the transplantation of American ideals of democracy to Japan after World War II—is too easily co-opted in contemporary soundbites."

"...We, the Japanese People provides a wealth of wisdom and vital information not just for historians, but how'-to's and how-not-to's for all those who would hope to see fledgling democracies rise up from authoritarian ashes."