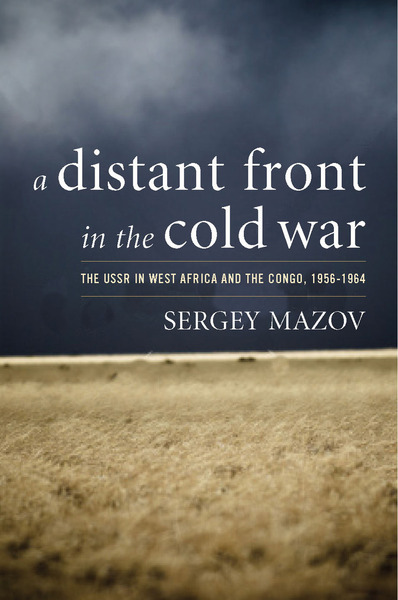 A Distant Front in the Cold War
The USSR in West Africa and the Congo, 1956-1964
Sergey Mazov
SERIES: Cold War International History Project

A Distant Front in the Cold War reveals West Africa as a significant site of Cold War conflict in the late 1950s and early 1960s. Although the region avoided the extreme tensions of the standoff in Eastern Europe or in the Cuban missile crisis, it nevertheless offers a vivid example of political, economic, and propagandistic rivalry between the U.S. and the USSR.

For Africa, this was a critical period characterized by decolonization and the formation of African countries' first foreign policies. The United States and the Soviet Union both hoped to win the sympathies of the newly established states, and Sergey Mazov's book is the first account of that competition, which the Soviet Union lost, largely through ignorance of the region.

Mazov presents evidence from previously inaccessible or unknown documents in Russian and U.S. archives, as well as an international sampling of recent scholarly works. The rich historical account pays particular attention to the repercussions of Soviet West African experience on future Soviet foreign policy, especially in the Third World.

Sergey Mazov is a professor and chief research fellow at the Institute of World History, Russian Academy of Sciences, in Moscow.

"This book addresses a subject on which almost nothing is available on the Russian side, and so it covers a very important 'blank spot of history'."

"For the first time, this book uncovers flaws in Soviet policy toward Africa, inherent weaknesses relating to the lack of resources and imagination, bureaucratic impediments and ignorance, which led eventually to failure to compete with the United States for the 'hearts and minds' of Africans."