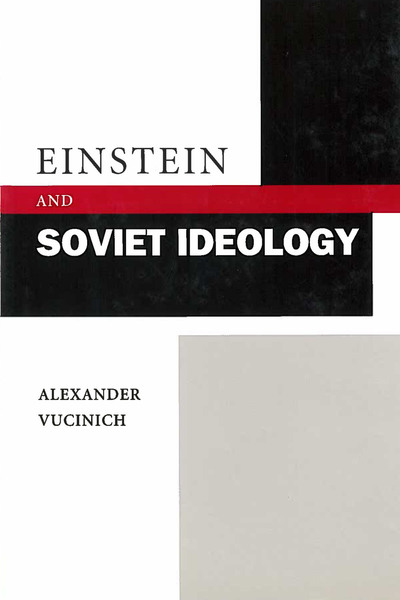 This book traces the historical trajectory of one of the most momentous confrontations in the intellectual life of the Soviet Union—the conflict between Einstein's theory of relativity and official Soviet ideology embodied in dialectical materialism.

Soviet attitudes toward Einstein's scientific and philosophical thought passed through several stages. During the pre-Stalin era, Marxist philosophers clashed over the problem of defining dialectical materialism in relation to the ongoing revolution in science. This controversy produced a full spectrum of Marxist attitudes toward the theory of relativity, ranging from complete acceptance to total rejection. Disunity also prevented Marxist writers from interfering with the work of those Soviet physicists who produced a rich literature extolling the theory of relativity.

During the Stalin era (1929-1953), conflicting forces in Marxist thinking were eliminated, and complete unity was established and firmly guarded by the state. Marxist theorists declared war on "idealistic" principles built into Einstein's scientific work. State harassment of leading physicists accused of idealistic digressions persisted throughout the Stalinist era. Several leading proponents of Einstein's ideas perished in political prisons. Despite all these pressures, some leading physicists used every opportunity to reaffirm their fundamental agreement with the theory of relativity as one of the fundamental contributions to twentieth-century scientific thought.

The post-Stalinist period (1953-1985) gradually evolved into a profound transformation of every domain of social and cultural life, and Einstein's scientific and philosophical legacy was no exception. Whereas Stalinist writers tried to reformulate Einstein's principles to accommodate dialectical materialism, post-Stalinist thinkers, much more familiar with modern physics than their predecessors, attempted to make Marxist philosophy sufficiently flexible to absorb the guiding principles of the theory of relativity. A wide range of Einstein's ideas, previously regarded as symptoms of bourgeois decadence, was now hailed as a cornerstone of the Marxist philosophy of science. The post-Stalinist era also produced an extensive and appreciative literature on the humanistic aspect of Einstein's thought.

The short-lived period of perestroika (1985-1991) accelerated the de-Stalinization process, post-Stalinist gains were solidified, and the theory of relativity was increasingly shorn of ideological burdens, thus removing one of the last remnants of the Stalinist war on science.

Alexander Vucinich is Professor of History and Sociology of Science Emeritus at the University of Pennsylvania. His most recent book is Darwin in Russian Thought.

"This book will be of interest to historians and philosophers of science. . . . Both in person and his writings, Alexander Vucinich made difficult subjects accessible and provided the foundations for others to extend studies into the history and philosophy of Soviet science."

"A rich meditation on cosmology, science, ethics, and the question of whether the modern world can afford unitary truths, Einstein is a fitting final gift of Vucinich, who passed away in May 2000." Common Knowledge

"For anyone with an interest in the relations between science and culture in the Soviet Union and Russia, the book is essential reading."