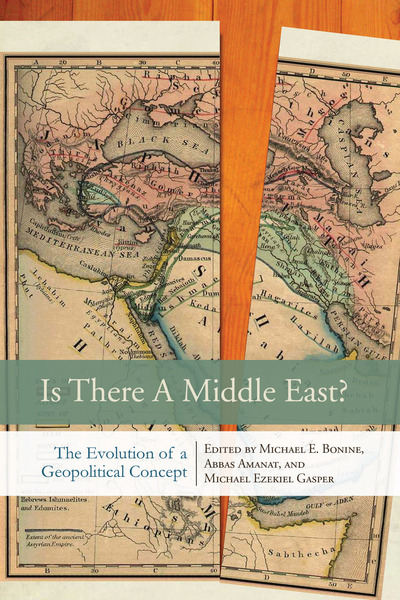 Is There a Middle East?
The Evolution of a Geopolitical Concept
Edited by Michael E. Bonine, Abbas Amanat, and Michael Ezekiel Gasper

Is the idea of the "Middle East" simply a geopolitical construct conceived by the West to serve particular strategic and economic interests—or can we identify geographical, historical, cultural, and political patterns to indicate some sort of internal coherence to this label? While the term has achieved common usage, no one studying the region has yet addressed whether this conceptualization has real meaning—and then articulated what and where the Middle East is, or is not.

This volume fills the void, offering a diverse set of voices—from political and cultural historians, to social scientists, geographers, and political economists—to debate the possible manifestations and meanings of the Middle East. At a time when geopolitical forces, social currents, and environmental concerns have brought attention to the region, this volume examines the very definition and geographic and cultural boundaries of the Middle East in an unprecedented way.

"Its interdisciplinarity and the mixture of established and emerging scholars are [a] significant strength, ensuring that both specialist and student readers are likely to find something new."

"This well-edited work focuses on geographically prescribed definitions of one of the most heavily contested and tumultuous parts of the world . . . [and clarifies] the definition of the region by insiders and outsiders . . . Recommended."

"The chapters comprising the volume reconfirm the indeterminacy and historical evolution of the Middle East as a geographical concept."

"Given how much debate surrounds the expression 'the Middle East,' it is all the more surprising that there has not been a single volume to address the range of questions raised by this vague and unhelpful term until now. Is There a Middle East? does an excellent job filling in this gap. There is nothing comparable."

"The term 'the Middle East' has evoked anxieties and questions for over a century. This original volume illustrates that it is ultimately more fruitful to consider the effects of this unwieldy and profoundly political category than to debate its definition. A far-reaching book that presents new arguments on the production of the concept and the meanings associated with the Middle East. It is a useful and reflective introduction to the field of 'Middle East Studies."