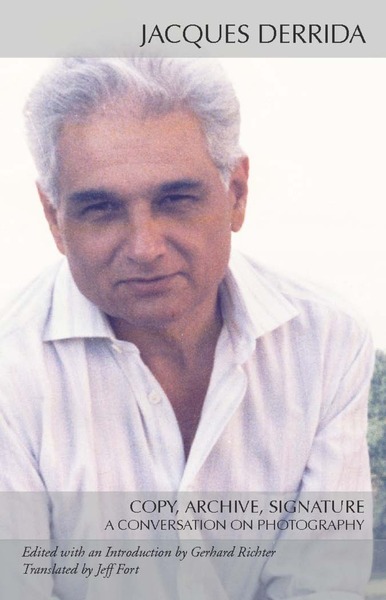 Copy, Archive, Signature
A Conversation on Photography
Jacques Derrida Edited and with an Introduction by Gerhard Richter Translated by Jeff Fort

This book makes available for the first time in English—and for the first time in its entirety in any language—an important yet little-known interview on the topic of photography that Jacques Derrida granted in 1992 to the German theorist of photography Hubertus von Amelunxen and the German literary and media theorist Michael Wetzel. Their conversation addresses, among other things, questions of presence and its manufacture, the technicity of presentation, the volatility of the authorial subject, and the concept of memory. Derrida offers a penetrating intervention with regard to the distinctive nature of photography vis-à-vis related technologies such as cinema, television, and video. Questioning the all-too-facile divides between so-called old and new media, original and reproduction, analog and digital modes of recording and presenting, he provides stimulating insights into the ways in which we think and speak about the photographic image today. Along the way, the discussion fruitfully interrogates the question of photography in relation to such key concepts as copy, archive, and signature. Gerhard Richter introduces the volume with a critical meditation on the relationship between deconstruction and photography by way of the concepts of translation and invention. Copy, Archive, Signature will be of compelling interest to readers in the fields of contemporary European critical thought, photography, aesthetic theory, media studies, and French Studies, as well as those following the singular intellectual trajectory of one the most influential thinkers of our time.

Jacques Derrida (1930–2004) was Director of Studies at the Ecole des Hautes Etudes en Sciences Sociales and Professor of Humanities at the University of California, Irvine. Among the most recent of his many books to have been translated into English are the two volumes of Psyche: Inventions of the Other (Stanford, 2007 and 2008).

Gerhard Richter is Professor of German and Director of the Graduate Program in Critical Theory at the University of California, Davis. He is the author of Thought-Images: Frankfurt School Writers' Reflections from Damaged Life (Stanford, 2007).

Jeff Fort is Assistant Professor of French at the University of California, Davis.

"Behind Derrida's remarks on photography stands a vast philosophical knowledge, as well as a keen interest in contemporary media and technology. Richter's introduction admirably situates the discussion both with respect to Derrida's overall work and with reference to certain contemporary interpretations of photography. I can hardly imagine another discussion of photography that would display the same theoretical and philosophical breath and incisiveness that Derrida and his partners bring to bear on the subject."

"The interview that composes this exquisite little book demonstrates again why Derrida remains one of our most cherished resources. Suggesting that we did not have to wait for the invention of photography to learn what it can teach us about memory, inscription, death, mourning, and even love—this is why he can associate the medium with thought in general—Derrida's meditations not only comprehend and anticipate recent developments in reproductive technologies, but they also tell us why we must remain today as concerned with photography's past and present as with its future." 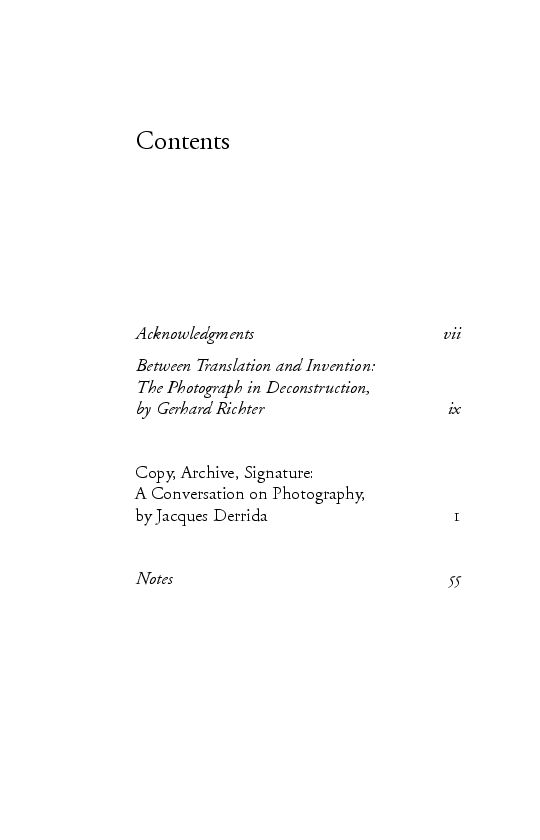