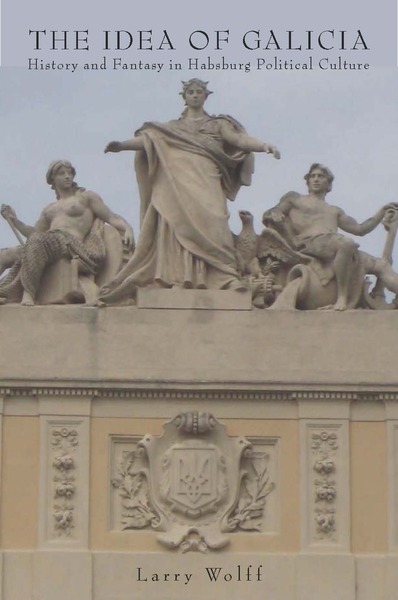 Galicia was created at the first partition of Poland in 1772 and disappeared in 1918. Yet, in slightly over a century, the idea of Galicia came to have meaning for both the peoples who lived there and the Habsburg government that ruled it. Indeed, its memory continues to exercise a powerful fascination for those who live in its former territories and for the descendants of those who emigrated out of Galicia.

The idea of Galicia was largely produced by the cultures of two cities, Lviv and Cracow. Making use of travelers' accounts, newspaper reports, and literary works, Wolff engages such figures as Emperor Joseph II, Metternich, Leopold von Sacher-Masoch, Ivan Franko, Stanisław Wyspiański, Tadeusz "Boy" Żeleński, Isaac Babel, Martin Buber, and Bruno Schulz. He shows the exceptional importance of provincial space as a site for the evolution of cultural meanings and identities, and analyzes the province as the framework for non-national and multi-national understandings of empire in European history.

Larry Wolff is Professor of History at New York University. His works include Venice and the Slavs (Stanford 2001) and Inventing Eastern Europe (Stanford 199

"We have a book that is so innovative in its approach, so broad in its inclusion of sources, and so brilliant in its examination of culture and zeitgeist in its account of over a century and a half of the Galician idea and reality that we can only admire the feast laid out before us. . . . For all intellectual historians Wolff's book is a treasure trove and a delight."

"The Idea of Galicia is highly recommended not only for those working on the modern history of Eastern Europe but also for anyone interested in the shaping of the modern world and modern culture. As an intellectual history that brings together the cultural, political, and social, the book will be extremely useful in a variety of graduate courses. The author is to be commended for producing a highly original, engaging, and powerful book, a real tour de force in the growing field of Galician studies."

"Brilliantly written, rich in factual details and insightful interpretations, this monograph establishes a new model for a history of the Eastern European imperial borderland."

"Wolff's way of telling the story of how the idea of Galicia evolved throughout the nineteenth century is a dense narrative in which a variety of sources are related or juxtaposed to create multiple contexts—historical, political, social, intellectual, cultural. . . The scope and quality of Larry Wolff's scholarship makes The Idea of Galicia an impressive achievement. Not only has the author made a major contribution to the history of Galicia and to historiography, but he has also set a high standard for historical writing."

"Not only will this be the definitive book on Galicia as a whole for years to come; it represents the best of modern intellectual history . . . For a historian of this period and place, The Idea of Galicia is a veritable treasure trove, one that rewards close reading with countless new and thought-provoking insights."

"[A] masterful intellectual history of the province."

"Wolff leads us through time, as Romanticism gives way to positivism, nationalist uprisings to self-critical historical revisionism, physical anthropology to modernist decadence. He leads us through railway stations and cabarets; political assassinations and marital infidelities; ethnographic expeditions and alcoholic trances; the eternal mud of villages and the condescension of Viennese philanthropy. Throughout, he strikes a masterly balance of animated engagement and critical fair-mindedness."

"Heartache, homeland, passion, obsession, fantasy: the idea of Galicia, Larry Wolff explains in this beautifully evocative study of the erstwhile Habsburg province, has followed an impressive trajectory . . . The author's voice is musical; the entire method of composition suggests sonata form: exposition, development, recapitulation. In this manner, recurring references to central themes, personages, and events are not repetitive, but pedagogically effective. By the end of the work, Wolff has constructed, rather than merely referenced, a Galician canon—a key set of moments, places, names, and ideas that anyone who wishes to understand the province must know and, thanks to the text, will know."

"Larry Wolff's The Idea of Galicia: History and Fantasy in Habsburg Political Culture is an extremely rich and engaging tale . . . [T]he learning experience it offers is greatly rewarding. I wholeheartedly recommend it and look forward to Larry Wolff's next major project, if only to see if he can top this one."

"With this impressive volume, Larry Wolff, professor of history at New York University, sets a high standard and has in many ways written a sequel to his Inventing Eastern Europe. Galicia is the perfect terrain for pursuing his enduring theme of how the Western Enlightenment recast the East as its backward, uncivilized, orientalized Other . . . Acknowledging the inspiration of Edward Said, Wolff has an unerring nose for the telling vignette or anecdote of a contemporary traveler to illuminate a postcolonial perspective on these distinctive variants of cultural imperialism."

"The Idea of Galicia is a magnificent addition to recent works on Galicia . . . [Wolff] brings the work of historians, anthropologists, and cultural critics to bear, always giving credit where it is due and applying arguments gleaned from others in new and original ways. The resulting unexpected juxtapositions and insights are stunning, thought provoking, and inspiring . . . This remarkable book is an impressive achievement."

"This is an admirable addition to an impressive body of scholarship by one of the most exciting historians working in the history of Eastern Europe. As always, Wolff tells the larger story in a clear and engaging style; he deftly weaves in the stories of the various competing peoples, from Polish conservatives to Ukrainian anarchists. The Idea of Galicia is a marvelous book that has given me much to think about."

"This book constitutes a superb contribution to the history of Habsburg Central Europe. Wolff beautifully recreates complex webs of understanding of Galicia and interrogates—often brilliantly—contemporary assertions about its meanings. He has excavated writings by a diverse set of authors; his immense erudition enables him to juxtapose their works in combinations that are occasionally startling, that produce unexpected insights, and that add layers of new meaning to existing ideas about Galicia."

"[A]s Wolff so admirably demonstrates, Galicia proved innitely more beneficial to its inhabitants than the successor states that claimed to be based on the self-determination of nationalities."

"[Larry Wolff is] a historian capable of grand synthesis . . . [The Idea of Galicia is] refreshingly free from terminological jargon, rich in sources, and overflows with imagination and insight." 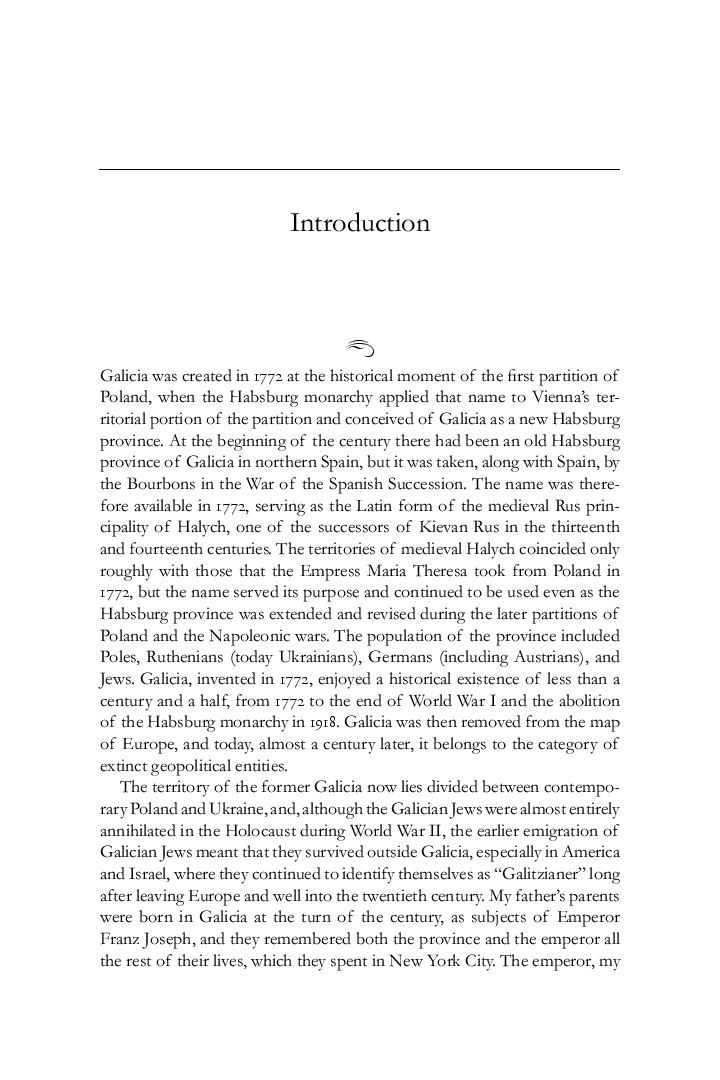 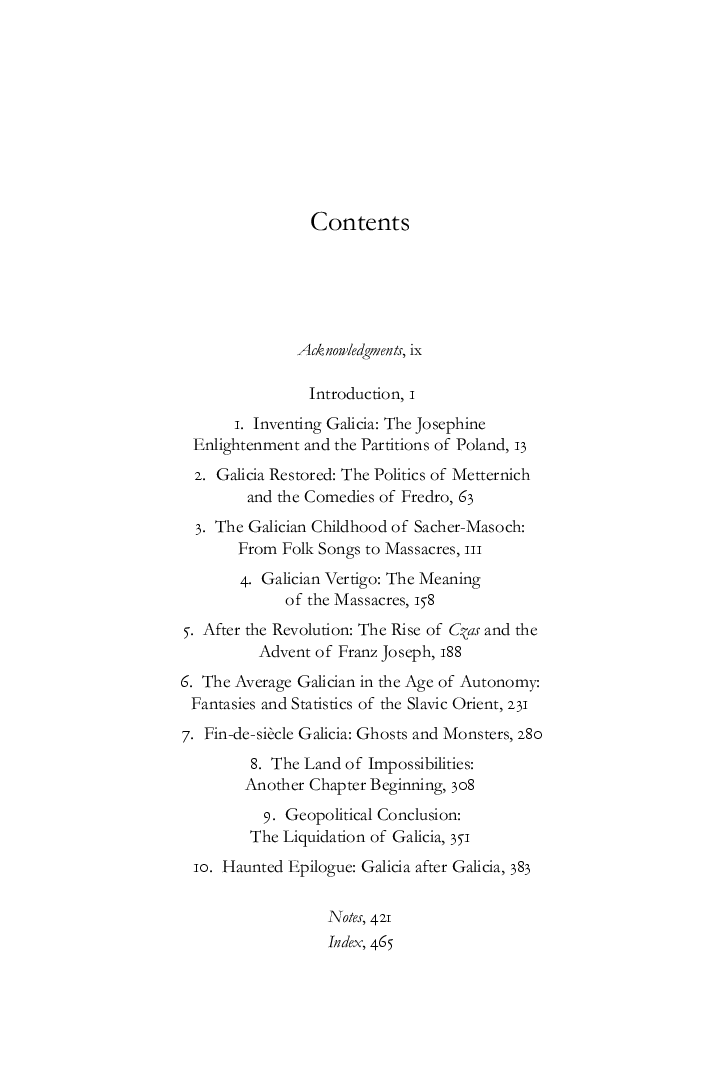