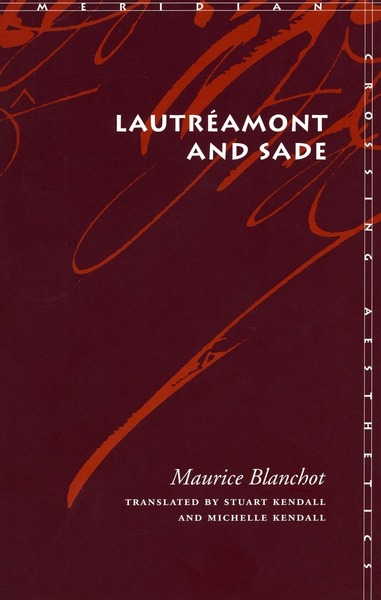 In Lautréamont and Sade, originally published in 1949, Maurice Blanchot forcefully distinguishes his critical project from the major intellectual currents of his day, surrealism and existentialism. Today, Lautréamont and Sade, these unique figures in the histories of literature and thought, are as crucially relevant to theorists of language, reason, and cruelty as they were in post-war Paris.

"Sade's Reason," in part a review of Pierre Klossowski's Sade, My Neighbor, was first published in Les Temps modernes. Blanchot offers Sade's reason, a corrosive rational unreasoning, apathetic before the cruelty of the passions, as a response to Sartre's Hegelian politics of commitment.

"The Experience of Lautréamont," Blanchot's longest sustained essay, pursues the dark logic of Maldoror through the circular gravitation of its themes, the grinding of its images, its repetitive and transformative use of language, and the obsessive metamorphosis of its motifs. Blanchot's Lautréamont emerges through this search for experience in the relentless unfolding of language. This treatment of the experience of Lautréamont unmistakably alludes to Georges Bataille's "inner experience."

Republishing the work in 1963, Blanchot prefaced it with an essay distinguishing his critical practice from that of Heidegger.