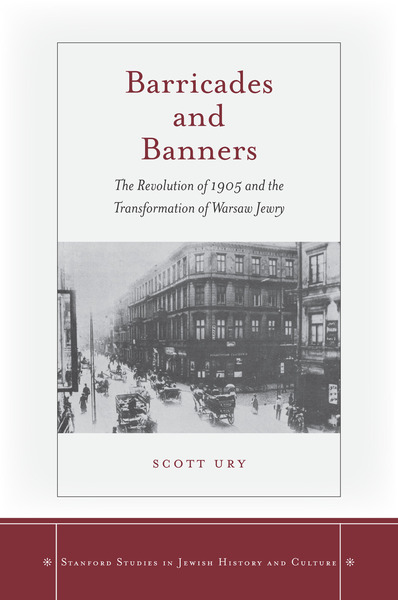 Barricades and Banners
The Revolution of 1905 and the Transformation of Warsaw Jewry
Scott Ury
SERIES: Stanford Studies in Jewish History and Culture

Winner of the 2013 Reginald Zelnik Book Prize in History, sponsored by ASEEES and the Institute of Slavic, East European, and Eurasian Studies at the University of California, Berkeley.

Commendation in the 2008 Fraenkel Prize, sponsored by the Wiener Library.

This book examines the intersection of urban society and modern politics among Jews in turn of the century Warsaw, Europe's largest Jewish center at the time. By focusing on the tumultuous events surrounding the Revolution of 1905, Barricades and Banners argues that the metropolitanization of Jewish life led to a need for new forms of community and belonging, and that the ensuing search for collective and individual order gave birth to the new institutions, organizations, and practices that would define modern Jewish society and politics for the remainder of the twentieth century.

Scott Ury is Senior Lecturer in Tel Aviv University's Department of Jewish History, where he also serves as head of the Stephen Roth Center for the Study of Contemporary Antisemitism and Racism.

"This rigorous and innovative book applies some of the central theoretical models of today's historical scholarship regarding nationalism, urbanization, and culture to modern Jewish history. In particular, Ury examines why modernity has been so cruel to the Jews; his conclusion is that the modern city generated a way of life that led to a sense of ennui for the Jewish individual, and hence to a personal and collective search for a way out of a perceived state of powerlessness."

"Ury's book presents a riveting discussion of the qualities and experience of the modern city and the development of a popular culture that gives its users a new sense of belonging. Ury shows how the 'ethno-linguistic community' develops and how it is quickly transformed into a coherent 'political community,' based on the foundations of ethnicity and language. He presents the reader the struggle between two such communities, Jewish and Polish, for the symbolic rule over the city of Warsaw, a conflict that directly influenced relations between 'the Poles' and 'the Jews' over the first half of the twentieth century."

"Scott Ury has written a fascinating book, long in coming, that contributes to a number of different discussions among historians of modern Jewish politics, Polish-Jewish relations, and the role of city of Warsaw in the transformation of political culture and discourse in the early twentieth century . . . This reviewer is essentially convinced by Ury's arguments, which are supported by evidence drawn from an extraordinary range of archival and other primary sources in several languages . . . Ury gives a fascinating discussion of the revolutionary culture of safe houses, code names, language, and holidays . . . Ury has produced an outstanding work of scholarship. He has raised a number of important questions into which he provides valuable insights that will force others to rethink their perspectives on key issues related to the evolution of political culture in early twentieth-century Poland and its periodization."

"In his Barricades and Banners, Scott Ury takes the reader on a fascinating journey through Warsaw at the beginning of the twentieth century . . . In this very successful 'microstudy of modern Jewish society and politics', focused on one of the largest Jewish urban populations in Europe at the beginning of the twentieth century, Ury questions the traditional approach of Jewish historiography, which has focused on Jewish communal institutions and emphasized the importance of these structures to Jewish history . . . Ury has succeeded in writing a wonderful book. He has not only collected valuable primary sources, but has applied fine methodological tools. He uses rich historical materials from diverse archives in Poland, Israel, and the United States, making this book especially valuable and placing it immediately in the canon of reading on Jewish history in Poland . . . Overall, this new study is an important contribution to the growing body of works devoted to the history of Polish Jews and especially their complex path to modernization."

"Ury successfully develops an intertwined history of urban life and political culture by accessing voices and experiences of daily life beyond those of the political and cultural elites . . . Barricades and Banners makes significant contributions to our understanding of modern eastern European Jewish life and the development of Jewish nationalism . . . The introduction to Barricades and Banners is essential reading not only for students of eastern European history but also for any student of modern Jewish history and historiography."

"This volume describes in a fresh and masterful manner the key stages and factors in the modernization of Warsaw (and east European) Jewry at the beginning of the nineteenth century. It is probably one of the most important studies of east European Jewry written in the last twenty years. With exceptional precision and nuance, it covers urbanization, political activity, new social patterns, ethnicity, and the image of the Jews in Poland. Ury brings to the topic great understanding of the complexities of the various population groups, Jewish and non-Jewish, and uses original approaches to describe how they dealt with a new political and social environment. This copiously documented study is essential for an understanding of the radical shift in religious patterns among Polish Jewry in the twentieth century. Ury's strikingly objective description of the changing patterns of relations between Jews and other Poles is essential reading for an understanding of these relations later in the century. It is very well written and should attract students to further study of the topics it raises."

"Scott Ury's superb book is a richly textured history of Jews and the revolution of 1905 in Warsaw, exploring the multifaceted significance of the event(s) from 1904 to 1907 and beyond. Its well-defended thesis is that Warsaw's Jews sought to harness their communal energy and resources, but more crucially, impose 'order'—to make sense of their rapidly changing surroundings and exert control over how politics were developing . . . A novel and outstanding feature of Barricades and Banners is Ury's expertise in crafting an expressly urban history . . . With Barricades and Banners scholars of Eastern Europe are fortunate to have a more animated and sophisticated perspective on turn-of-the-century Warsaw Jewry than any which has come before."

"This interestingly written and richly documented book (some 125 of the 400 total pages are devoted to footnotes and bibliography) presents its argument in a clear and logical manner, first setting the scene with descriptions of turn-of-the-century Warsaw and its Jewry (chapters 1–2), followed by fascinating analyses of the generation of mostly young Jewish revolutionaries and their activities (chapter 3) and the growth of the Jewish public sphere (chapter 4) . . . Ury makes an important contribution to the history of Polish politics and Polish antisemitism through his insight that the political changes engendered by the revolution of 1905 and the development of Jewish politics were crucial factors in the growth of Polish antisemitism as a political movement. The author convincingly demonstrates the interdependence between Jewish and Polish politics, with ideological and organizational stances reflected in one another . . . Barricades and Banners is an important contribution to rebalancing the historical narrative. This excellent book should be of great interest to students of Jewish history, Polish history, and Russian history."

"Barricades and Banners is elegantly written, and captures the reader's attention with its brilliant and methodical analysis, letting its sources speak for themselves . . . Ury's book is a well-founded and highly innovative contribution to one of the classical questions of Jewish and Eastern European history. Its style is appealing and its arguments set the reader's mind in motion."

"Ury offers a grand explanation for the breakdown of traditional authorities and the rise of new power structures that focus on the tectonic shifts underlying the institutional underpinnings of society rather than the surface changes. By turning his attention to the twentieth century instead of Katz's eighteenth and by bringing in newer cultural modes of thought, Ury illuminates different facets of these modernizing trends. With his impressive debut book, Ury has firmly established himself as a worthy heir to Katz's legacy. It is essential reading for historians of the Russian, Polish, and Jewish experiences."

"Scott Ury's excellent Barricades and Banners shows that the revolution still has much to offer historians . . . Scrupulous with evidence and careful not to draw conclusions beyond what it can sustain, Ury's account is well written and effectively argued . . . [T]he fact that this book stimulates its readers to want to learn more is evidence of its merit."

"[A] splendidly researched monograph about the transformation of Warsaw Jewry during the revolutionary years of 1905-1907 . . . [I]mpressive linguistic skill in utilizing sources in Yiddish, Hebrew, and Polish and thorough grounding in the respective Polish and Jewish historiographies. While his book is above all a study of the creation of a single ethnolinguistic community in a particular city, it speaks broadly to matters of urban history, Polish history, Jewish history, and the history of modernity."

"This major study is a valuable account of the emergence of mass politics in the Polish lands and how this greatly complicated the problem of finding an appropriate place for Poland's large, unassimilated Jewish minority."

"Sometimes, historians are able to place their hands on particular historical moments that reflect social, political and intellectual processes that end up shaping an entire era. This is exactly what the historian Scott Ury does in his book Barricades and Banners . . . The author doesn't just tell the story of Jews and Poles in Russian-occupied Warsaw, but through this account he also gives a brief history of the twentieth century in Eastern and Central Europe."

"Ury contends that modern Jewish political identity was forged in Warsaw after the Russian Revolution of 1905 . . . The author uses a wealth of primary sources to describe how Jews adapted to life in the big city . . . A well-researched study of the urban roots of modern Jewish national politics and identity. Highly recommended."

"Scott Ury is one of the brightest and most gifted of the younger historians of Jewish Eastern Europe. His new book on Jewish Warsaw is full of fresh perspectives that show the important impact of urbanization on the development of Polish Jewry."

"The intensively and insightfully researched book sheds much needed light on how an important segment of Jewry in the Russian Empire encountered and reacted to modernity, and decided to create their own separate modern society . . . ground-breaking work."

"Ury's study covers the society of Jewish Warsaw, its political life, cultural life, the Jewish public sphere, and the impact of electoral political on Polish-Jewish relations during the revolution of 1905 . . . Barricades and Banners is an important new study of Europe's then-largest Jewish community and its transformation during the critical period of the 1905 revolution."

"Ury implicitly calls on scholars to think through the lessons and legacies of Russian Poland to arrive at a better understanding of modern Jewish politics. It is this repositioning of ethno-cultural political lenses that makes Barricades and Banners a groundbreaking contribution to both Jewish and Polish studies." 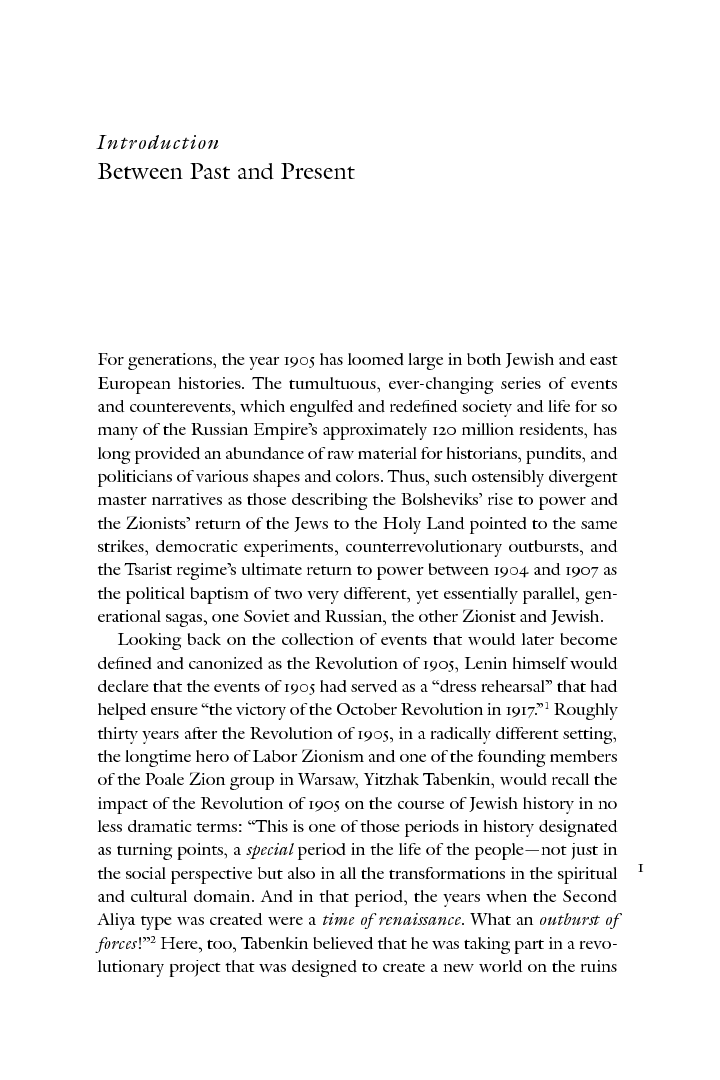 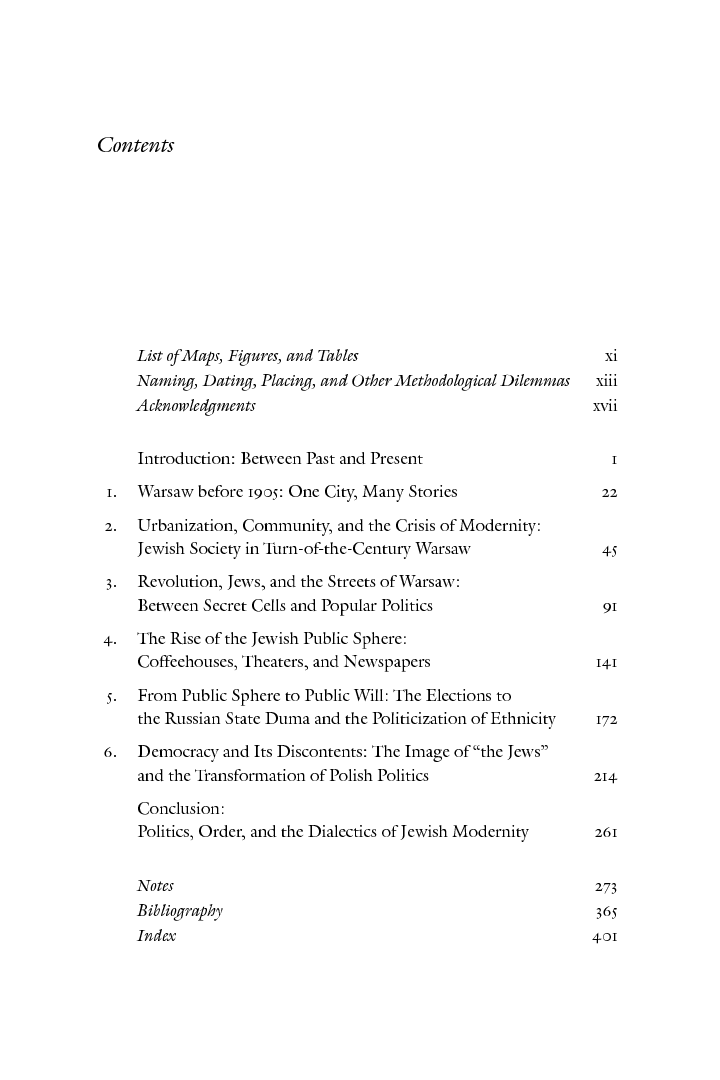