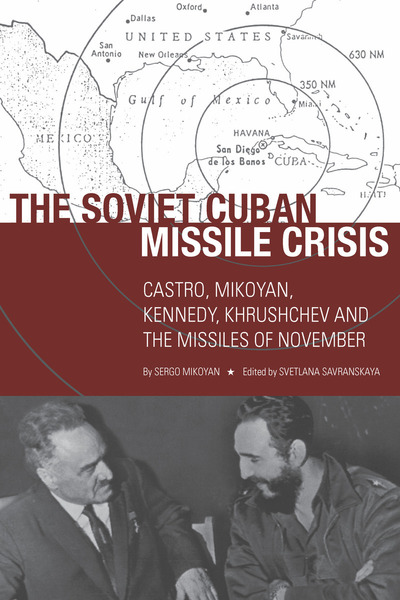 Based on secret transcripts of top-level diplomacy undertaken by the number-two Soviet leader, Anastas Mikoyan, to settle the Cuban Missile Crisis in 1962, this book rewrites conventional history. The "missiles of October" and "13 days" were only half the story: the nuclear crisis actually stretched well into November 1962 as the Soviets secretly planned to leave behind in Cuba over 100 tactical nuclear weapons, then reversed themselves because of obstreperous behavior by Fidel Castro. The highly-charged negotiations with the Cuban leadership, who bitterly felt sold out by Soviet concessions to the United States, were led by Mikoyan.

Adding personal crisis, Mikoyan's wife of more than 40 years died the day he arrived in Havana, yet he stayed to resolve the crisis through direct talks in Havana, New York, and Washington, amid constant communications with Moscow.

The author, Sergo Mikoyan, who served as his father's personal secretary during these travels, vividly recalls how the Soviet relationship with revolutionary Cuba began and how it was shaped by the crisis.

Sergo Mikoyan, who died in 2010, was a historian specializing in Latin America and in Soviet-Latin American relations.

Svetlana Savranskaya is a research fellow at the National Security Archive at George Washington University.

"Expertly edited by Svetlana Savranskaya, the director of Russian programs at the National Security Archive, the book is an invaluable and essential resource for understanding the Cuban Missile Crisis. Summing Up: Essential."

"This marvelous volume by Mikoyan's late son, appearing only now in English, recounts the tough negotiations that followed between his father, the Cuban leadership, and the Kennedy administration . . . The book's appendix features 50 documents carefully selected from Mikoyan's personal papers and Soviet archives that offer many fascinating glimpses of some leading personalities of the Cold War era."