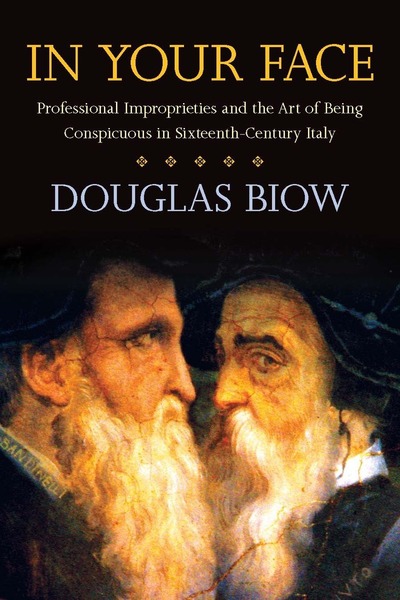 In Your Face concentrates on the Renaissance concern with "self-fashioning" by examining how a group of Renaissance artists and writers encoded their own improprieties in their works of art. In the elitist court society of sixteenth-century Italy, where moderation, limitation, and discretion were generally held to be essential virtues, these men consistently sought to stand out and to underplay their conspicuousness at once. The heroes (or anti-heroes) of this book—Michelangelo Buonarroti, Benvenuto Cellini, Pietro Aretino, and Anton Francesco Doni—violated norms of decorum by promoting themselves aggressively and by using writing or artworks to memorialize their assertiveness and intractable delight in parading themselves as transgressive and insubordinate on a grand scale. Focusing on these sorts of writers and visual artists, Biow constructs a version of the Italian Renaissance that is neither the elegant one of Castiglione's and Vasari's courts—so recently favored in scholarly accounts—nor the dark, conspiratorial one of Niccolò Machiavelli's and Francesco Guicciardini's princely states.

Douglas Biow is Professor of Italian & Comparative Literature, Director of the Center for European Studies, and Superior Oil Company Linward Shivers Centennial Professor in Medieval and Renaissance Studies at the University of Texas at Austin. He is the author of The Culture of Cleanliness in Renaissance Italy (2006).

"The fascinating case studies of In Your Face . . . offer stimulus and insight not only to historians of creativity and artistic production, but to scholars interested in the inexhaustible question as to how individual identity was conditioned by, and influenced, contemporary society."

"This is a book to read and also to revisit for subsequent readings . . . Students of the Italian Renaissance will find much that is at once familiar and fresh in this intriguing volume."

"A new take on the much mentioned self-fashioning in The Renaissance is to be found in Douglas Biow's remarkable book In Your Face . . . Here we are introduced to Italian masters such as Aretino, Castiglione, Cellini, Anton Francesco Doni, and Michelangelo as they promote not only their artistic works but their individual careers."

"Biow offers many thoughtful and insightful readings of both literary texts and artistic images, and his approach is a testimony to his ability to cross disciplines and unite the literary, the art historical, and the historical."

"This latest book is [Biow's] most original and challenging contribution yet."

"Clearly influenced by the project of Renaissance self-fashioning, Biow is intrigued by those figures who appeared to defy all the rules for getting ahead in the dominant court culture of the period and yet who nonetheless found patrons or customers . . . As a literary scholar Biow spends most of his time unfolding the meaning of the textual self-representations of his selected individuals, emphasizing in his interpretations the importance to them of work. This is a helpful counterbalance to the usual sixteenth-century discourse of nobility that disparages both manual labor and commerce."

"Once again, Douglas Biow gives us a clear, clever, engaging rethinking of a crucial aspect of Italian Renaissance culture and life. This truly unique work is highly intelligent, exciting, and thought-provoking."

"Douglas Biow's In Your Face is a fascinating study of the nature of literary and artistic eccentricity in late Renaissance Italy. He reminds us that, in an era in which writers such as Castiglione polished the image of the perfect courtier, many of the most interesting figures were deliberately and provocatively uncouth. This is a terrific, thought-provoking book." 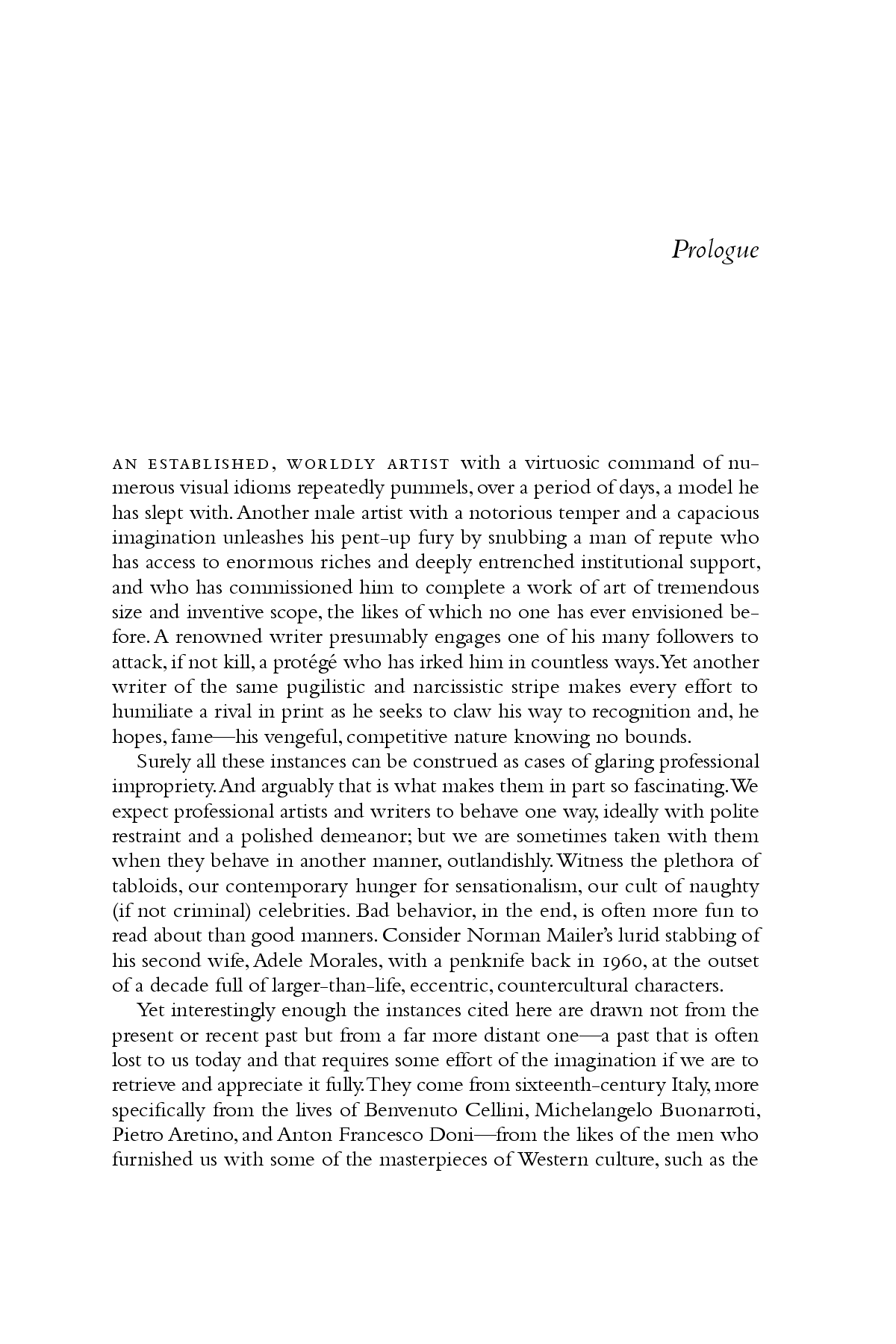 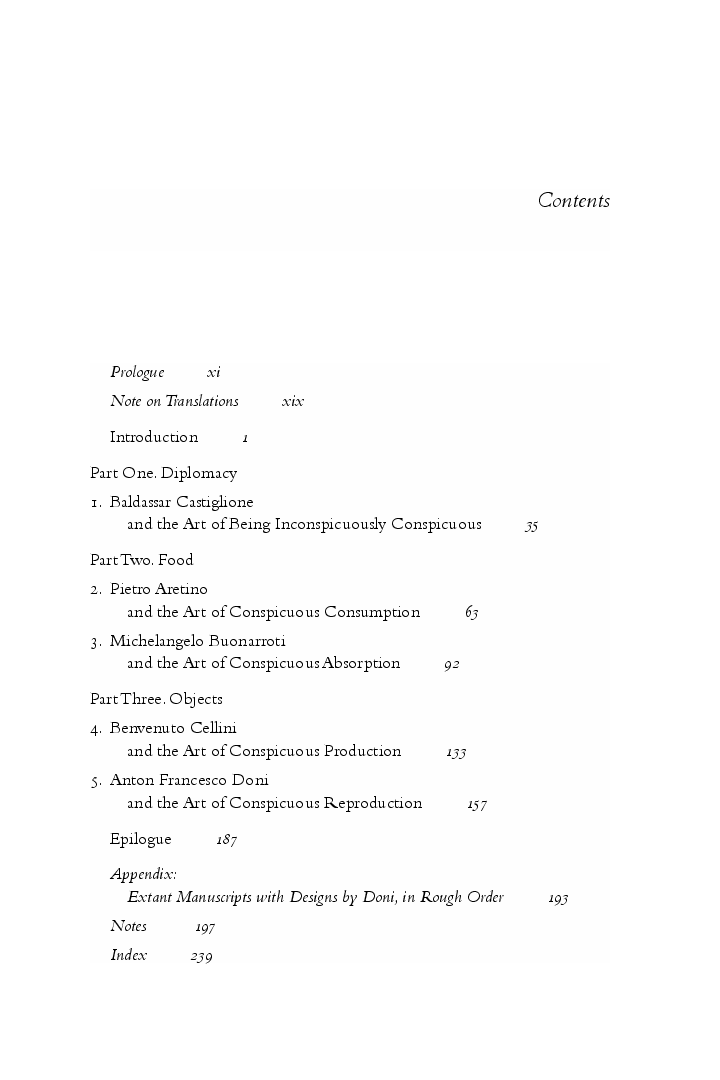