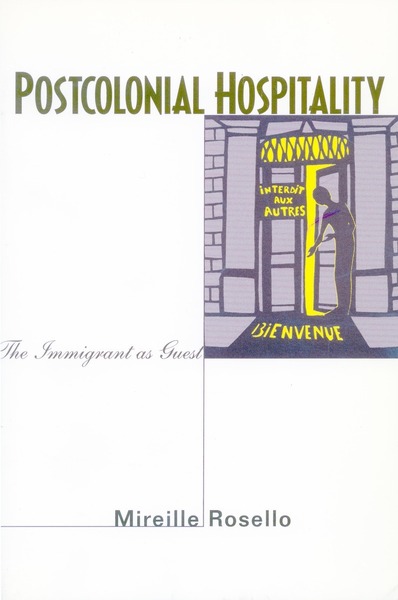 In recent years, hospitality has emerged as a category in French thinking for addressing a range of issues associated with immigration and other types of journeys. Rosello's book concentrates primarily on France and its former colonies in North and sub-Saharan Africa and considers how hospitality and its dissidence are defined, practiced, and represented in European and African fictions, theories, and myths at the end of the twentieth century. Postcolonial Hospitality explores the ways in which Western superpowers rewrite ideals of hospitality that are borrowed from a variety of sources and that sometimes constitute an incompatible system of values.

Each chapter focuses on a problematic moment when hospitality is read either as excessive or lacking: when the host does not give what is ideally expected; when the guest is mistreated rather than protected; when the guest abuses the host rather than being grateful. In considering these issues, the author examines the relationship between ownership and generosity, focusing specifically on the connections among nationalism, immigration, and hospitality. Because the intersections between cultural differences and issues of gender often expose the fragility or arbitrariness of hospitable conventions, the author studies novels, films, and immigrant interviews that explore those moments of crisis when systems of hospitality clash.

Mireille Rosello is Professor of French and Comparative Literary Studies at Northwestern University. Her most recent book is Declining the Stereotype: Representation and Ethnicity in French Culture.

"This timely book anticipated the wave of anti-immigrant reactions revealed by the spring elections in France and other European Union (EU) states. . . . Postcolonial Hospitality contributes to the immigration debate and to the interpretation of contemporary culture, within France and beyond its borders."

"Rosello's analysis is rich and wide-ranging. It deepens understanding of the material she discusses and makes one eager to see the films and read the novels she analyzes."

"...Rosello's book represents an important contribution to the fields of immigration and identity studies; it bridges the gap between the political and the literary, demonstrating not only the power of social discourse to shape cultural production, but also the power of metaphor to shape the everyday world."