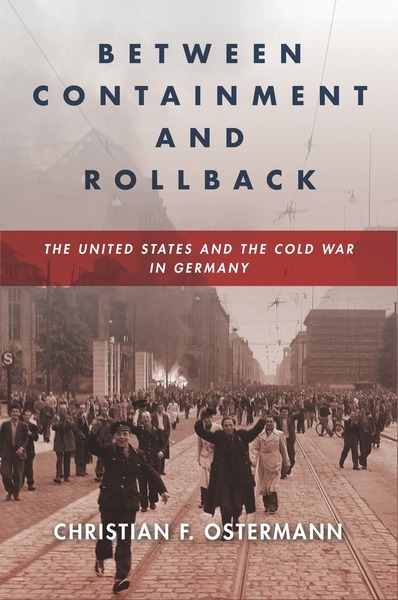 Winner of the 2022 Richard W. Leopold Prize, sponsored by the Organization of American Historians.

Honorable Mention in the 2022 The Michael H. Hunt Prize for International History, sponsored by the Society for Historians of American Foreign Relations (SHAFR).

In the aftermath of World War II, American policymakers turned to the task of rebuilding Europe while keeping communism at bay. In Germany, formally divided since 1949,the United States prioritized the political, economic, and, eventually, military integration of the fledgling Federal Republic with the West. The extraordinary success story of forging this alliance has dominated our historical under-standing of the American-German relationship. Largely left out of the grand narrative of U.S.–German relations were most East Germans who found themselves caught under Soviet and then communist control by the post-1945 geo-political fallout of the war that Nazi Germany had launched. They were the ones who most dearly paid the price for the country's division. This book writes the East Germans—both leadership and general populace—back into that history as objects of American policy and as historical agents in their own right

Based on recently declassified documents from American, Russian, and German archives, this book demonstrates that U.S. efforts from 1945 to 1953 went beyond building a prosperous democracy in western Germany and "containing" Soviet-Communist power to the east. Under the Truman and then the Eisenhower administrations, American policy also included efforts to undermine and "roll back" Soviet and German communist control in the eastern part of the country. This story sheds light on a dark-er side to the American Cold War in Germany: propaganda, covert operations, economic pressure, and psychological warfare. Christian F. Ostermann takes an international history approach, capturing Soviet and East German responses and actions, and drawing a rich and complex picture of the early East–West confrontation in the heart of Europe.

"For a quarter century Christian Ostermann has been a leader in the effort to gain access to the archives of former communist countries. Now, employing a vast trove of East German and Russian documents, as well as those from Western governments, he offers us a vivid description and penetrating analysis of the struggle to shape the future of Germany after World War II. The book beautifully illuminates the complex interactions of military occupation officials, policymakers in Moscow, Washington, London, and Paris, and German actors in the eastern and western zones. Everyone interested in the early Cold War should read this volume."

"Between Containment and Rollback is a model of outstanding historical research and argumentation. It is that rare work of scholarship that truly captures the contingency of events and circumstances leading to the division of Germany, as well as the different perspectives and motives which animated the United States and the Soviet Union. The description of the covert psychological campaign against East Germany illuminates both the potential and the very real limits of American power, with important lessons for contemporary foreign policy. A genuine tour de force!"

"Christian Ostermann's engaging work recasts the start of the Cold War showing that the US was far more deeply engaged in East Germany than historians have understood. Ostermann provides a detailed picture of debates about policy toward East Germany within the US government and the ways in which West German influence circumscribed and ultimately softened that policy. Examining deliberations in Washington, Moscow, Berlin and Bonn, while never losing a sense of life on the ground for Eastern Germans, this book offers a compelling international history of early Cold War developments in Germany."

"Ostermann tells a story that remains relevant today. In a world where Americans again face the clash of authoritarian governments and democracies, debates about the parameters of American policy and the potential and limits of engagement are no less challenging."

"This book is a pivotal contribution to the vast literature on Cold War Germany, writing East Germany and its people back into that history as a key issue in its own right. Ostermann's study is a model of outstanding international history, capturing the contingency and context of events leading to the division of Germany."

"A relatively short review can barely do justice to the richness of a learned and readable study such as this one. But there can be no doubt that with this book we have a rare and most valuable piece of work: a monograph on a thoroughly researched subject that manages to tell an original and highly insightful story. It has been well worth the wait."

"Ostermann in this meticulously researched account has written a book that will challenge many of the traditional narratives regarding the Cold War and modern German history. Recommended."