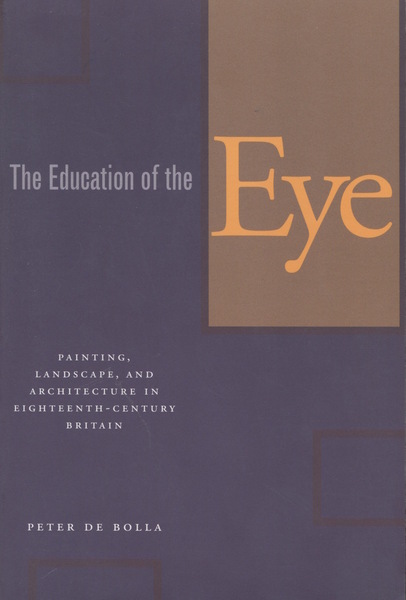 The Education of the Eye
Painting, Landscape, and Architecture in Eighteenth-Century Britain
Peter de Bolla

The Education of the Eye examines the origins of visual culture in eighteenth-century Britain. It claims that at the moment when works of visual art were first displayed and contemplated as aesthetic objects two competing descriptions of the viewer or spectator promoted two very different accounts of culture. The first was constructed on knowledge, on what one already knew, while the second was grounded in the eye itself. Though the first was most likely to lead to a socially and politically elite form for visual culture, the second, it was held, would almost certainly end up in the chaos of the mob. But there was another route through these conflicting accounts of the visual that preserved the education of the eye while at the same time allowing the eye freedom to enter into the realm of culture. This third route, that of the sentimental look, is explored in a series of contexts: the gallery, the pleasure garden, the landscape park, and the country house. The Education of the Eye sets out to reclaim visual culture for the democracy of the eye and to explain how aesthetic contemplation may, once more, be open to all who have eyes to look.

The book will interest historians of eighteenth-century British culture and historians of architecture, art, and landscape, as well as readers generally curious about the origins of our current visual culture.

Peter de Bolla is a Fellow at King's College, Cambridge. His most recent book is Art Matters (2001).

"...The detailed analyses and discussions of the various ways of looking are both fascinating and illuminating."

"De Bolla's The Education of the Eye is a significant contribution to both the ongoing delineation of 'visual culture' as a field of inquiry, and to the reading of eighteenth-century public space."