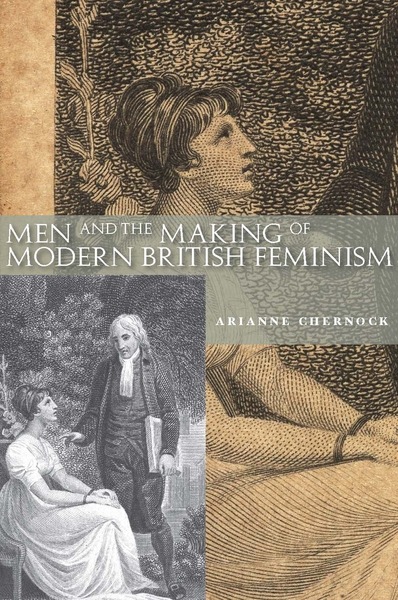 Men and the Making of Modern British Feminism
Arianne Chernock

Men and the Making of Modern British Feminism calls fresh attention to the forgotten but foundational contributions of men to the creation of modern British feminism. Focusing on the revolutionary 1790s, the book introduces several dozen male reformers who insisted that women's emancipation would be key to the establishment of a truly just and rational society. These men proposed educational reforms, assisted women writers into print, and used their training in religion, medicine, history, and the law to challenge common assumptions about women's legal and political entitlements.

This book uses men's engagement with women's rights as a platform to reconsider understandings of gender in eighteenth-century Britain, the meaning and legacy of feminism, and feminism's relationship more generally to traditions of radical reform and enlightenment.

Arianne Chernock is Assistant Professor of History at Boston University.

"Arianne Chernock has produced an impressive survey of the male writers, educationalists, political philosophers, and publishers who worked within the late Enlightenment in Britain, whom she terms 'feminists' . . . Chernock shows the potential for a deeper, nuanced, and critical account of feminism through the inclusion of men; this is a trend that will hopefully produce similar accounts of male feminists in other periods and settings."

"But in this thoughtful and lucidly argued book, Chernock illuminates some of the strengths and weaknesses of male feminism in the late British enlightenment . . . The main achievement of Chernock's study is to demonstrate that, far from being merely another radical 'ism' that 'missed its moment', feminism was a central feature of late British Enlightenment thinking, and as such a major contribution to the radical programme that transformed the nineteenth and twentieth-century political landscape."

"[Chernock] sheds light on the tensions and contradictions in the debates concerning women's roles, sex differences, and gendered roles among radical thinkers and rational Dissenters at the time of the commemoration of the centennial of the Glorious Revolution and on the eve as well as at the beginning of the French Revolution . . . Chernock demonstrates that the question of women's rights was not marginal in radical debates."

"This is a fascinating and important study, which shows convincingly that nineteenth-century male feminists such as William Thompson and John Stuart Mill should not be seen as 'isolated or exceptional male spokesmen for women's rights', but, rather, that they were the successors to a surprisingly substantial cadre of male feminists arguing for reforms of various kinds in the 1790s and beyond . . . In this well written and concise book . . . Chernock argues persuasively for the importance of male feminism in the 1790s . . . [A] most enjoyable and profitable read."

"Anyone interested in the early history of feminist contestation in the West should read [Men and the Making of Modern British Feminism]. Seeking to show how a commitment to women's rights fits into the discourses of reformist and radical culture more generally, Chernock carefully discriminates among the various arguments that were being developed in the name of reform, including Lockean liberalism, republicanism, rational dissent, Utilitarianism, sentimentalism, and constitutionalism, each of which advanced a different sense of what 'women's rights' meant or could mean and how and to what ends such rights should be affirmed and put into practice."

"This book brings together significant recent research on previously little-known male defenders of women's rights and an interpretive framework within which the works and lives of these individuals may be understood. Men and the Making of Modern British Feminism presents a challenging and original argument that will undoubtedly provoke responses and disagreements."

"Men and the Making of Modern British Feminism throws a different light on many of the complexities and contradictions in the late Enlightenment's attitude to women and sex equality by taking the perspective of radical males. Chernock's analysis is multi-layered and eschews easy solutions and conclusions. This is a very important book that will make a major contribution to an area that is just beginning to be studied." 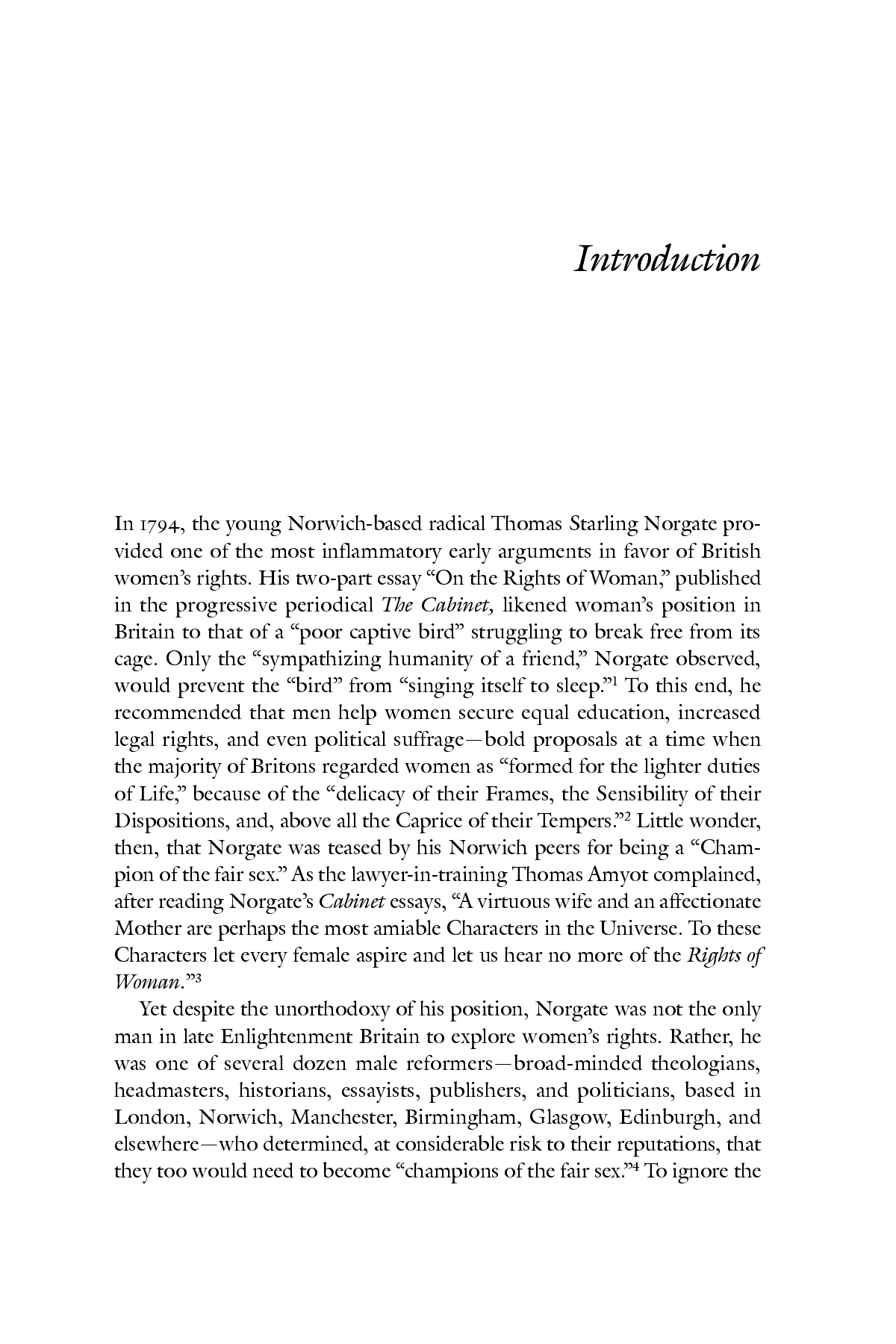 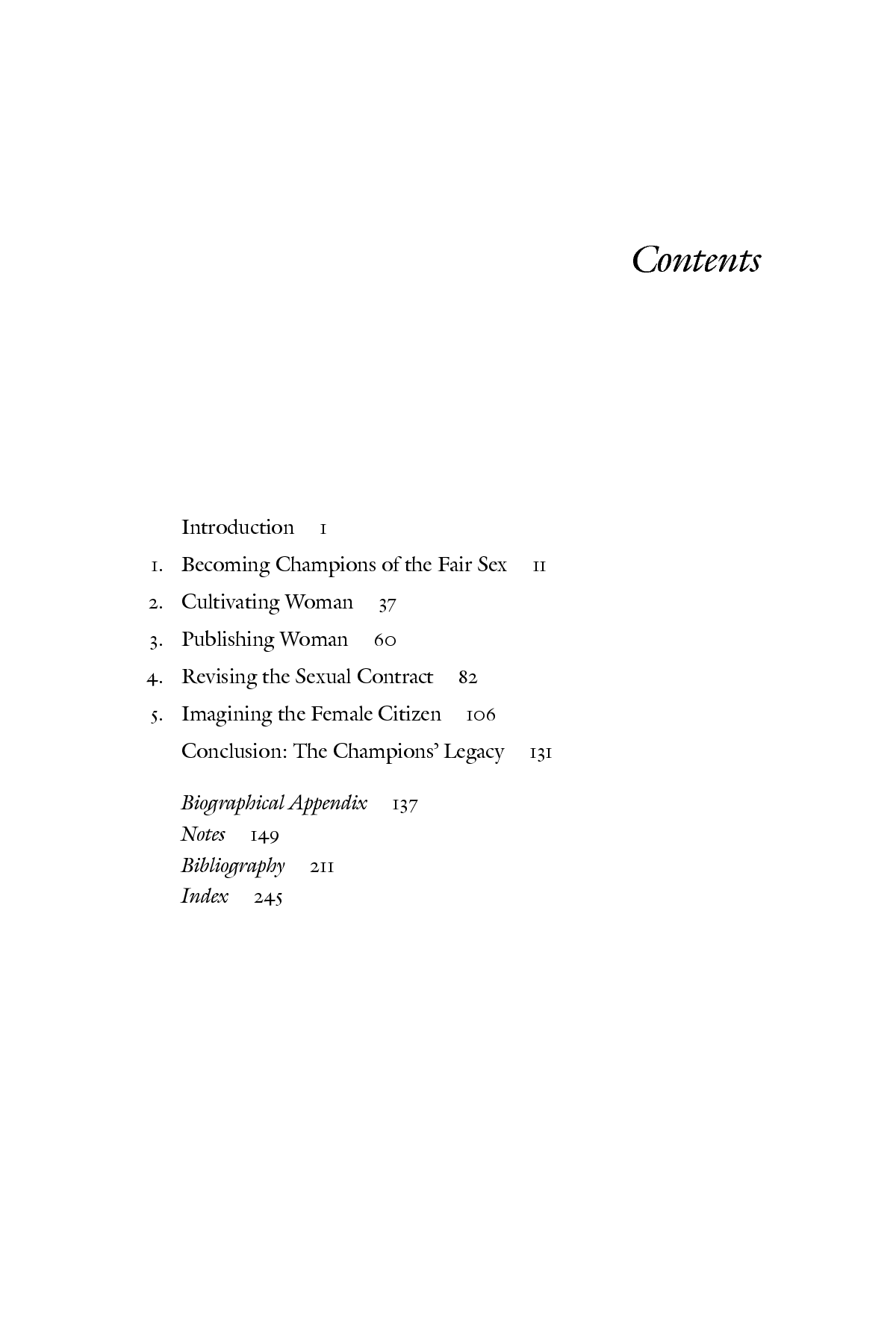