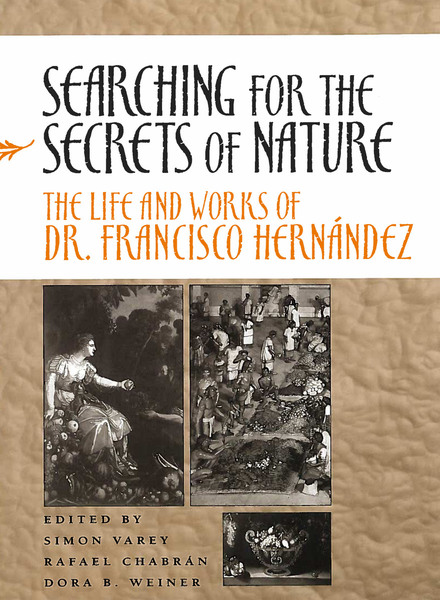 Searching for the Secrets of Nature
The Life and Works of Dr. Francisco Hernández
Edited by Simon Varey, Rafael Chabrán, and Dora B. Weiner

This collection of essays by historians, historians of science and medicine, and literary and textual scholars—from the United States, Canada, Mexico, and Spain—analyzes the achievements of Dr. Francisco Hernández (1515-87) in the history of medicine and science in Europe and the Americas. Celebrated in his own day as one of Spain's leading physicians and naturalists, he is now best remembered for his monumental work on the native plants and materia medica of central Mexico.

Sent to New Spain in 1570 by King Philip II to research and describe the natural history of the region, to assess the medical usefulness of the natural resources, and to gather ethnographic materials for an anthropological history, Hernández was the first trained scientist to undertake scientific work in the New World. For seven years he gathered information throughout the Valley of Mexico, learning Nahuatl, recording local medical customs, studying indigenous medicines, and writing down all his observations. The result was The Natural History of New Spain, written in Latin, which consisted of six folio volumes filled with descriptions of over 3,000 plants previously unknown in Europe (along with descriptions of a much smaller number of animals and minerals) and ten folio volumes of paintings by Mexican artists illustrating the plants and animals he described.

Hernández died before he could publish his Natural History, and the materials were placed in the Escorial, where they were extensively consulted, copied, abstracted, and translated by generations of scientists, medical specialists, and natural philosophers before they were destroyed by fire in 1671. Hernández's work was still regarded as authoritative on a number of New World botanical topics as late as the nineteenth century, and his writings remain in use in popular form in Mexico today.

The sixteen essays in this volume treat the most important aspects of Hernández's experience, including his education, his heterodox beliefs, and the state of medicine in both Spain and New Spain during his era. Other essays show the dissemination of the knowledge Hernández accumulated, including his contributions to European botany and materia medica, his relationship to Spanish Baroque painting, the "globalization" of his work in the eighteenth century, and his place in nineteenth-century debates among Spanish scientists.

"These books represent a remarkable scholarly achievement and a splendid tribute to a remarkable man who linked two rich civilizations."

"This is a fundamental contribution in the English language to the study of natural history of the New World, Mexico in particular, in the Renaissance, which must be placed on every reading list of courses on the encounters with the New World."

"Enlightening and entertaining to pick up and look for areas of specific reader interest."