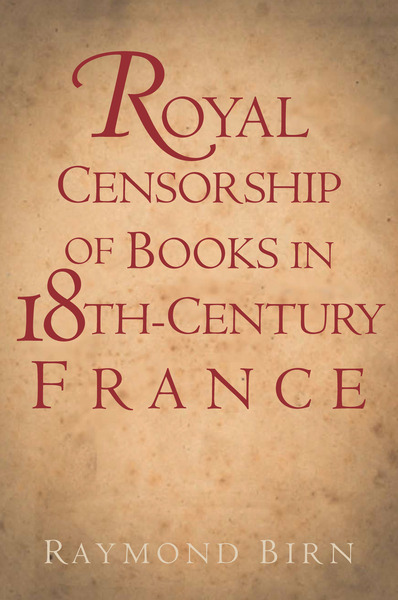 Today, we are inclined to believe that intellectual freedom has no greater adversary than the censor. In eighteenth-century France, the matter was more complicated. Royal censors envisioned themselves not as fulfilling a mission of state-sponsored repression but rather as guiding the literary traffic of the Enlightenment. By awarding pre-publication and pre-distribution approvals, royal censors sought to insulate authors and publishers from the scandal of post-publication condemnation by parliaments, the police, or the Church. Less official authorizations were also awarded. Though censors did delete words and phrases from manuscripts and sometimes rejected manuscripts altogether, the liberal use of tacit permissions and conditional approvals resulted in the publication and circulation of books that, under a less flexible system, might never have seen the light of day. In essence, eighteenth-century French censors served as cultural intermediaries who bore responsibility for expanding public awareness of the progressive thought of their time.

Raymond Birn is Professor Emeritus of History at the University of Oregon. His most recent books are Forging Rousseau: Print, Commerce and Cultural Manipulation in the Late Enlightenment (2001) and Crisis, Absolutism, Revolution: Europe and the World, 1648-1789 (2005).

"Birn's book thus provides an important implicit judgement about the precarious position of the standing political structure . . . [O]verall, Birn has . . . demonstrated the value of book history and claimed again his rightful place within it."

"Raymond Birn's masterful new work focuses on the early-middle periods and on the middle-high social world of eighteenth century letters. As such, it is a useful corrective and counterbalance to several decades of scholarly emphasis on subversive literature, cultural scandal, and the moral unraveling of the Old Regime. Expanding upon a series of lectures delivered at the Collège de France and published in French in 2007, this short, elegant book is the best overview of the prerevolutionary system of French censorship available in any language. It will be a valuable resource for researchers and students of the Enlightenment and of the history of censorship more generally."

"Birn's overview of the censorship structure simultaneously encompasses a large scope and provides a wealth of detail. By underscoring the censors' scholarly knowledge, Birn suggests that their decisions were shaped by wider developments in the French cultural landscape as well as by their responsibility to defend the absolutist regime. Historians working on eighteenth-century France have often been drawn to the drama of the forbidden book trade but this study underscores the need to think just as closely about the much bigger corpus of texts which were permitted to circulate by the French authorities. Royal Censorship has something to say about the subtleties and difficulties of controlling the printed word which resonates beyond the French context, and this edition will allow these ideas to be transmitted to a wider audience of scholars and students."

"As Raymond Birn's revealing case studies show, the weakening of censorship enforcement is reflected in the behaviour of the censors themselves and the increasingly sympathetic stance of the Direction de la librairie . . . Propelled by circumstances they could not control, the censors turned into effective agents of Enlightenment. Birn is not the first to point out the paradox, but his new book . . . is a well-stated reinforcement of the case."

"Birn's study presents an alternative view of royal censorship in eighteenth-century France, one based on extensive and thoughtful study of primary source materials. As such, it will prove a valuable resource for any who are interested in book publishing and censorship under the absolute monarchy"

"Birn's effectively argued central thesis is that royal censors were far more conscientious, circumspect, and inclined toward indulgence than the travails of Diderot, Voltaire, and other literary celebrities might lead one to suppose. . . The abundant questions left hanging attest both to the richness of Birn's subject and to the tantalizing nature of his compact overview."

"[A] welcome study . . . The reality of censorship was thus far more complex and nuanced than has often been supposed, and this study, which makes excellent use of the censors' original reports in the Bibliothèque nationale de France archives, is useful in correcting a number of misconceptions."

"Birn's new study is an invaluable contribution to [his] impressive corpus. It offers richly documented insight into the complex mental world of Enlightenment-era censors, along with a compelling account of how the government managed their work, and in the effort, ended up encapsulating so many of the key paradoxes of modernization in the eighteenth century." 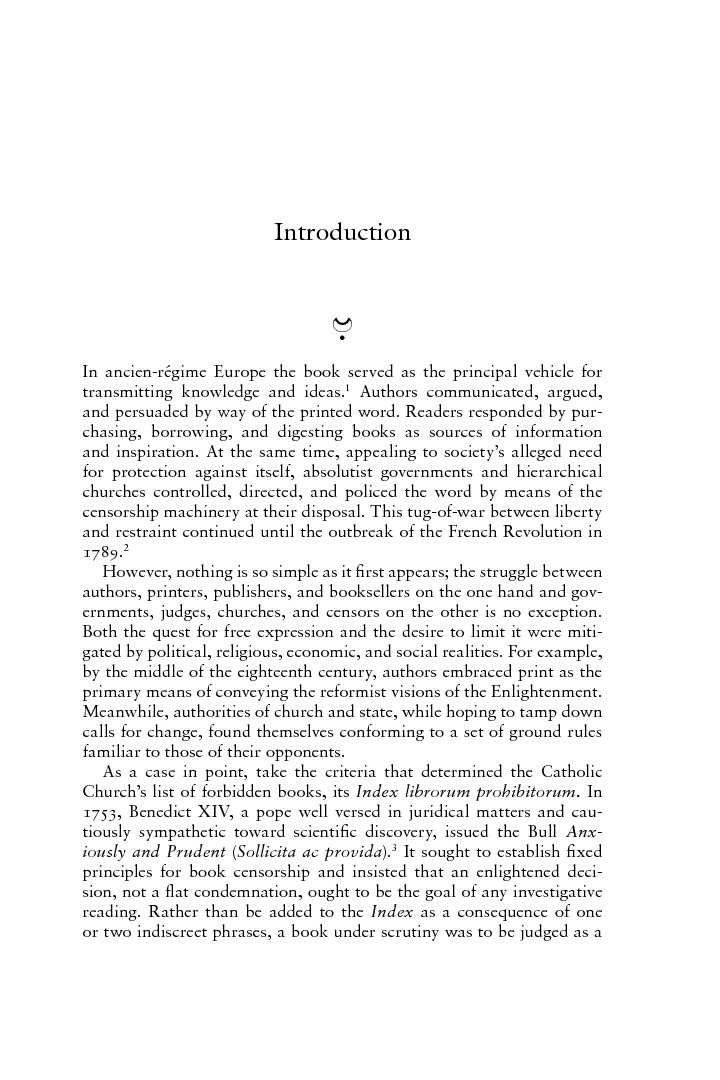 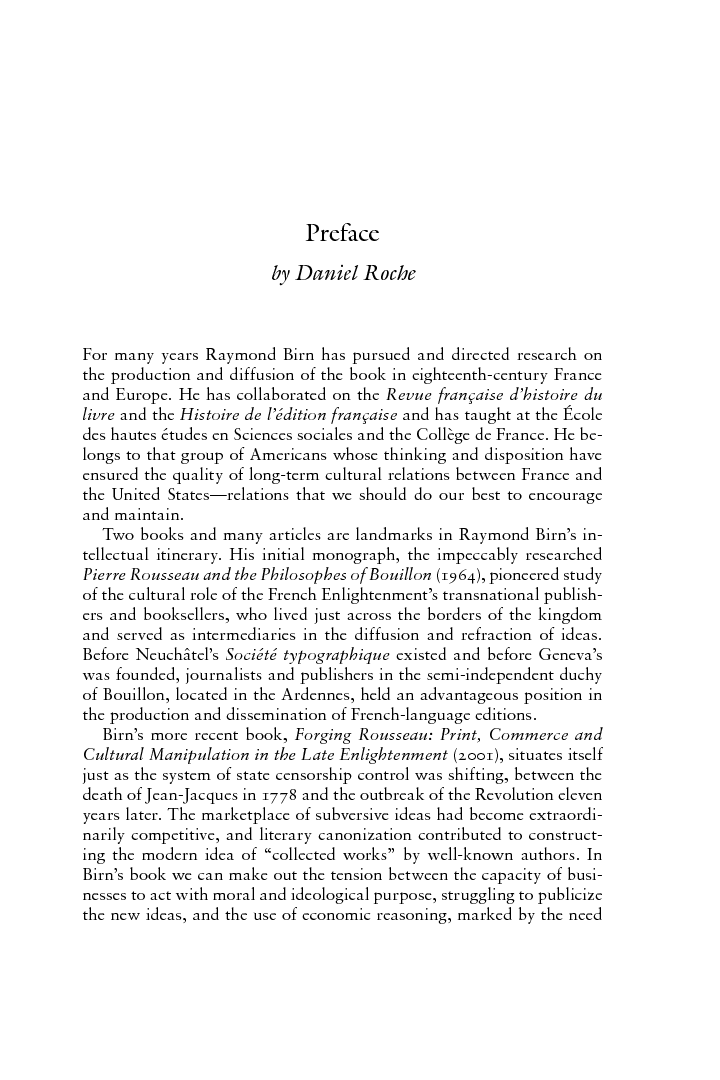 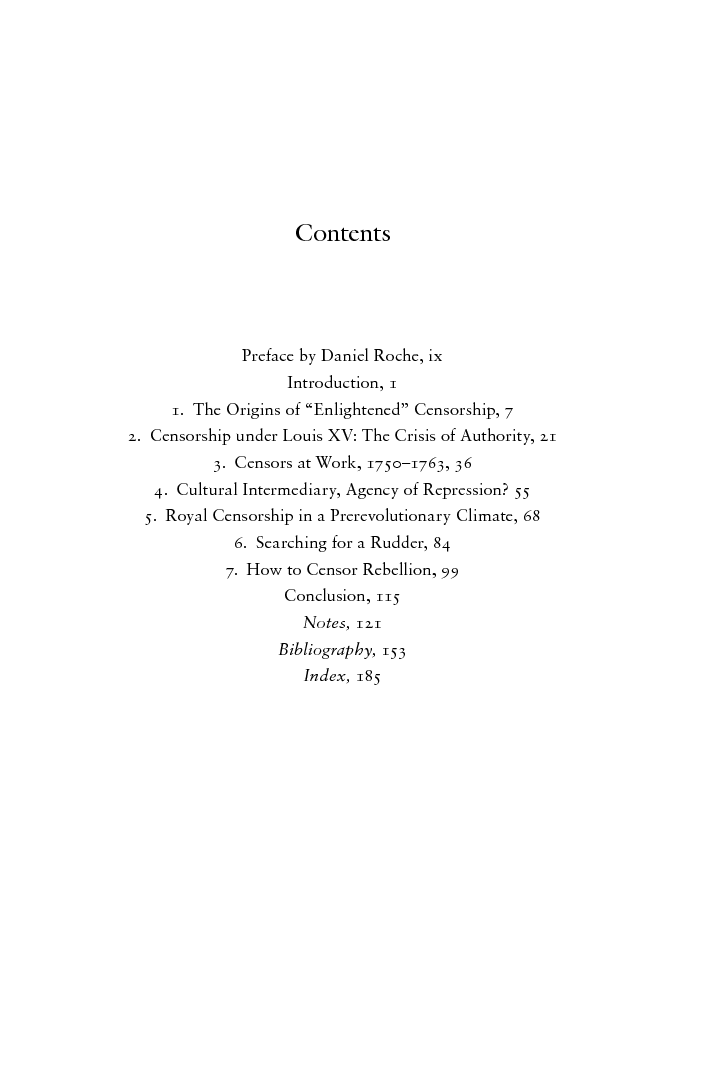