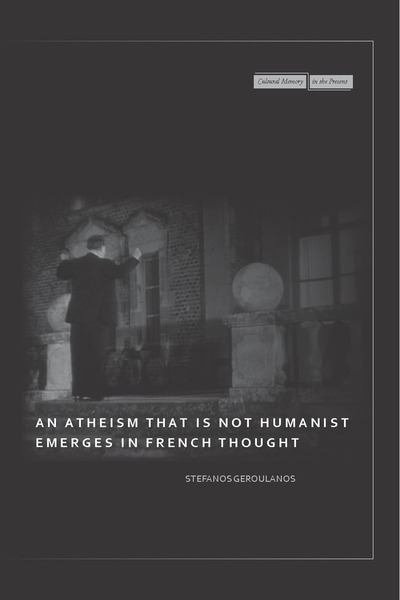 An Atheism that Is Not Humanist Emerges in French Thought
Stefanos Geroulanos
SERIES: Cultural Memory in the Present

French philosophy changed dramatically in the second quarter of the twentieth century. In the wake of World War I and, later, the Nazi and Soviet disasters, major philosophers such as Kojève, Levinas, Heidegger, Koyré, Sartre, Merleau-Ponty, and Hyppolite argued that man could no longer fill the void left by the "death of God" without also calling up the worst in human history and denigrating the dignity of the human subject. In response, they contributed to a new belief that man should no longer be viewed as the basis for existence, thought, and ethics; rather, human nature became dependent on other concepts and structures, including Being, language, thought, and culture. This argument, which was to be paramount for existentialism and structuralism, came to dominate postwar thought. This intellectual history of these developments argues that at their heart lay a new atheism that rejected humanism as insufficient and ultimately violent.

"An Atheism That is Not Humanist Emerges in French Thought examines a complex series of debates in mid-twentieth century French philosophy that culminates in the rise of antihumanism during the 1960s. The book is a rich and sophisticated intellectual history, offering food for thought for the specialist and non-specialist alike. . . Geroulanos argues convincingly that French antihumanism is rooted in the historical onset of this crisis during the pre-war period, in what separates the twentieth century from the nineteenth, and that an archaeology of antihumanism is utterly necessary if we wish to understand the present age."

"Focusing on a narrow period, roughly 1930 to 1954, and proceeding as an investigation into the emergence of antihumanism as a cultural figure in the overlapping spheres of philosophy, literature, theology, and politics, the book augurs a sea change in our historical approach to French intellectual currents . . . Geroulanos has irrevocably upended the conventional genealogy of the field."

"[T]he approach Geroulanos takes—putting atheism at the center of things—leads to insights . . . Geroulanos pays subtle respect to a range of intellectual positions and demonstrates the extreme complexity of the conversations, and the fierce disappointment that animated them."

"This book introduces a terrifically learned new intellectual historian who has provided a strikingly novel and philosophically interesting genealogy of the antihumanism that most observers associate with too recent an era of thought. Of interest to anyone concerned with the the rich traditions of Continental philosophy, Stefanos Geroulanos's investigation gives the French scene in the 1930s its due, with neglected figures, new departures, and influential breakthroughs that still challenge the temptation to make the humanity of man the basis of reflection."

"All too frequently anti-humanism serves as a mere slogan or a term of abuse. This broad-ranging and original new study of the anti-humanist movement in twentieth-century French thought helps us to comprehend the deeper complexities of this theme across numerous domains--philosophical, literary, religious, and political. Resisting facile judgment and alive to paradox, Geroulanos's book unsettles, reframes, and provokes at every turn. A work of true consequence by a compelling new voice in European intellectual history."

"The tradition of humanism, so long an affront to religious faith, has more recently been challenged from non-religious perspectives, perhaps nowhere as fiercely as in 20th-century France. With incisive readings of many of the masters of French thought, Stefanos Geroulanos unearths the tangled roots of post-structuralist anti-humanism, and in so doing, raises fundamental questions about what it means to be human in the 21st century."

"Beyond recasting the work of the best known thinkers of the mid-century, Geroulanos also highlights the significance of lesser-known figures, from the philosophy of science to theology. In incorporating these voices, he is able to show that atheist antihumanism, far from being opposed to currents of either scientific or religious thinking, was, in fact, deeply indebted to them . . . [This book] asks questions about the writing of history anew. In the process, it posits new horizons for thinking about the interrelationship between secularity and religion at a moment when these are highly charged questions in French history and politics—as well as beyond them."

"Rarely do I learn more from a scholarly book than I have from Stefanos Geroulanos's An Atheism that Is Not Humanist Emerges in French Thought. Geroulanos's central thesis is compelling but simple . . . [W]e have here a 'last man,' heir to those 'negations' of the world named freedom, history, and individuality, whose historical realization reveals that humanness is ultimately based upon a relation to death. To the degree that this antihumanism continues to order thinkers like de Man, Derrida, and Foucault, it has also shaped many Anglophone intellectuals of my generation. Geroulanos tells a story that thus illuminates us too."

—Simon During, The Immanent Frame

"One of the things that intellectual historians show us, although often only implicitly, is the fluidity of the terms of debates that we take to be self-evident. In An Atheism that Is Not Humanist Emerges in French Thought, Stefanos Geroulanos shows us this fluidity by focusing on the French history of objections to (and reformulations of) humanist discourse from 1929 to 1952, a history that suggests that the rigidity of the categories of 'religion' and 'humanism' in Anglophone discourse is exceptional and unnecessary."

"Geroulanos's lucid, carefully written text fills in a void in the secondary literature on this incredibly fruitful and influential time in French thought . . . [T]he intellectual history Geroulanos traces demonstrates that the antihumanism developed in 1930s Paris should be seen as proto-poststructuralist thought. The negative anthropology, questioning of positive knowledge, and antifoundationalist epistemology of this period were later appropriated and transformed by figures such as Derrida, Foucault, and Deleuze . . . Geroulanos's text provides a pathway for understanding how and why theologians and atheist Continental philosophers have proved to be such strange and intimate bedfellows."

—Reviews in Religion and Theology

"An Atheism that Is Not Humanist Emerges in French Thought achieves a much-needed dialogue between intellectual history and the history of philosophy. Rather than reduce intellectual history to a history of intellectuals—their publications, academic standing, and milieux—Geroulanos preserves the substantive content and stakes of atheist anti-humanism across four decades of debate."

"Stefanos Geroulanos's valuable, sophisticated, and dense book recounts a crucial chapter in the twentieth-century undermining of the Western humanist tradition. Rewardingly focused on French intellectual life from the mid-1920s to the mid-1950s, this meticulously excavated study argues that, in the face of interwar distress, scientific and philosophical innovations, and a miscellany of competing versions of humanism, some prominent thinkers were drawn to variously phrased forms of antihumanist atheism. In addition to its stand-alone merits, this study offers an invaluable prehistory to a later, better-known, and more influential antihumanist wave among French intellectuals during the 1950s–1970s . . . [I]t is a worthwhile read and sure to be a compulsory reference in the field."

"[Geroulanos's] work offers an impressive narrative of the complex history of anti-humanism in twentieth-century French thought . . . . [T]he book is rich in historical detail, suggestive in its historical analysis, and provocative philosophically." 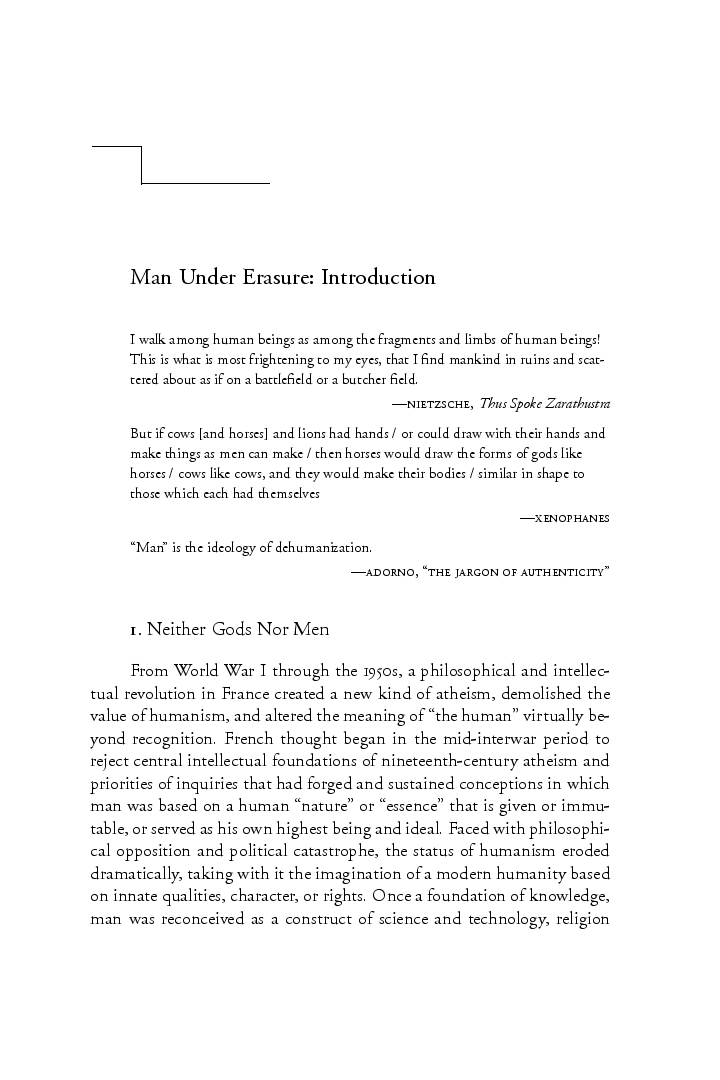 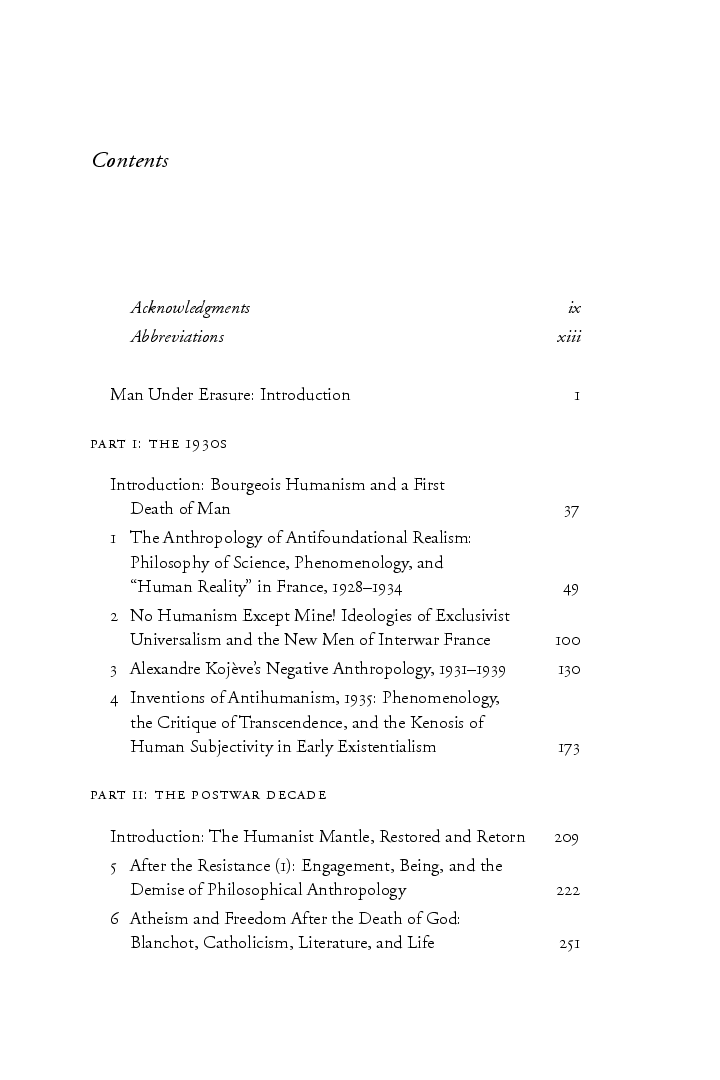