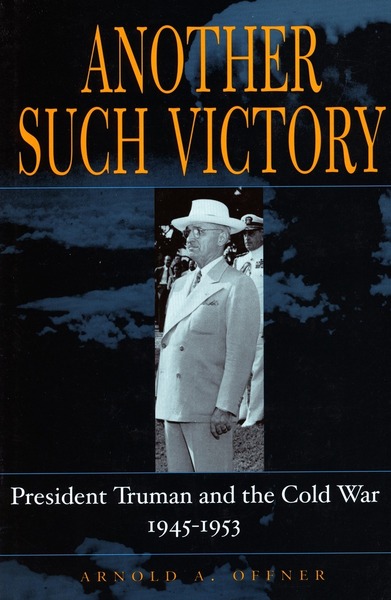 This book is a provocative, forcefully argued, and thoroughly documented reassessment of President Truman’s profound influence on U.S. foreign policy and the Cold War. The author contends that throughout his presidency, Truman remained a parochial nationalist who lacked the vision and leadership to move the United States away from conflict and toward détente. Instead, he promoted an ideology and politics of Cold War confrontation that set the pattern for successor administrations.

This study sharply challenges the prevailing view of historians who have uncritically praised Truman for repulsing the Soviet Union. Based on exhaustive research and including many documents that have come to light since the end of the Cold War, the book demonstrates how Truman’s simplistic analogies, exaggerated beliefs in U.S. supremacy, and limited grasp of world affairs exacerbated conflicts with the Soviet Union and the People’s Republic of China. For example, Truman’s decision at the Potsdam Conference to engage in “atomic poker” and outmaneuver the Soviets in Europe and Asia led him to brush aside all proposals to forgo the use of atomic bombs on Japan.

Truman’s insecurity also reinforced his penchant to view conflict in black-and-white terms, to categorize all nations as either free or totalitarian, to demonize his opponents, and to ignore the complexities of historic national conflicts. Truman was unable to view China’s civil war apart from the U.S.-Soviet Cold War. Belittling critics of his support for the corrupt Guomindang government, he refused to negotiate with the emergent PRC. Though he did preserve South Korea’s independence after North Korea’s attack, he blamed the conflict solely on Soviet-inspired aggression, instead of a bitter dispute between two rival regimes. Truman’s decision to send troops across the 38th parallel to destroy the North Korean regime, combined with his disdain for PRC security concerns, brought about a tragic wider war.

In sum, despite Truman’s claim to have “knocked the socks off the communists,” he left the White House with his presidency in tatters, military spending at a record high, McCarthyism rampant, and the United States on Cold War footing at home and abroad.

Arnold A. Offner is Cornelia F. Hugel Professor of History at Lafayette College. He is the author of American Appeasement: United States Foreign Policy and Germany, 1933-1938 and The Origins of the Second World War: American Foreign Policy and World Politics, 1917-1941, and co-editor of Victory in Europe, 1945: From World War to Cold War.

"This major book is a critical revisionist portrait of Truman's personal role in shaping U.S. foreign policy toward the Soviet Union and the People's Republic of China. . . . The importance of the scholarship, the author's careful voice of reasonable criticism, the lucid writing style—all should give the book a popular readership that reaches beyond the university and foreign policy publics."

"At a moment in the early 2lst century when the choices in a new crisis seem simply black and white, this is precisely the kind of historical perspective we should have. Professor Offner has reopened a long overdue debate on Harry Truman—both on the man and his role in the origins of the Cold War. . . . [I]t certainly demands to be read and widely discussed."

—Walter LaFeber, Cornell University and author of America, Russia and the Cold War

"In this cogently argued and meticulously documented study, Arnold Offner challenges popular attitudes about Harry Truman's leadership. Another Such Victory presents a powerful indictment of a president whose inexperience, provincialism, and uncritical acceptance of the superiority of American values and interests led to needlessly provocative policies that exacerbated international tensions at a crucial juncture in modern world history. . . . [O]ne of the most important books about the early Cold War to appear in the past decade."

"Offner has written a provocative, critical analysis of Harry S Truman, now the most acclaimed president of the Cold War era. Everyone who has read McCullough on Truman will want to read Offner and reexamine previous conclusions. If you are interested in executive decision-making in times of international crisis, this is a book worth reading and pondering."

"This important contribution to Truman biography and Cold War history runs against the grain of much recent scholarship. It is certain to generate controversy and open up debate."

"This excellent revisionist account updates Daniel Yergin's seminal Shattered Peace: The Origins of the Cold War and the National Security State and is enthusiastically recommended for academic diplomatic history collections."

"One wonders what the fiesty president would say if he were around to rebut such charges and whether it would be printable."

"No recent book has stirred up the world of Truman devotees and cold war scholars quite like Arnold A. Offner's [Another Such Victory]."

"Offner's well-written, thoroughly documented, and provocative book underlines the importance of presidential leadership and reopens questions about whether Truman's 'near-great' stature is deserved."

"Prof. Arnold A. Offner of Lafayette College has produced a work of stupendous research, which demolishes the Truman myth completely."

"This book is one of the most important to appear in recent years on the early Cold War and opens up a badly needed debate over Truman's foreign policies. Another Such Victory should enjoy wide readership. Whether or not the thesis is accepted, it should force a reexamination of the popular myth that Truman was the confident president who preserved American national interests and the 'free world' from unwarranted encroachments by the 'evil empire.'"