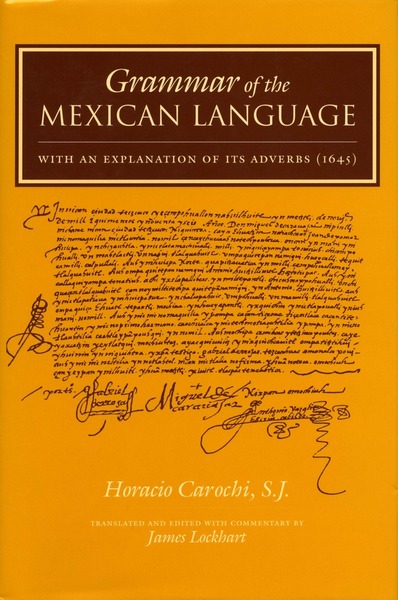 Grammar of the Mexican Language
With an Explanation of its Adverbs (1645)
Horacio Carochi, S.J. Translated and Edited with Commentary by James Lockhart

The primary native language of central Mexico before and after the Spanish conquest, Nahuatl was used from the mid-sixteenth century forward in an astounding array of alphabetic written documents. James Lockhart, an eminent historian of early Latin America, is the leading interpreter of Nahuatl texts. One of his main tools of instruction has been Horacio Carochi's monumental 1645 Arte de la lengua mexicana, the most influential work ever published on Nahuatl grammar. This new edition includes the original Spanish and an English translation on facing pages. The corpus of examples, source of much of our knowledge about vowel quality and glottal stop in Nahuatl, is presented once in its original form, once in a rationalized manner. Copious footnotes provide explanatory commentary and more literal translations of some of Carochi's examples. The volume is an indispensable pedagogical tool and the first critical edition of the premier monument of Nahuatl grammatical literature.

James Lockhart is Professor Emeritus of History at UCLA. Many would regard him as the leading historian writing today on Colonial Latin America, having pioneered the detailed use of indigenous-language sources (notably Nahuatl) to carry out this work. His books include Nahuas and Spaniards: Post Conquest Central Mexican History and Philology (Stanford University Press, 1991), The Nahuas After the Conquest: A Social and Cultural History of the Indians of Central Mexico, Sixteenth Through Eighteenth Centuries (Stanford University Press, 1992), and Of Things of the Indies: Essays Old and New in Early Latin American History (Stanford University Press, 2000). The second title mentioned above won the Beveridge Prize, the Bolton Prize, the Cline Prize, and the Wheeler-Voegelin Prize.

"James Lockhart, an eminent historian of early Latin America, is the leading interpreter of Nahuatl texts and has trained many students in older Nahuatl. One of his main tools of instruction has been Horacio Carochi's monumental 1645 Arte de la lengua mexicana, the most influential work every published on Nahuatl grammar. The best recent grammars of Nahuatl have been based on that of Carochi, but they have not exhausted what remains an important reference work in its own right. . . . The volume is at once an indispensable pedagogical tool and the first critical edition of the premier monument of Nahuatl grammatical literature."

"[Grammar of the Mexican Language and Nahuatl as Written] are important additions to our repertoire of materials on Nahuatl. The Carochi grammar is a work of transcendent importance. The translation and editing by Lockhart are a significant contribution."

"If other usable texts exist that students and interested scholars can use to undertake study of this challenging language, Carochi's text, in combination with Lockhart's workbook, ranks among the most accessible and useful, especially for those working without the benefit of a linguist to explain intricacies of vowel length, verb tenses, and the complex matters of word formation and order."