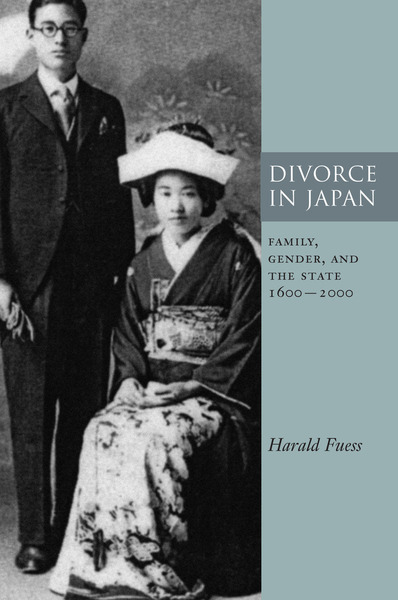 Historians have paid little attention to divorce in Japan, even though until the mid-twentieth century Japan had one of the highest divorce rates in the world. This book shows that the high prevalence of divorce was made possible by a regulatory framework condoning consensual divorce. Spouses and their families were usually free to negotiate dissolution with little interference from public authorities. Only in the rare cases of intractable conflict did parties seek legal adjudication, a situation that holds true to this day.

Despite the institutional and ideological continuities over four centuries, the perception and practice of divorce have been transformed in adapting to new social roles for men and women, changing views of marriage and parenting, and changes in intergenerational relations. Married couples across all social groups have more control over initiating and terminating their marriage than ever before. Wives now have the same legal rights to sue for divorce as their husbands. The author shows, however, that not all changes have been to the women's advantage, nor were traditional practices as detrimental to women as is often assumed.

Harald Fuess is a Director and Executive Board Member of the White Rose East Asia Centre and the National Institute of Japanese Studies at the Universities of Sheffield and Leeds. He obtained his PhD at Harvard

University and lived in Japan for 15 years.

"...This book is a must-read for social scientists with research interests in the areas of gender, marriage and the family, and demography."

"In providing a detailed analysis of the gender dynamics of marriage, moreover, [Fuess] illuminates the shifting position of women within the family and marriage, pertinent to many discussions of contemporary Japanese society."

"[This book] is a rich resource that will provide the starting point for much new research and will be widely cited by anyone writing on divorce and marriage in Japan."

"In Divorce in Japan: Family, Gender, and the State, 1600-2000, Harald Fuess presents a careful and very accessible description of the social and political context of Japan's historically very high rates of divorce, their subsequent decline to very low levels, and their recent return to levels on par with most other industrialized societies. This book is a welcome addition to the very limited English-language literature on divorce in Japan....the central themes in this historical overview of divorce in Japan should be of broad interest to all sociologists."

"This fine interdisciplinary treatment of divorce should be useful to those in family studies, comparative social sciences, and institutional and legal historians, in addition to the obvious contribution it makes to Japanese area studies, for undergraduate and graduate courses alike."

"Divorce in Japan is an invaluable contribution to scholarship on Japan, not just for what it reveals about divorce, marriage, and family, but for the comprehensive use of materials and its theoretical underpinnings. Fuess is to be commended for his meticulous methods of interpretation and his expression of compelling findings in a clear, unequivocal prose style."