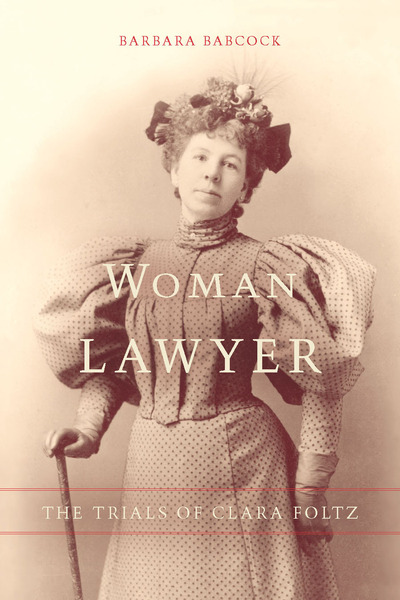 Woman Lawyer tells the story of Clara Foltz, the first woman admitted to the California Bar. Famous in her time as a public intellectual, leader of the women's movement, and legal reformer, Foltz faced terrific prejudice and well-organized opposition to women lawyers as she tried cases in front of all-male juries, raised five children as a single mother, and stumped for political candidates. She was the first to propose the creation of a public defender to balance the public prosecutor. Woman Lawyer uncovers the legal reforms and societal contributions of a woman celebrated in her day, but lost to history until now. It casts new light on the turbulent history and politics of California in a period of phenomenal growth and highlights the interconnection of the suffragists and other movements for civil rights and legal reforms.

Barbara Babcock, Judge John Crown Professor of Law, Emerita, at Stanford University, is the first woman appointed to the regular faculty at Stanford Law School. She served as an Assistant Attorney General and was the first Director of the Public Defender Service in Washington, D.C.

"By rescuing Clara Foltz's story from relative obscurity, Babcock has provided a powerful reminder of women's strength in the face of adversity, their will to overcome difficulties, and, together with sympathique brothers-in-law, to work toward a system of justice accessible and fair to all. Women Lawyer should engage feminists of my era and my children's generation, and history buffs of any age; most of all, the book should amaze and inspire young women and public defenders just embarking on their lives in the law."

"Stanford Law professor Barbara Babcock enriches our knowledge of women and the law in California history with this single volume, Woman Lawyer: The Trials of Clara Foltz. . . Chapters devoted to her writings in law reviews and model statutes investigate and reveal Foltz's thinking and her impact on public life. . . [R]eaders will find in them extensive detail and compelling analysis."

"For Barbara Babcock, a distinguished legal historian who is herself a feminist pioneer . . . this book is clearly a labor of love, but also of identification. Babcock recognizes that the women we write about are not always model heroines; they have flaws, make mistakes, and choose differently from what we might have chosen. She tells Foltz's tale with commendable dispassion, never too close to her subject nor too critical, yet with her own perspective 'as a trial lawyer, a public defender, a first woman, and a feminist' shaping the account in both the selection and treatment of her material."

"Babcock is at her best in Woman Lawyer . . . giving just enough information to whet the appetite."

"The book is rich in history, and as entertaining and lively as its subject."

"Barbara Babcock is one of our leading legal historians. Woman Lawyer gives voice to Clara Foltz's long and fascinating life, making vivid her important contributions as a reformer, 'first' woman lawyer, and legal thinker. It will establish itself as a classic in legal studies, women's studies, and American biography."

"Beautifully written and meticulously researched, Woman Lawyer provides a riveting portrait of a remarkable woman and her journey as a mother of five to becoming one of the first women lawyers in United States. Yet even more memorable is this book's evocation of another frontier: California on the brink of its modern identity, forged in the middle of an economic challenge and intense racial and class conflict. Unflinching in its assessment of the temptations of demagoguery to the pioneering Clara Foltz, Barbara Babcock has produced a compelling book of enormous and enduring insight into how even gifted and visionary individuals navigate, shape, and reflect political and social contests."

"Barbara Babcock's wonderful book only reinforces my view that being a public defender has been the most rewarding part of my professional career. Clara Foltz is my hero, and this book chronicles the challenges and achievements of perhaps the greatest public defender ever."

"In her engrossing new book, Woman Lawyer: The Trials of Clara Foltz, Barbara Babcock acknowledges that, for her, full detachment from her courageous, charismatic subject—California's first woman lawyer—is not possible. In fact, full detachment from Clara Foltz is not possible for any of her 'daughters in the law,' and beyond the law. Foltz's struggles to gain a foothold in several all-male worlds, powerfully told, connect to so many of us, across the nation and across the centuries."

"Barbara Babcock conjures and brings to life a nearly-forgotten feminist hero. This account of Clara Foltz's rise from an under-educated farmer's wife to an icon of the California women's movement and a national public intellectual is both riveting and strangely familiar. That a single mother of five could have exploded into the hurly-burly world of California in the 1870s and—through mastery of the media, manipulation of her public image, and dogged hard work—become a national force for early progressive jurisprudence is astonishing. That women in 2011 could have no collective memory of Foltz is tragic. Babcock brings Foltz back to us with great tenderness and subtlety, reclaiming a place in American legal history for a working mother and national thinker who has much to teach us still." 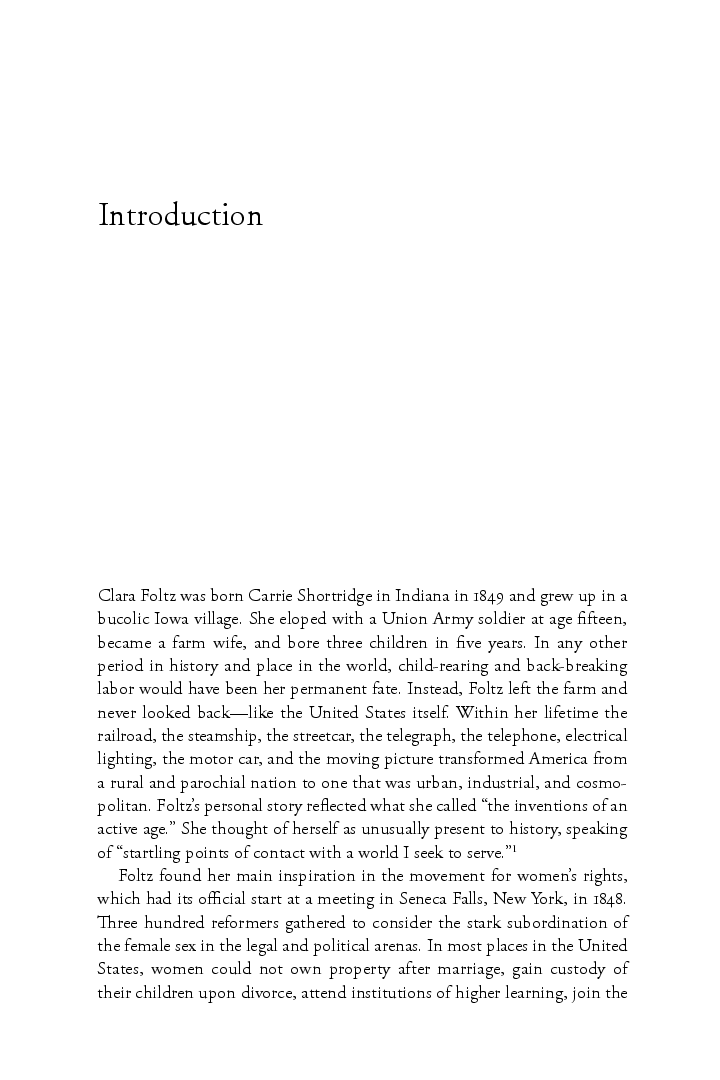 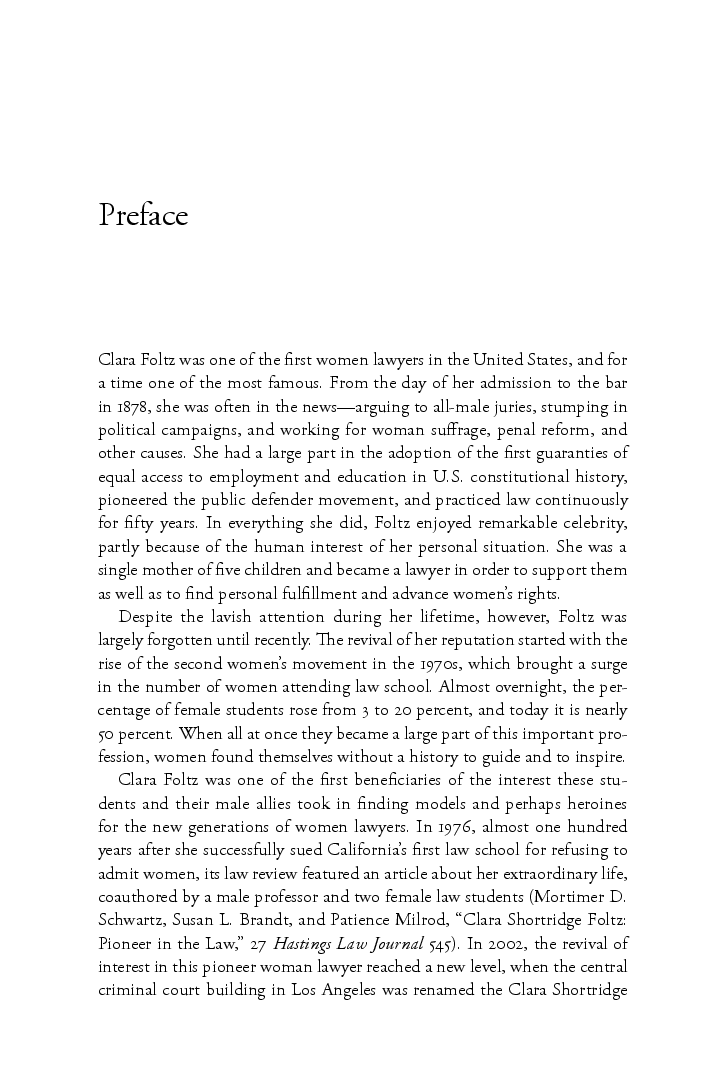 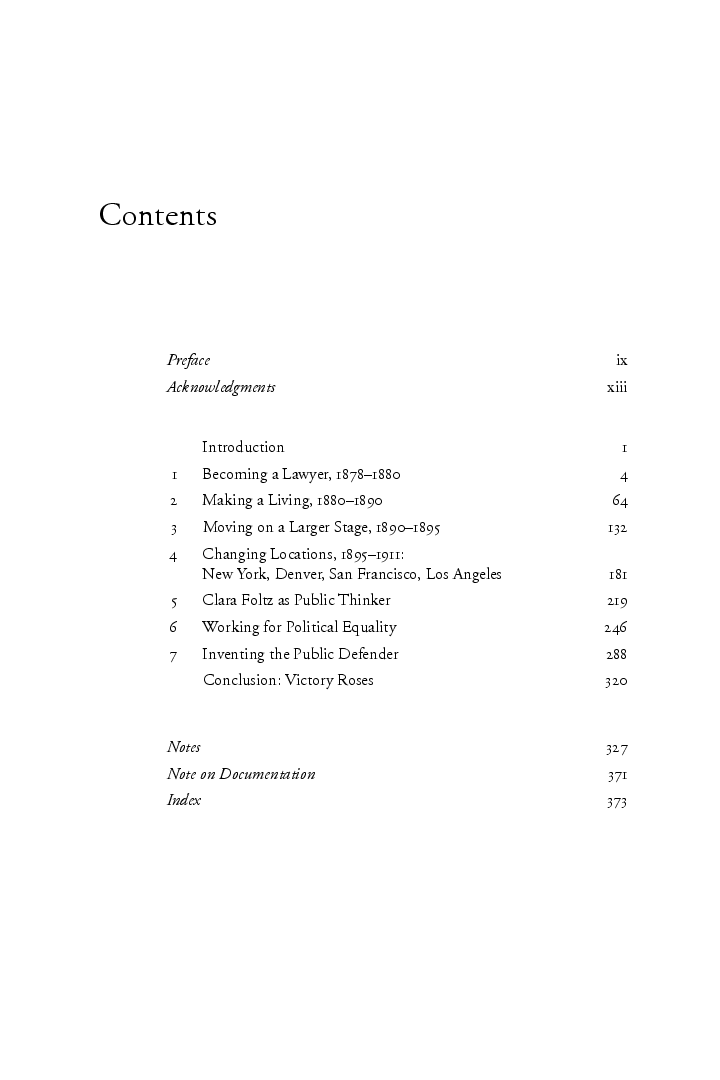