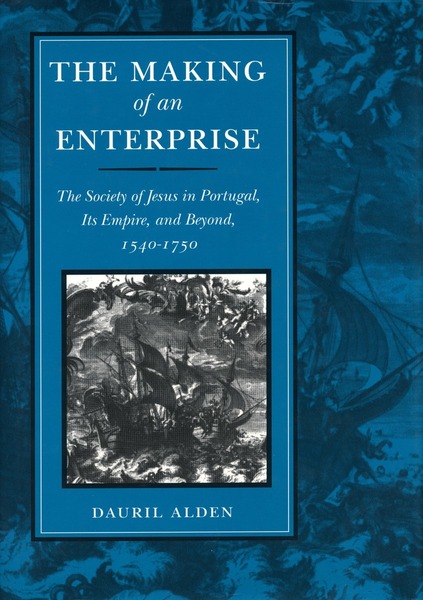 The Making of an Enterprise
The Society of Jesus in Portugal, Its Empire, and Beyond, 1540-1750
Dauril Alden

Based on more than two decades of research conducted on five continents, this monumental work focuses on the activities of members of the Society of Jesus from its foundation to the eve of its expulsion from the Portuguese world. A second volume will examine the Order’s expulsion, the fate of its members, and the disposition of its assets in Portugal and her empire from 1750 to 1808.

The present volume begins with the Society’s introduction to Portugal and traces its expansion throughout what the Society defined as the Portuguese Assistancy, a vast complex of administrative units that included the kingdom of Portugal and her empire plus portions of the Indian subcontinent, Japan, China, the Indonesian archipelago, and Ethiopia. Though it fully describes the evangelical and educational activities of the Jesuits, the book emphasizes their political relations with Portuguese and indigenous leaders, the founding of their major training facilities, the development of their economic infrastructure, their activities as governmental administrators for the Portuguese in India and China, and their role in Portugal’s unsuccessful attempts to preserve her eastern empire and to revive Brazil after the Dutch occupation (1630-1654). Throughout, the author makes insightful comparisons between the Jesuits and their peers in various parts of the Portuguese Assistancy and between the Jesuits and their monastic predecessors in various parts of Europe, notably France and England.

Dauril Alden is Professor of History and Latin American Studies at the University of Washington. He is the author of Royal Government in Colonial Brazil.

“This book represents a milestone, both in church and European expansion history. Nothing in print is as broad, inclusive, and probing as this study. It not only summarizes and integrates all previous scholarship, but it adduces and combines with the older studies a huge amount of original archival research. . . . This is the best in-depth study of any religious order.”—George D. Winius, University of Leiden

“This meticulously researched and clearly written tome is destined to be a frequently consulted classic on the shelves of historians of Portugal, Brazil, India, and the Society of Jesuits. Dauril Alden...paints a highly readable, informative, and detailed history of the Jesuits, the premier missionary order of the Portuguese Crown.”—Alida C. Metcalf, Trinity University