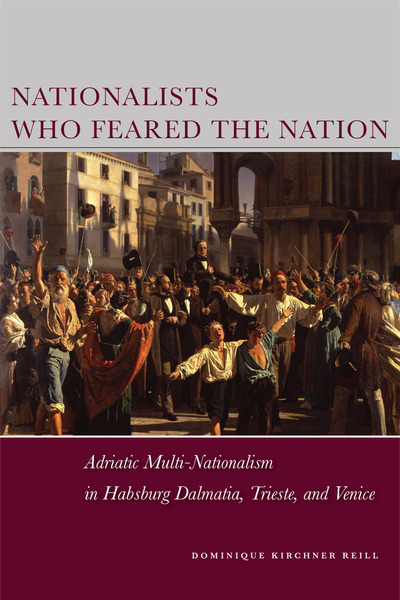 We can often learn as much from political movements that failed as from those that achieved their goals. Nationalists Who Feared the Nation looks at one such frustrated movement: a group of community leaders and writers in Venice, Trieste, and Dalmatia during the 1830s, 40s, and 50s who proposed the creation of a multinational zone surrounding the Adriatic Sea. At the time, the lands of the Adriatic formed a maritime community whose people spoke different languages and practiced different faiths but identified themselves as belonging to a single region of the Hapsburg Empire. While these activists hoped that nationhood could be used to strengthen cultural bonds, they also feared nationalism's homogenizing effects and its potential for violence. This book demonstrates that not all nationalisms attempted to create homogeneous, single-language, -religion, or -ethnicity nations. Moreover, in treating the Adriatic lands as one unit, this book serves as a correction to "national" histories that impose our modern view of nationhood on what was a multinational region.

Dominique Kirchner Reill is Associate Professor of Modern European History at the University of Miami.

"Bridging the two shores of the Adriatic, [Reill's] study establishes a comparative framework within which she relentlessly questions what the nation meant to nationalist thinkers in these years, how and why those ideas differed, and how and why they evolved. This beautifully written and deeply researched study broadens our understanding of the Risorgimento and offers an essential point of reference for anyone interested in the diversity of European nationalism and nationalist thought in the first half of the nineteenth century."

"Through the analysis of an impressive array of sources, Reill deftly demonstrates the fluidity of nationalist ideas and the limitations of concentrating on aspects of the development of the 'one nation, one state' model that emerged as predominant in the latter half of the nineteenth century . . . Reill's greatest contribution lies in her ability to uncover the lost voices of the nineteenth-century Adriatic."

"Reill's impressive first book exemplifies the best of the historian's craft. As she diligently scours still neglected regional archives throughout the northern Adriatic, the book interweaves jewels of insight into a finely crafted narrative about the intellectual journeys of six natives of the northern Adriatic. By tenderly easing her insights gained from inspecting private correspondences, newspaper articles, and an occasional government document into a lucidly presented story, this complex book is as much engaging as revelatory. In this respect, I found myself thoroughly drawn to this study meshed together by a talented historian who uses disparate sources to make compelling arguments about an often-neglected part of the Habsburg Empire. . . . Reill is an excellent scholar whose work is both invigorating and original. I, for one, cannot wait for her next book."

"In Nationalists Who Feared the Nation, Dominique Kirchner Reill seeks to 'recover the forgotten realities and lost possibilities of nationalism' by questioning the commonly held scholarly understanding of nationalism as a concept intended to enforce homogeneity and eliminate, through a variety of means, diversity . . . [Reill's] book has recovered the lost voices of Adriatic multi-nationalists who proposed alternative and less violent paths towards nationhood, thus rescuing them from the embrace of oversimplified nationalist narratives in which they figure as some of the first fighters for mono-national causes."

"Dominique Kirchner Reill has written a well-researched book. . . [W]ell worth reading for its lively study of interesting personalities and situations, attractively evoked."

"The recent publication of Dominique Reill's monograph on Adriatic nationalism has served to complicate still further our understanding of the cultural definition of the nation in the Risorgimento. In this tightly focused and elegantly written book Reill discusses the concept of nation developed by a group of Dalmatian intellectuals, whose acknowledged leader and source of inspiration was the famous Niccolo Tommaseo."

"Set against the backdrop of 19th-century nationalism, this insightful and deeply researched study examines the careers and programs of six largely forgotten individuals who sought multinational solutions for the areas of Venice, Trieste, and Habsburg Dalmatia. . . . Highly Recommended."

"Dominique Reill presents an extremely sophisticated and subtle theoretical argument about the relationship between nationalism and pluralism, and does so in a way that is both novel and clear. One need not be independently interested in the Adriatic (as I, admittedly, happen to be) in order to recognize the importance of this manuscript's contribution to the study of nationalism."

"Tightly analyzed, engagingly written, based on a wealth of primary and secondary sources, and path-breaking in its unique perspective on nationalist movements in the first half of the 19th century."

"This lucid book offers readers a topic that has not emerged so far in historiography. The author dedicates special attention to going beyond the common clichés and usual, stereotyped mental patterns that are often present not only in individual national and nationalist narration, but also in historiographical production. By explaining Adriatic multinationalism, Reill's book has, as any good hisotriographical work does, opened new questions."

"Reill has created a thought-provoking work that sheds light on a corner of Europe that deserves more scholarly attention." 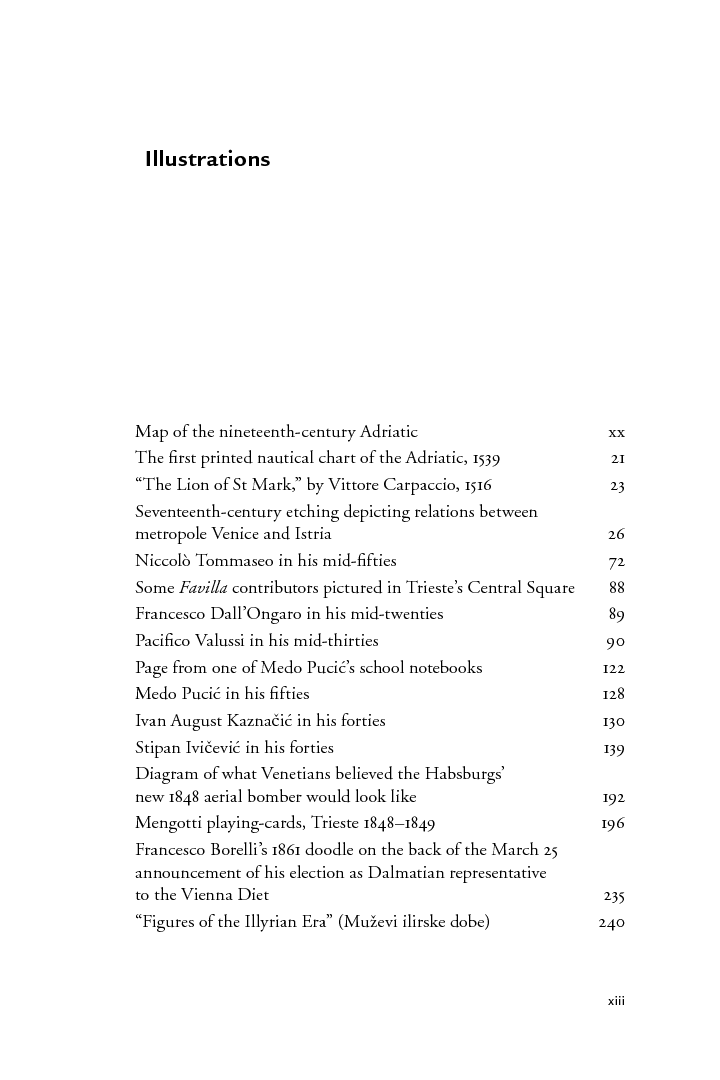 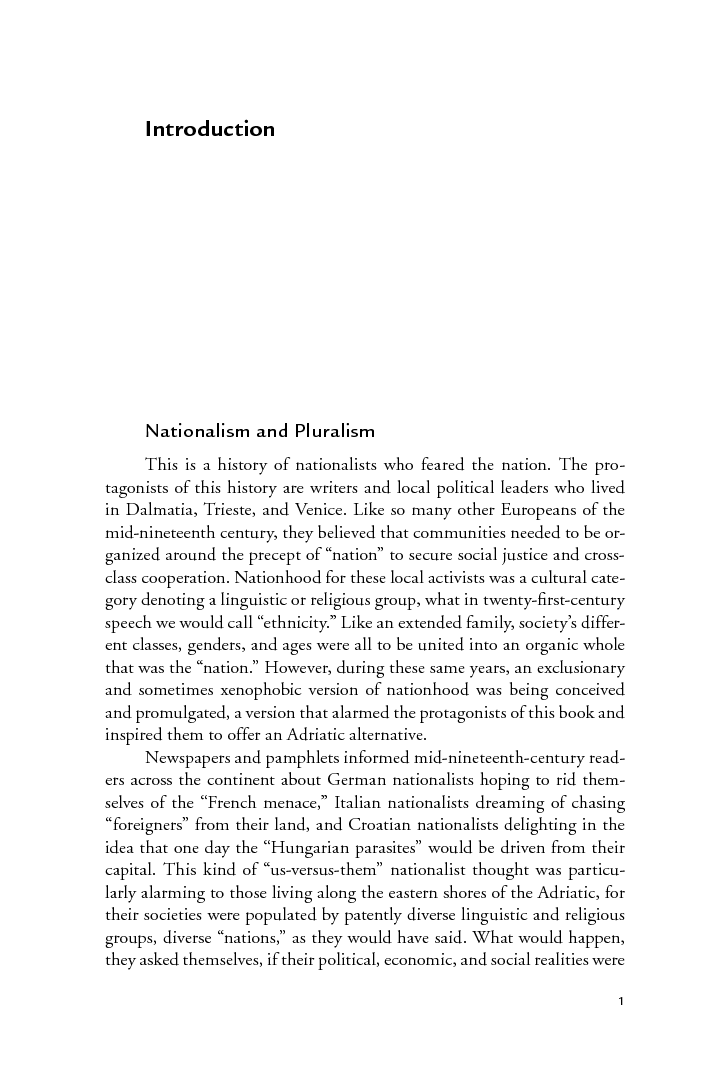 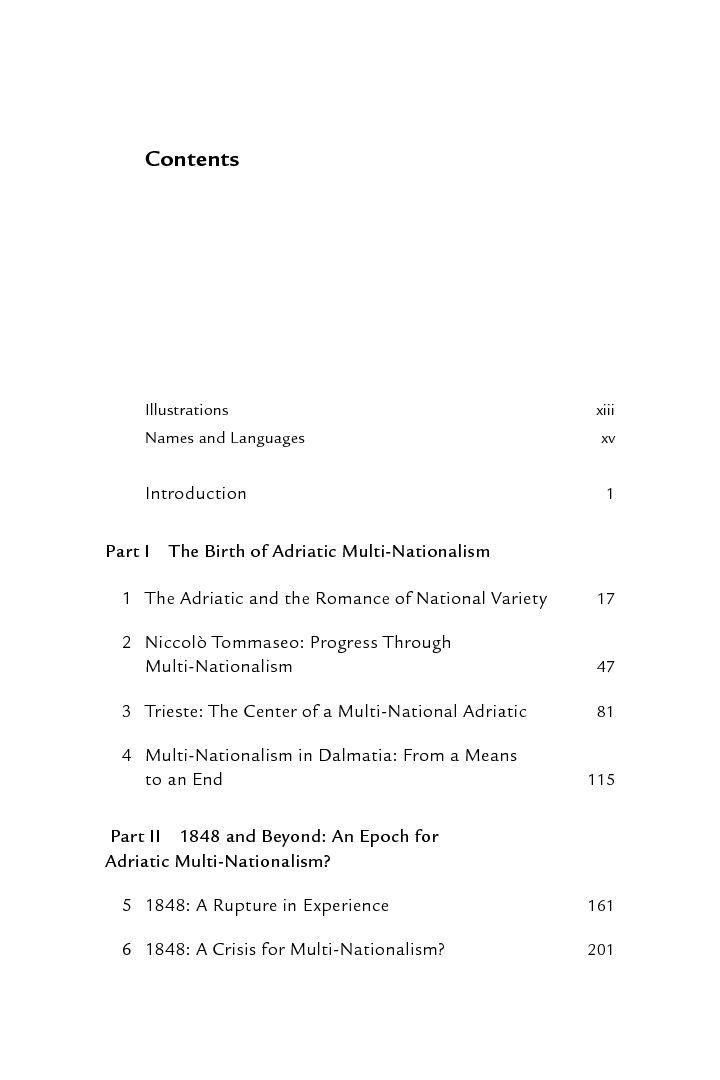