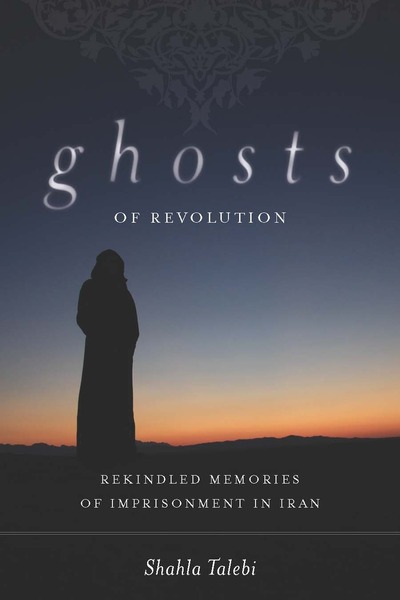 Honorable Mention, for Biography & Autobiography, in the 2011 PROSE Awards (PSP Awards for Excellence), sponsored by the Professional and Scholarly Publishing Division, Association of American Publishers.

"Opening the enormous metal gate, the guard suddenly took away my blindfold and asked me, tauntingly, if I would recognize my parents. With my eyes hurting from the strange light and anger in my voice, I assured him that I would. Suddenly I was pushed through the gate and the door was slammed behind me. After more than eight years, here I was, finally, out of jail . . . ."

In this haunting account, Shahla Talebi remembers her years as a political prisoner in Iran. Talebi, along with her husband, was imprisoned for nearly a decade and tortured, first under the Shah and later by the Islamic Republic. Writing about her own suffering and survival and sharing the stories of her fellow inmates, she details the painful reality of prison life and offers an intimate look at a critical period of social and political transformation in Iran.

Somehow through it all—through resistance and resolute hope, passion and creativity—Talebi shows how one survives. Reflecting now on experiences past, she stays true to her memories, honoring the love of her husband and friends lost in these events, to relate how people can hold to moments of love, resilience, and friendship over the dark forces of torture, violence, and hatred.

At once deeply personal yet clearly political, part memoir and part meditation, this work brings to heartbreaking clarity how deeply rooted torture and violence can be in our society. More than a passing judgment of guilt on a monolithic "Islamic State," Talebi's writing asks us to reconsider our own responses to both contemporary debates of interrogation techniques and government responsibility and, more simply, to basic acts of cruelty in daily life. She offers a lasting call to us all.

"The art of living in prison becomes possible through imagining life in the very presence of death and observing death in the very existence of life. It is living life so vitally and so fully that you are willing, if necessary, to let that very life go, as one would shed chains on the legs. It is embracing, and flying on the wings of death as though it is the bird of freedom."

Shahla Talebi was imprisoned in Iran from 1977 to 1978 and again from 1983 to 1992, first by the former Shah and later by the Islamic Republic, for her political beliefs and activities. She now lives in the United States and is Assistant Professor of Religious Studies at Arizona State University.

"This is a powerful book that significantly enriches readers' understanding of human resiliency under regimes of torture and stands as compassionate testimony to the dialectical relationship between repression and resistance in modern Iran. Highly recommended."

"Not memoir nor autobiography, but an extraordinary beading of visions beyond the person, and even the specific history of Iran, this book casts new eyes on the deathly zones of the post-revolutionary years without ever emptying the Revolution of its spiritual-political hope. In parsimony of words the author's voice is woven in conversation with the dead, as a gesture of love. It bears witness to death, madness, and betrayal for the sake of the living, and of community, mindful at all moments that the risk of destruction and madness is as much the product of historical processes as it is nested in the human soul. Act of witnessing and work of literature, Ghosts of Revolution makes an important impact for the transformation of cultural memory. It is a work of art in the fullest sense: a creation at the limits of life."

—Stefania Pandolfo, University of California, Berkeley, author of Impasse of the Angels. Scenes from a Moroccan Space of Memory

"Shahla Talebi's observations about language, writing, death, modes of consciousness, the depravity of the state and its prisons, and the experience of love and solidarity in the most abject circumstances in which she found herself speak for themselves. Her portraits of fellow prisoners are unforgettable. By far the most moving, sensitive, and profound book about torture I have read."

"Ghosts of Revolution gives us a great lesson in humanism in a period of History when we insist on the outer signs of international conflicts and lose sight of the inner struggles and sufferings of the people, each taken individually, who are the unbreakable core of what really matters. Shahla Talebi is a survivor with no hatred in her heart. We are implicated in what she has to say."

—Etel Adnan, author of Master of the Eclipse and Sitt Marie Rose

"This searing memoir of women's visceral pain, principled resilience, and redemptive imagination in Iran's brutal political prisons will leave you shaken, forever. Talebi's voice is remarkable for its generous empathy, its poetry in evoking the tortured humanity of the women with whom she shared her prison experience, and its brilliance in analyzing the dark horrors inflicted on the men and women condemned to these death-spaces that were, in the 1970s and 1980s, and are even today, so strangely tied to the exercise of power in Iran."

"Ghosts of Revolution is the forbidden and forgotten social history of Iran, the moral vindication of a people written from the vantage point of a political prisoner, from the bared life of a liberating conscience. Judiciously poetic, pulling no punches, but above all showing an abiding love for the people of a homeland that is now blessed to have her as its storyteller, Shahla Talebi reassures the world that the right and the beautiful are still triumphant."

"Ghosts of Revolution is both a powerful testimony and an important political act from an author sharing her singular experience of eight years behind prison bars. Remarkable in Talebi's memoir is her profound sense of dignity and resilience in the face of absolute despair and brutality. With a philosophical edge, her book helps us all to face our humanity and vulnerability and, most of all, to grasp that fine barrier between life and death, hope and submission. With clarity, honesty, and a lack of sentimentality, Ghosts of Revolution speaks to the resilient nature of the human spirit in the face of adversity and the abyss." 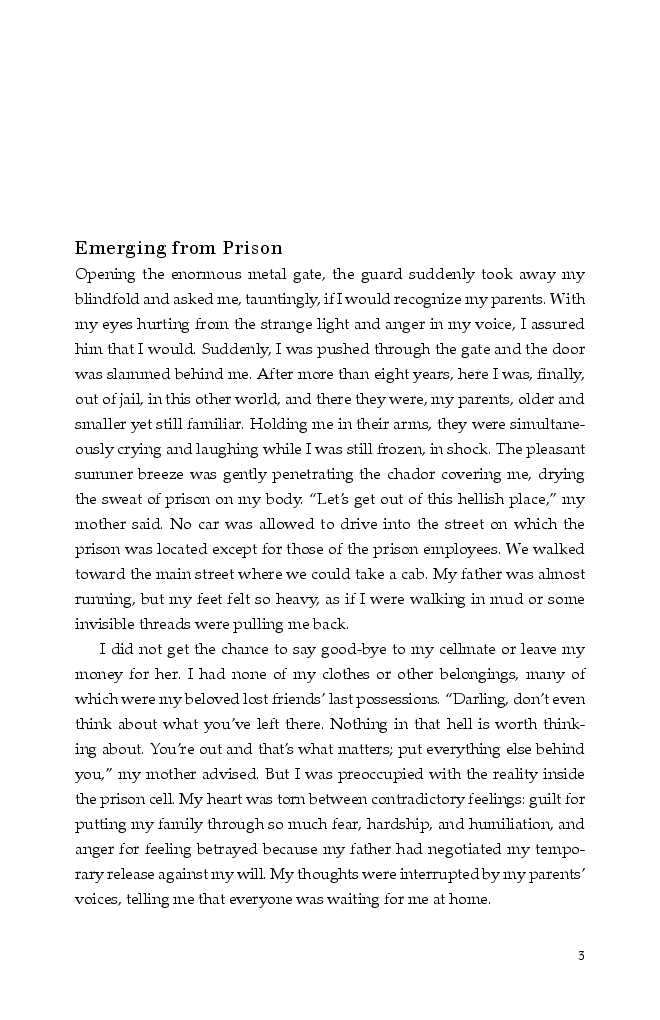 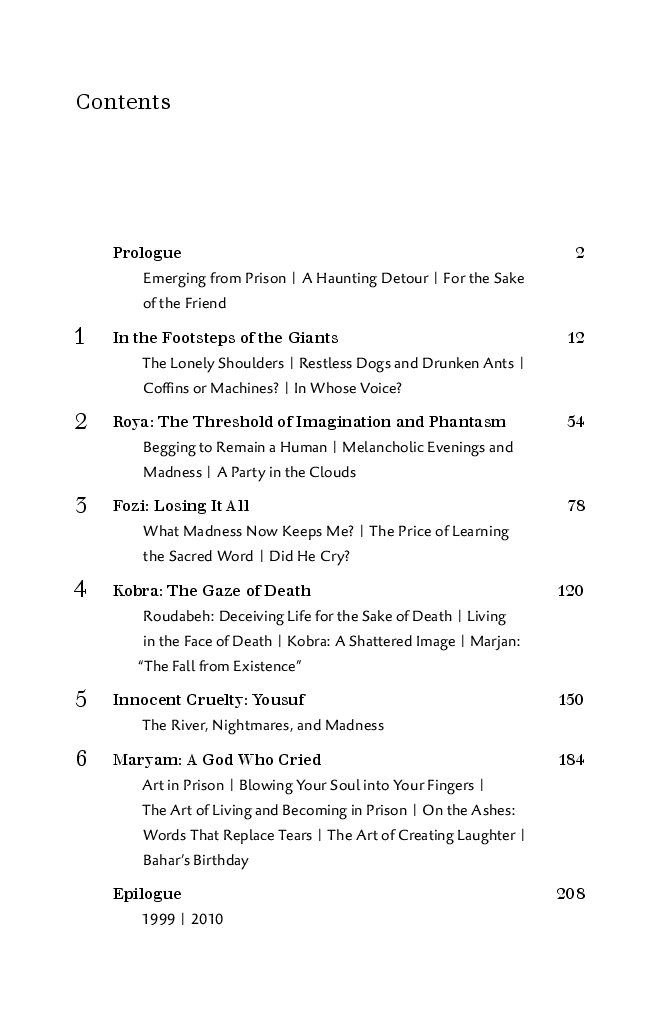