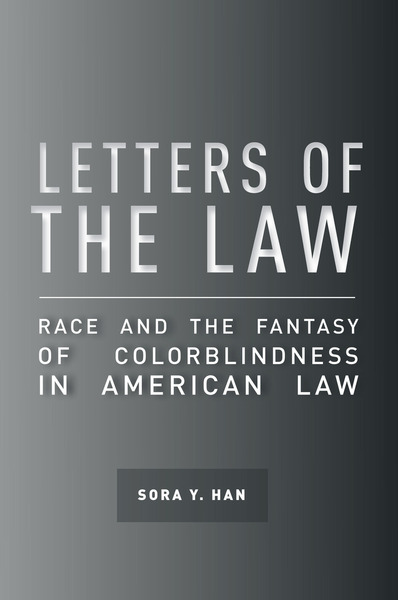 Letters of the Law
Race and the Fantasy of Colorblindness in American Law
Sora Y. Han
SERIES: The Cultural Lives of Law

One of the hallmark features of the post–civil rights United States is the reign of colorblindness over national conversations about race and law. But how, precisely, should we understand this notion of colorblindness in the face of enduring racial hierarchy in American society? In Letters of the Law, Sora Y. Han argues that colorblindness is a foundational fantasy of law that not only informs individual and collective ideas of race, but also structures the imaginative capacities of American legal interpretation. Han develops a critique of colorblindness by deconstructing the law's central doctrines on due process, citizenship, equality, punishment and individual liberty, in order to expose how racial slavery and the ongoing struggle for abolition continue to haunt the law's reliance on the fantasy of colorblindness.

Sora Y. Han is Assistant Professor of Criminology, Law and Society at the University of California, Irvine.

"The enduring power of critical race theory has been its ability to dissect the law, revealing the multitude of ways in which the legal process has reinforced, and continues to reinforce, discrimination. Han's book is part of this genre, succinctly, cogently, and in a creative fashion, exploring the fantasy of colorblindness rooted in American constitutional law . . . Recommended."

"Letters of the Law offers a profoundly engaged and sensitive reading of critical race theory. It illuminates not only the foundational antagonism of American law—between racism and equal rights—but also displaces the widely-accepted notion that racial disproportionality is the 'ur-fact of racial inequality.' Han has re-instantiated critical race theory as fundamental to any understanding of the law."

"Han proposes reading practices that enable us to counter law's injunction against imagination so that we can glimpse the camouflaged memories of slavery and freedom struggles that have become the foundational dream world of the law. Herein, she deftly argues, resides our hope to transform law and the manifold social hierarchies it protects and reproduces."

"A stunning inquiry into the racial haunt of the law, Letters of the Law is a rare example of that ornery beast we call 'interdisciplinary scholarship.' In this compelling and beautiful work, Han proves that the time of slavery is with us still."

—Colin Dayan, Vanderbilt University, author of The Law is a White Dog: How Legal Rituals Make and Unmake Persons

"In Letters of the Law, Sora Han takes readers on an adventure into the dreamwork of the law in order to deconstruct what she calls the fantasy of color blindness that haunts the landscape of American Constitutional jurisprudence...Han is at her best when she weaves unexpected textual threads around her chosen theoretical architecture. Despite her focus on the fantasy of color blindness, this is a colorful book indeed."