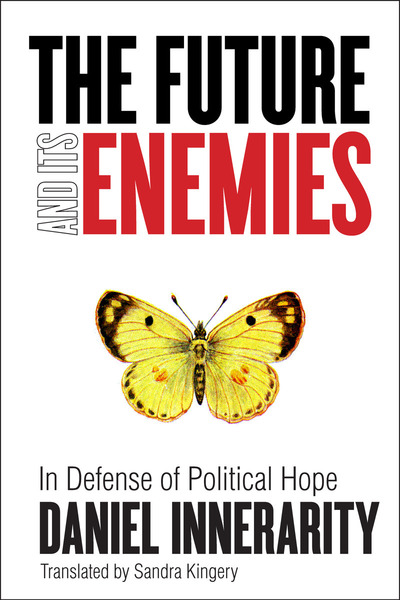 The Future and Its Enemies
In Defense of Political Hope
Daniel Innerarity Translated by Sandra Kingery
SERIES: Cultural Memory in the Present

Humans may be the only creatures conscious of having a future, but all too often we would rather not think about it. Likewise, our societies, unable to deal with radical uncertainty, do not make policies with a view to the long term. Instead, we suffer from a sense of powerlessness, collective irrationality, and perennial political discontent.

In The Future and Its Enemies, Spanish philosopher Daniel Innerarity makes a plea for a new social contract that would commit us to moral and political responsibility with respect to future generations. He urges us to become advocates for the future in the face of enemies who, oblivious to the costs of modernization, press for endless and unproductive acceleration. His accessible book proposes a new way of confronting the unknown—one grounded in the calculation of risk. Declaring the classical right-left divide to be redundant, Innerarity presents his hopes for a renewed democracy and a politics that would find convincing ways to mediate between the priorities of the present, the heritage of the past, and the challenges that lie ahead.

Daniel Innerarity holds the "Ikerbasque" Chair in Social and Political Philosophy at the University of the Basque Country, where he directs the Institute for Democratic Governance. His recent books include the prizewinningTransformation of Politics (2010) and La Sociedad invisible (2004). In 2005,Le Nouvel Observateur profiled him in its special issue dedicated to "25 Intellectual Leaders of the Contemporary World."

"[Innerarity] ably surveys a rich literature on the role of time in governance and planning in an erudite, pleasant-to-read style of grand social theorizing not unlike that of recent books by Zygmunt Bauman."

"This is a wonderful little book, striking the perfectly right balance between our hopes for the future and a realistic appraisal of where we presently are in contemporary Western democracies."

"Innerarity offers a practical alternative to the model that ignores the past. By treating the past as past, he asks us to recognize that there are real problems we can deal with now that might be rooted in that unchangeable history and, most importantly, that the future of our functioning democracies depends responsibly addressing these issues."

"Innerarity is the sole thinker to date, who is attuned to the futurity of actually exisiting democracies. . . [H]e masterfully combines the insights of a seasoned philosopher with the hands-on analyses of a political scientist or a sociologist. The conclusions of every chapter provide us with invaluable tools for coping with the complexity of our world without either simplifying or getting lost in it. At its best, The Future and Its Enemies maintains alive the very future of political philosophy."

"To Innerarity, modern societies ignore the future by treating it as a mere accumulation of small decisions in an endless present. . . Although belief in automatic progress has dissipated, Innerarity hopes individuals will now take responsibility for an open future with its character dependent on a leading role for civil society. . . Recommended."

"Thanks to its clear analyses and its multiple avenues of inquiry, this essay points the way to a new democratic lucidity."

"The future no longer holds meaning for societies in thrall to the present. And in this present devoid of meaning, we have as much trouble accepting the legacy of the past as we do envisaging collective action that would take us beyond ourselves. We're obsessed by the here and now and incapable of making plans that would engage us and the future of society as a whole. Without a vision of what is yet to come, and without the will to endow it with meaning, we are reduced to the insignificance of our moment, that of a present ignorant of both its past and future."

"As we increasingly accelerate our transformation of the present, the future has slowly disappeared. Daniel Innerarity ferrets out this future and finds it where it is to be found: in the discussions that give rise to it, discussions powerful enough to anticipate the ever faster changes to our present. The future is not the result of necessity but of political action. This last only has meaning if it entails choosing a future; if it does not, it already belongs to the past.Political action must look ever further ahead so as not to be overtaken by the convulsions of the short term. Against those who define themselves as post-modern, Innerarity discovers a world of hope and of controlled transformations. The more we discover the future behind the accelerations of the present, the more we find the possibility of choice and the responsibility of making decisions. In so doing, we liberate ourselves from imprisonment in a present that will accelerate on automatic pilot, rejecting intervention of any form and thus any form of democracy.The struggle between the destroyers of the future and its liberators is now central. It has replaced the opposition between the right and the left, because conservers of the present and creators of the future are everywhere to be found. After so many ideologies and somber philosophies that forbid us any future, Daniel Innerarity allows us, and even imposes upon us, an optimism that is also our freedom."

"In this fascinating inquiry into how our image of the future has changed and into the consequences of this modification for democracy, Innerarity explores the challenges of post-heroic politics and the prospect for reclaiming hope as part of transformative politics. The Future and Its Enemies enriches our democratic imagination with new vistas." 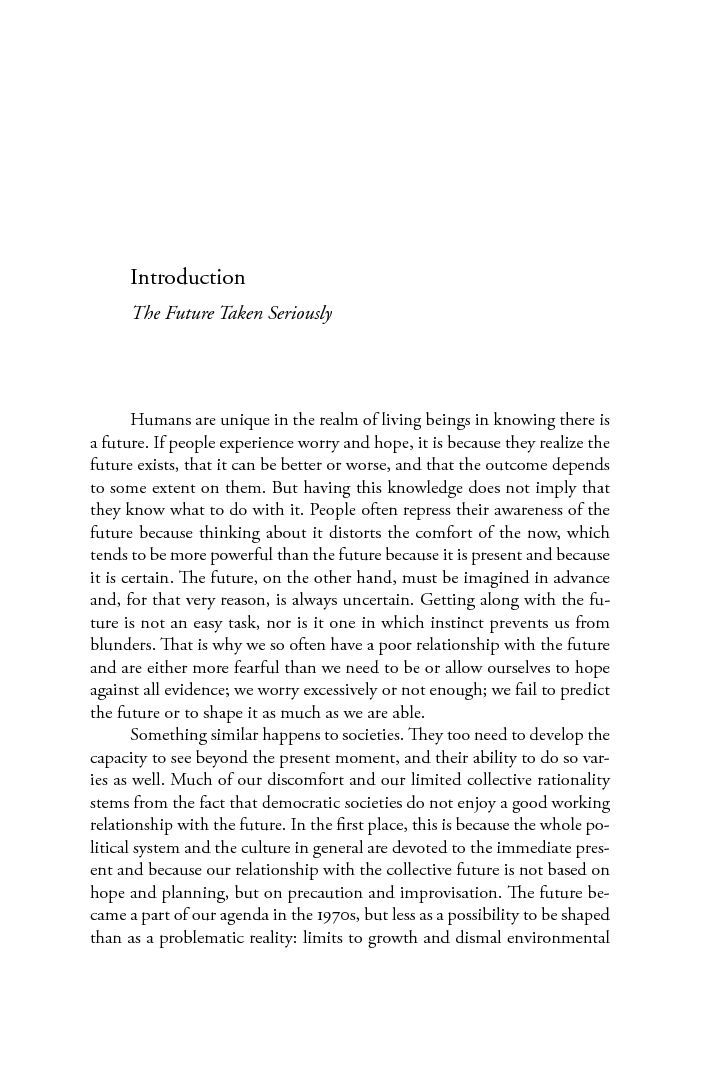 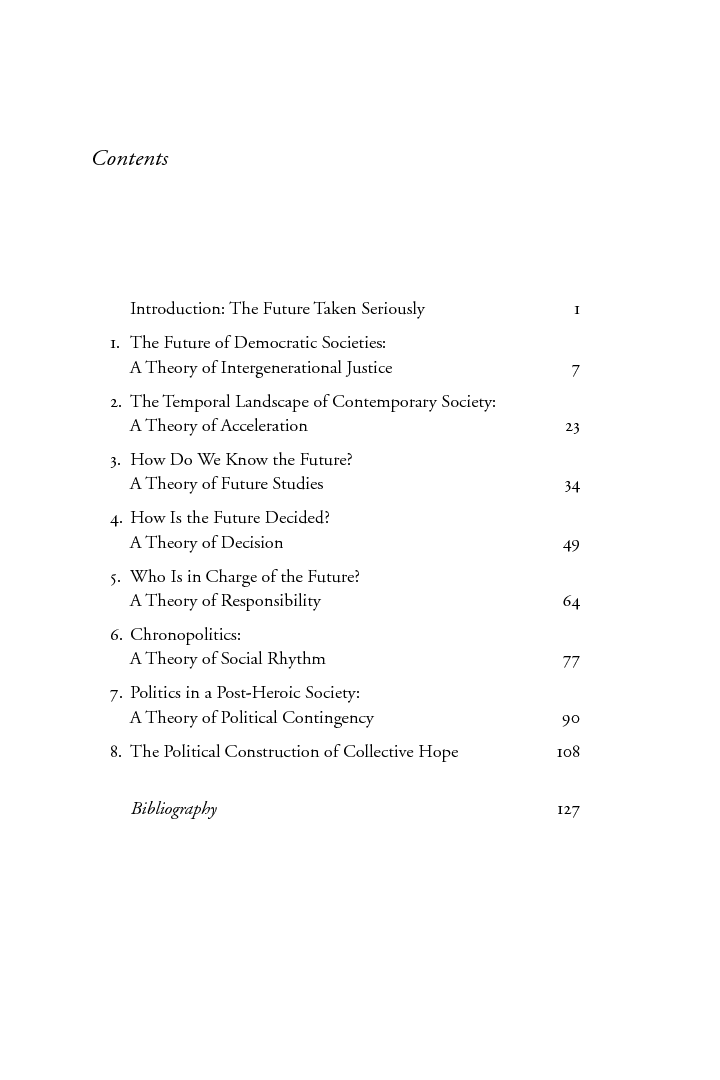