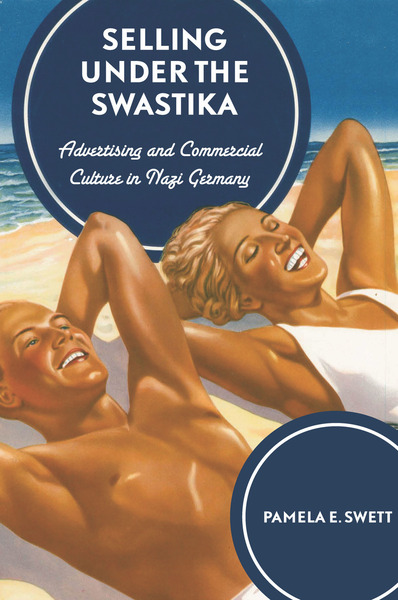 Selling under the Swastika is the first in-depth study of commercial advertising in the Third Reich. While scholars have focused extensively on the political propaganda that infused daily life in Nazi Germany, they have paid little attention to the role played by commercial ads and sales culture in legitimizing and stabilizing the regime. Historian Pamela Swett explores the extent of the transformation of the German ads industry from the internationally infused republican era that preceded 1933 through the relative calm of the mid-1930s and into the war years. She argues that advertisements helped to normalize the concept of a "racial community," and that individual consumption played a larger role in the Nazi worldview than is often assumed. Furthermore, Selling under the Swastika demonstrates that commercial actors at all levels, from traveling sales representatives to company executives and ad designers, enjoyed relative independence as they sought to enhance their professional status and boost profits through the manipulation of National Socialist messages.

Pamela E. Swett is associate professor of history at McMaster University. She is the author of Neighbors and Enemies: The Culture of Radicalism in Berlin, 1929–1933 (2004).

"Pamela Swett's Selling Under The Swastika examines the issue of consumption from a different angle, by looking at the ways in which consumer goods were marketed during the Nazi period . . . The most innovative aspect of her work deals with the ways in which the marketing activities of private companies reinforced the political goals of the regime by contributing to the vision of a racial Volksgemeinschaft of consumers."

"The central premise of Selling under the Swastika, a surprisingly rich and thought-provoking monograph, can be formulated very briefly: the consumer culture emerging in the German Federal Republic after the Second World War - an essential component of post-war economic growth - was deeply rotted in the practice of advertising that gained shape in the dark past of the Nazi era . . . Selling under the Swastika is [...] and indispensable read for those interested in the history of business and consumption in the Third Reich, the international resurrection of German breaks and the formation of a consumer society in the Federal Republic."

"[W]ell-argued and deeply researched . . . Swett has written a nuanced, empirically solid, and analytically acute reconstruction of advertising and commercial culture in the Third Reich. It illuminates both the history of modern Germany and of advertising."

"Selling under the Swastika provides illuminating research which reaches beyond ideology while remaining attentive to it. Swett's broad conclusion, that commercial advertising retained consumer confidence in the aftermath of a war which badly dented the credibility of political propaganda, suggests that 'serving the nation' proved itself as an advertising strategy."

"In Selling under the Swastika, Pamela E. Swett presents an interesting analysis of the role of advertising for both sellers and buyers from the Weimar era to the start of the Cold War . . . What Swett brings to the discussion with Selling under the Swastika is an emphasis on the apparent independence of advertising despite the general perception of Nazi-era control of all aspects of the economy."

"The proliferating interest in consumer-related issues over the past three decades has brought an increased appreciation of the political aspects of business behavior and the advertising industry that supports it. In Selling under the Swastika: Advertising and Commercial Culture in Nazi Germany, historian Pamela Swett paints an intriguing picture of how 'the language of buying and selling' came to serve a powerful propaganda function in the Third Reich . . . Selling under the Swastika [is] an excellent contribution to the growing scholarship on advertising histories. I am convinced it will find a large and well-deserved audience in fields including communication, consumption studies, management history, and political science."

"Through six carefully constructed chapters, Swett tests recent theories suggesting that in everyday life in Nazi Germany, Germans externalized the tropes of the regime even when they did not subscribe to its ideology . . . This very important study sheds new light on sociocultural facets of Nazi Germany and helps dissect the evolution of advertising in the 20th century . . . Highly recommended."

"An impressively researched study of an important subject. Selling under the Swastika combines cultural history with business history to present a detailed picture of advertising in Germany from the Weimar period to the early post-war years, and offers fascinating insight into the commercial and public sphere in Nazi Germany."

"In this provocative and original analysis, Swett shows how the bright world of brand names, advertising slogans, and shopping expeditions nestled itself into the racial imperatives of the Third Reich as 'Aryans' sought the pleasures and entitlements of consumption."

"Spanning the period from the late 1920s to the early 1950s, the book makes visible important continuities between the commercial culture of the 1930s and the economic miracle of the 1950s ... [This book] offers a refreshing approach to economic, business, and cultural history, which, I should hope, historians of the Third Reich find both inspiring and commendable." 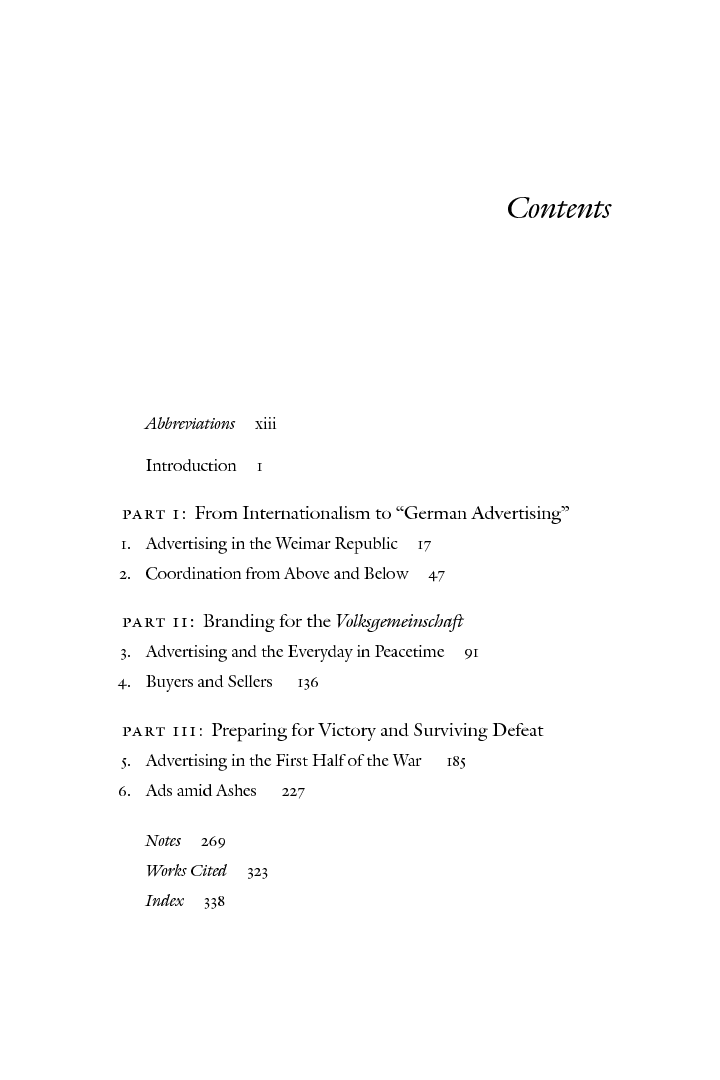 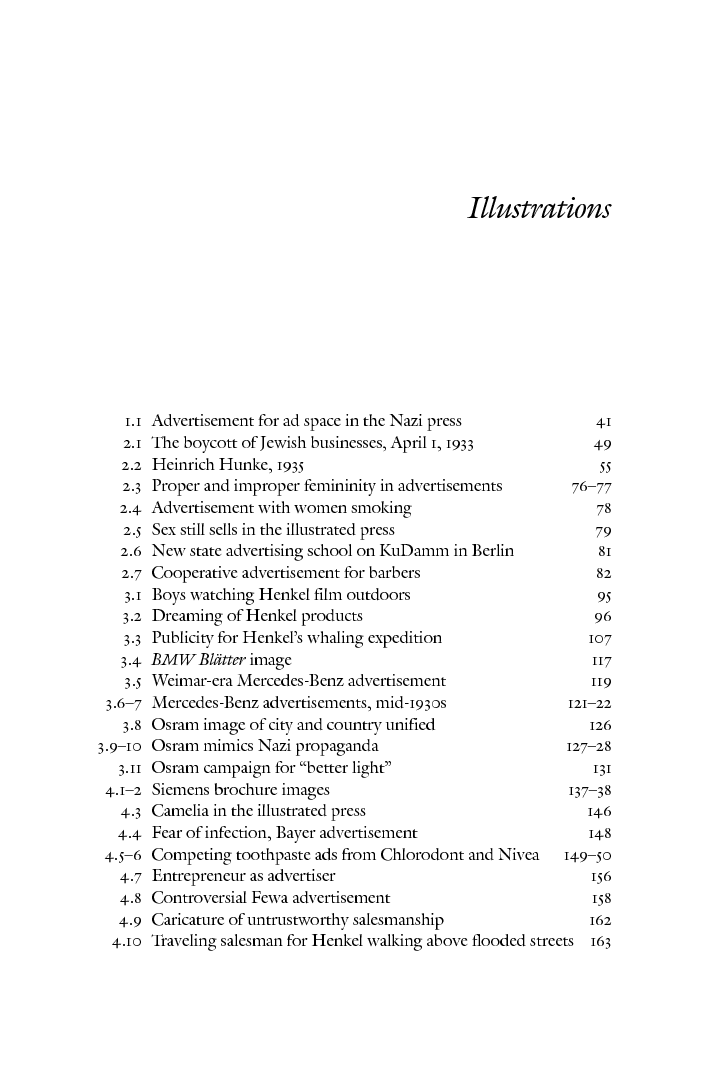 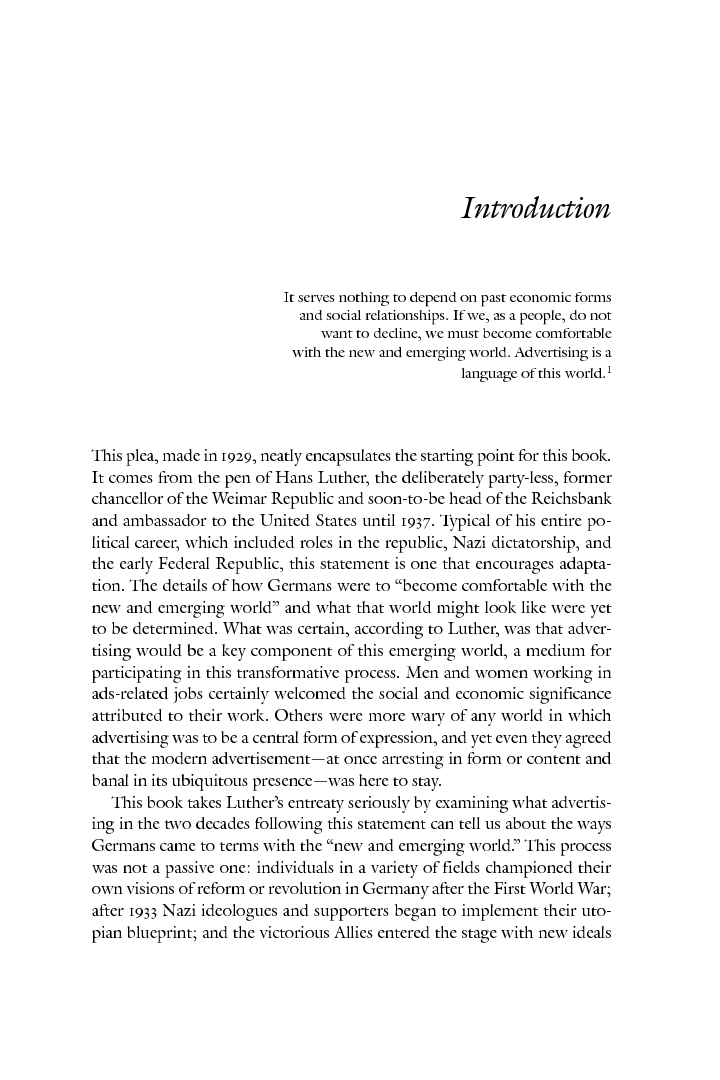