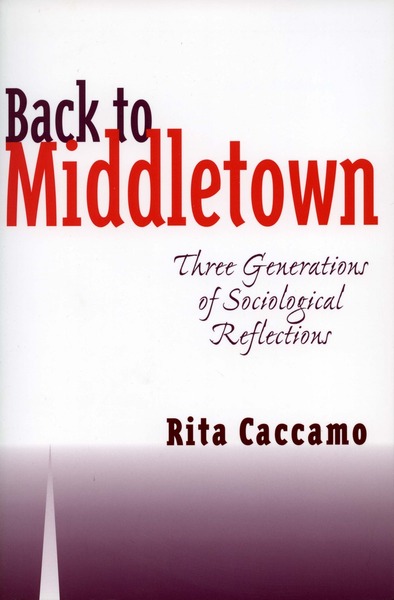 Published in 1929, Robert Lynd and Helen Merrell Lynd's Middletown: A Study in Modern American Culture was destined to become a sociological point of reference for the quality of life in an "average" American town in the 1920s. Their Middletown in Transition, a 1937 restudy of the same community—now known to be Muncie, Indiana—provided a second point of reference on community values in the midst of the great American depression. Achieving the status of cultural benchmarks, these two books have generated an enormous secondary literature on Muncie/Middletown, including a two-volume restudy by Theodore Caplow, published in the 1980s, and a series of six documentary films.

Back to Middletown differs from the numerous other investigations and analyses of one of the most famous community studies in the history of sociology. The author, an Italian sociologist, examines the complete Middletown saga through the distinctive lens of an outsider, tracing the character and evolution of "middle America" from the Lynds' time down to the present. She has been resourceful and meticulous in her discovery of previously unknown sources—data, documents, and correspondence—that shed new light on the formation and elaboration of the Lynds' Middletown project and on the changing evaluation of the project by generations of scholars.

In the process, the book addresses, from a fresh perspective, major issues that have confronted sociology and social anthropology: relative levels of analysis, the relationship of empirical observation to theory building and conceptual frameworks of interpretation, and controversies focusing on the structure of power in America. In addition to its value and import as a theoretical work, the book takes up questions that reflect the contemporary contradictions and dissonances in the American social fabric. As the author demonstrates, the story of Middletown is a continuing narrative, whose end is yet to be written, encapsulating the pain of social and economic alienation, political war, religious messianism, and personal demoralization.

Rita Caccamo is Lecturer in the History of Sociology at the University of Rome "La Sapienza."

"The Lynds' works became sociological classics . . . and gave rise to a subgenre of sociology called Munciology. In this volume, Caccamo reanalyzes the Lynds' findings and reports on her extended visit to Muncie in the late 1980s. She is an objective observer truly distanced from the cultural and religious biases that tainted the initial works. This almost anthropological study of Muncie is an excellent companion to the Lynds' works and serves as a great cultural study of small-town America in the late twentieth century."

"Caccamo birngs to 'the Muncian tribe and its sociological investigators' the fresh perspective of a cosmopolitan European. . . . A graceful, humane, and provocative work, Back to Middletown is a model of scholarship that is also art."