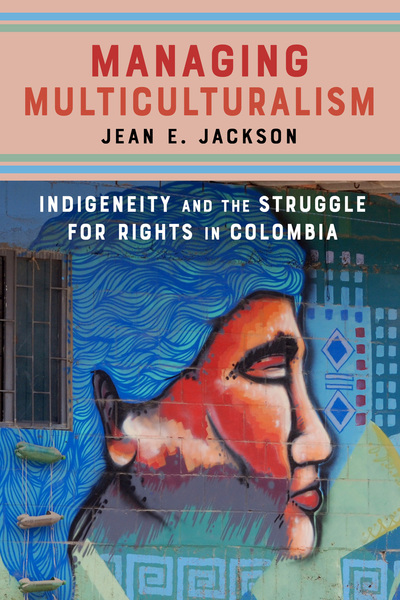 Indigenous people in Colombia constitute a mere three percent of the national population. Colombian indigenous communities' success in gaining collective control of almost thirty percent of the national territory is nothing short of extraordinary. In Managing Multiculturalism, Jean E. Jackson examines the evolution of the Colombian indigenous movement over the course of her forty-plus years of research and fieldwork, offering unusually developed and nuanced insight into how indigenous communities and activists changed over time, as well as how she the ethnographer and scholar evolved in turn.

The story of how indigenous organizing began, found its voice, established alliances, and won battles against the government and the Catholic Church has important implications for the indigenous cause internationally and for understanding all manner of rights organizing. Integrating case studies with commentaries on the movement's development, Jackson explores the politicization and deployment of multiculturalism, indigenous identity, and neoliberalism, as well as changing conceptions of cultural value and authenticity—including issues such as patrimony, heritage, and ethnic tourism. Both ethnography and recent history of the Latin American indigenous movement, this works traces the ideas motivating indigenous movements in regional and global relief, and with unprecedented breadth and depth.

Jean E. Jackson is Professor Emerita of Anthropology at Massachusetts Institute of Technology. Her books include Indigenous Movements, Self-Representation and the State in Latin America (2002), co-edited with Kay B. Warren, and "Camp Pain": Talking with Chronic Pain Patients (2000).

"Engaging, informed, and provocative, this book is a must-read from one of the leading lights of indigenous studies. Jean Jackson brings five decades of work with indigenous people to bear on contemporary debates. Managing Multiculturalism offers a major intervention into legal pluralism, reindigenization, and multiculturalist discourses."

"A deep and impressive work of historical ethnography. With tact and critical rigor, Jean Jackson interrogates her own changing attitudes over a half-century of research in Colombia. The result is an acute analysis of new performances of 'indigeneity' that renew and reinvent old traditions in contexts of neoliberal multiculturalism. Jackson offers provocative stories and resonant images that force us to grapple with the paradoxes and contradictions of entangled cultural transformation. Never content with simple answers, she sustains an engaged, self-critical realism, open to surprise and contingency."

"Managing Multiculturalism is a powerful braided narrative. Jean Jackson traces, how, over time, indigenous people in Colombia have struggled to define themselves, constructing notions of cultural belonging that are increasingly tied to ever more complex political structures and legal foundations. Jackson also uses the recent history of indigenous identity formation as a frame for questioning the development of her own ideas about cultural authenticity, pointing out the limitations that ethnographers and other social analysts—both Colombian and from the global North—have faced over the years in trying to square the circle, by unsuccessfully forcing a multifarious process to conform to anthropological notions of culture. Taking readers by the hand and leading them, step by step, through the analytical quandaries she faced and the mistakes she confesses to have made, Jackson uses her personal experience to expose the fault-lines of indigenous studies."

"[Jackson] provides a nuanced, personal account of how the goals of indigenous communities and local community activists have changed over time.Managing Multiculturalism is an impressive work of historical ethnography and amply demonstrates the fruitfulness of long-term ethnographic research."––S. D. Glazier, Choice

"Jackson's highly readable monograph makes an important contribution to the literature about ethnicity, identity formation, and interstate and ethnic-minority relations....[It] offers a much-needed look into the political organization of indigenous groups in the tropical forest."

"[A] provocative meditation on the struggle for Indigenous recognition in Colombia....Jackson, one of the leading anthropologists of Latin America, brings five decades of experience to bear in telling this story. [Her] commitment to Colombia and its Indigenous movement(s) is clear."

"While multiculturalism is often considered a rather innocuous if circular concept that 'does' what it 'is,' Jackson deftly illustrates multiple ways that it is edgily ideological and often cynically governmental, focused as much or more on containment and control as on acceptance and plurality....Managing Multiculturalism more than succeeds in illuminating the value of reflective and engaged anthropological work over the long span of a career that provides intellectual, analytical, and testimonial dimensions to cultural survival and indigenous human rights in the Americas."

"[Offers] valuable insight on indigenous politics in Colombia. Jackson expertly deploys the concept of indigeneity to tie together a broader reflection on the evolution of her 'object of study, methodology, and theoretical approach' and reviews in great detail over four decades of rights development and indigenous cultural politics."

"Jackson's historical analysis provides useful elements for tracing the entanglements of indigenous strategies and complex, often contradictory, political and legal contexts....[The] rich examples and informed, thought-provoking discussion of how the meanings and performances of indigeneity have changed over time make Managing Multiculturalism a must-read for anyone interested in indigenous studies and in broader questions about cultural difference."

"Jean Jackson's Managing Multiculturalism... is an insightful and compelling appraisal of the organization and mobilization by indigenous people in Colombia since the 1970s as a distinctive indigenous movement. For Jackson, this process has been both cause and effect of a broader one: a notable shift among Colombians from anxiety about, to celebration of indigenous belonging."