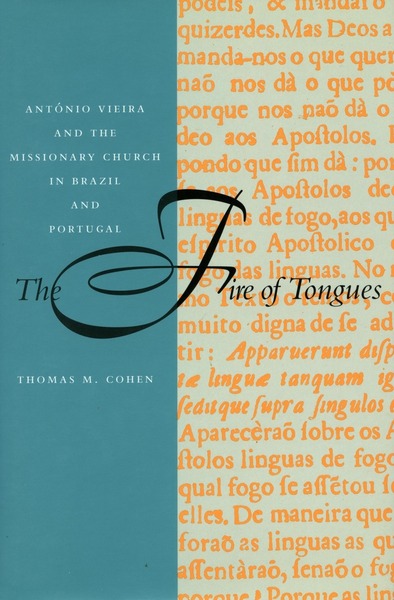 The Fire of Tongues
António Vieira and the Missionary Church in Brazil and Portugal
Thomas M. Cohen

The Fire of Tongues is a study of the religious and social thought of the Jesuit António Vieira (1608-97), one of the great preachers, writers, and missionaries of the seventeenth century. A key actor in European and Ibero-American politics of the period, Vieira argued throughout his seventy-year career that the Portuguese nation was destined to lead the Catholic church in its mission to convert the Jews of Europe and the non-Christian peoples of the New World. The tension between the missionary enterprise and the Portuguese imperial agenda provides The Fire of Tongues with its principal theme.

The author focuses on three periods in Vieira's career. The first is his mission to Brazil (1653-61), which took place during an era marked by conflict between the Jesuit missionaries and their fellow Europeans. The latter resented the Jesuits' responsibility for administering the allocation of Indian workers, and Vieira exacerbated the conflict by bringing under Jesuit control the notorious slaving expeditions the Portuguese were conducting in the backlands. After being forcibly returned to Portugal by his opponents, Vieira spent five years in the custody of the Inquisition (1663-67).

The author argues that the Inquisition's persecution of Vieira was a result of his criticism of the church hierarchy in the Luso-Brazilian world, set forth in his preaching and prophetic writings. For Vieira, the New World was a locus of prophecies that the Portuguese had been providentially chosen to reveal. Every group that participated in the imperial project—the crown and settlers, the missionaries and Indians, and the Inquisitors—had a role to play in the schema of revelation that Vieira drew from scripture and then read into Portuguese history and into the history of the missionary church.

When Vieira returned to Brazil for the last time (1681-97), he brought with him an interpretation of colonial society and of the missionary vocation that differed greatly from the one he had brought to the Amazon almost thirty years before. No longer did he seek to enlist all Portuguese society in the missionary enterprise. Instead, Vieira focused in his later writings on two groups he believed could successfully advance that enterprise: the Jesuits and the Portuguese crown. Rather than being infused with the tongues of fire as the Apostles were on Pentecost, the Jesuits, Vieira argued, were infused with the fire of tongues manifested in their mastery of the languages they encountered in the mission field. Armed with the fire of tongues, the Jesuits would build a church that would embrace the many languages and peoples of the New World.

Thomas M. Cohen is Curator of the Oliveira Lima Library and Associate Professor of History at The Catholic University of America.