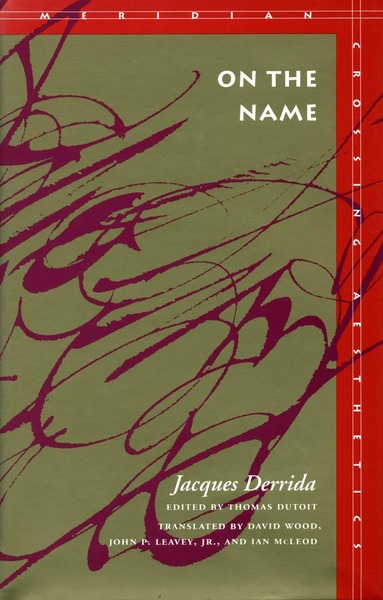 "The name: What does one call thus? What does one understand under the name of name? And what occurs when one gies a name? What does one give then? One does not offer a thing, one delivers nothing, and still something comes to be, which comes down to giving that which one does not have, as Plotinus said of the Good. What happens, above all, when it is necessary to sur-name, renaming there where, precisely, the name comes to be found lacking? What makes the proper name into a sort of sur-name, pseudonym, or cryptonym at once singular and singularly untranslatable?"

Jacques Derrida thus poses a central problem in contemporary language, ethics, and politics, which he addresses in a liked series of the three essays. Passions: "An Oblique Offering" is a reflection on the question of the response, on the duty and obligation to respond, and on the possibility of not responding—which is to say, on the ethics and politics of responsibility. Sauf le nom (Post Scriptum) considers the problematics of naming and alterity, or transcendence, raised inevitably by a rigorous negative theology. Much of the text is organized around close readings of the poetry of Angelus Silesius.

The final essay, Khora, explores the problem of space or spacing, of the word khora in Plato's Tmaeus. Even as it places and makes possible nothing less than the whole world, khora opens and dislocates, displaces, all the categories that govern the production of that world, from naming to gender. In addition to readers in philosophy and literature, Khora will be of special interest to those in the burgeoning field of "space studies"(architecture, urbanism, design).

“A major new book by Derrida that represents his most recent thinking, and includes landmark readings of Plato and the German poet-mystic Angelus Silesius. The essays are wonderfully rich and provocative, and, in spite of their apparent diversity of topic, are bound together as three ways of approaching the problematic of naming and speaking of something that exceeds ‘isness.’ ” —J. Hillis Miller, University of California, Irvine