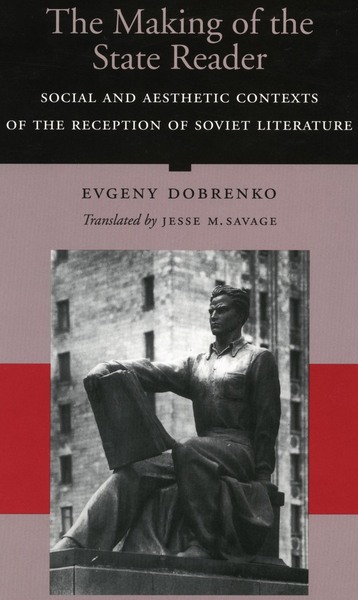 The Making of the State Reader
Social and Aesthetic Contexts of the Reception of Soviet Literature
Evgeny Dobrenko Translated by Jesse M. Savage

The entire history of the formation and transformation of the institution of literature in the revolutionary and Soviet eras bears witness to the fact that literature was called upon to perform substantive political and ideological functions in the authorities’ overall system (which included the publishing business, the book trade, libraries, and schools) aimed at ultimately creating a new Soviet person. This book shows how people from various social classes, in a dynamic unknown in pre-Soviet history, not only consumed the products of a new culture but in fact created that culture.

On its own, the sociology of reading is scarcely capable of uncovering the variety, dynamism, and multilayered structure of the process of reading, for the reader is a composite figure. Soviet society in the Stalin era was not only a State-hierarchy system, but also a mosaic that was always divided into definite cultural strata, each of which consumed its own culture, which performed a host of familiar functions—escapist, socializing, compensating, informative, recreational, prestige-enhancing, aesthetic, and emotional—in addition to the specifically Soviet tastes connected with propaganda and mobilization.

If we superimpose on this spectrum the diverse characteristics of individual readers, the resulting picture is extraordinarily variegated. At the same time, there is a certain cultural space in which these factors intersect—the space the author defines as the “situation of reading.” In this book, he focuses on the basic lines of force that were at work in the Soviet reading space.

Evgeny Dobrenko is Associate Professor of Slavic Languages and Literatures at Duke University. This is his first book to appear in English.