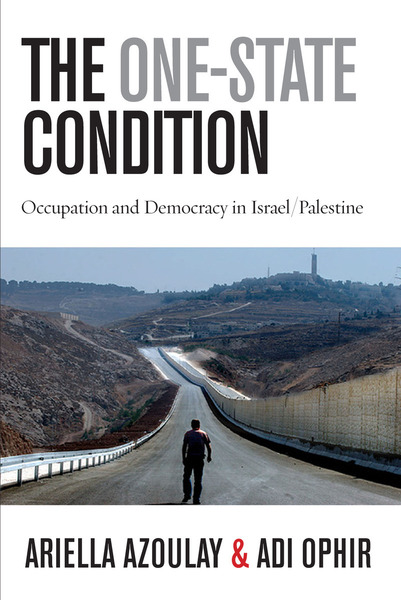 Since the start of the occupation of Palestinian territories in 1967, Israel's domination of the Palestinians has deprived an entire population of any political status or protection. But even decades on, most people speak of this rule—both in everyday political discussion and in legal and academic debates—as temporary, as a state of affairs incidental and external to the Israeli regime. In The One-State Condition, Ariella Azoulay and Adi Ophir directly challenge this belief.

Looking closely at the history and contemporary formation of the ruling apparatus—the technologies and operations of the Israeli army, the General Security Services, and the legal system imposed in the Occupied Territories—Azoulay and Ophir outline the one-state condition of Israel/Palestine: the grounding principle of Israeli governance is the perpetuation of differential rule over populations of differing status. Israeli citizenship is shaped through the active denial of Palestinian citizenship and civil rights.

Though many Israelis, on both political right and left, agree that the occupation constitutes a problem for Israeli democracy, few ultimately admit that Israel is no democracy or question the very structure of the Israeli regime itself. Too frequently ignored are the lasting effects of the deceptive denial of the events of 1948 and 1967, and the ways in which the resulting occupation has reinforced the sweeping militarization and recent racialization of Israeli society. Azoulay and Ophir show that acknowledgment of the one-state condition is not only a prerequisite for considering a one- or two-state solution; it is a prerequisite for advancing new ideas to move beyond the trap of this false dilemma.

Ariella Azoulay is Director of Photo-Lexic, Tel Aviv University. She is the author of The Civil Contract of Photography (2008) and Death's Showcase: The Power of Image in Contemporary Democracy (2001).

Adi Ophir is Professor of Philosophy and Political Theory, Tel Aviv University. He is a coeditor of The Power of Inclusive Exclusion: Anatomy of Israeli Rule in the Occupied Palestinian Territories (2009) and the author of The Order of Evils: Toward and Ontology of Morals (2005).

"The first section is a crucial analysis of the nature of the occupation. The later critique is an important contribution to a critical theory of Israeli politics."

"The authors define their concepts and arguments clearly, and convincingly build the case that Israel as a regime is reliant or contingent upon its occupying activities. The One-State Condition is a must-have aid, not just for navigating the reality of the Isreal-Palestine conflict as it occurs on the ground, but for reading between the lines of other news sources"

"[The One State Condition] is one of the most exhaustive resources on the creation, maintenance and entrenchmer of Israel's occupation of the West Bank and Gaza available in any language. . . a startling clear picture of the nature of the Israeli regime is sure to surprise even the most intense observer of the Israeli-Palestinian discourse."

"This book is a brilliant, deeply analytical, and thorough study in re-conceptualizing the Israeli Occupation and the nature of the Israeli regime. It is required reading for all who are interested in a deeper understanding of the state of affairs of the Israeli-Palestinian case. Azoulay and Ophir offer one of the most remarkable books written so far in this field."

"This book is a meticulous exploration of the post-1967 Israeli Occupation of the West Bank and Gaza. In laying bare Israel's structural, conceptual and bureaucratic regimes of settler, civilian and military authorities over the Palestinian inhabitants, authors Ariella Azoulay and Adi Ophir analyze and consider consequences and solutions for the entire region to the operationalized Jewish principle of self-segregation."

—Susan Slyomovics, University of California, Los Angeles, author of The Object of Memory: Arab and Jew Narrate the Palestinian Village

"'Neither democratic nor Jewish': this is how Azoulay and Ophir provocatively describe the current regime of the State of Israel, their country of citizenship, in response to the increasing fusion of state formation and colonial occupation. To conceive of a civil association among Jews and Arabs equally considered within the land of historic Palestine—whatever its constitutional form—the authors deconstruct the strategies of ethnic exclusion and systematically envisage the means of liberating political imagination. This will be deemed treason by some, utopia by others, but it is a courageous and well-informed contribution to reopening the future. The alternative is catastrophe."

—Etienne Balibar, author of We, the people of Europe?

"Ethically and politically committed, Azoulay and Ophir challenge—to put it mildly—hegemonic Zionist Israeli statements that the Palestinian occupation is not part of what 'we' are. With eloquent and impassioned arguments, they acutely undermine the sterile indulgences of current Israeli politics, and ultimately widen the horizon of debate for the political possibilities and future of Israel and Palestine."

"This is a first-rate intervention into understanding how the Israeli occupation operates. Innovative and insightful, the volume also transcends the local case to shed new light on violence and governance in conflict zones the world over. A profound contribution to our understanding of the colonial presence." 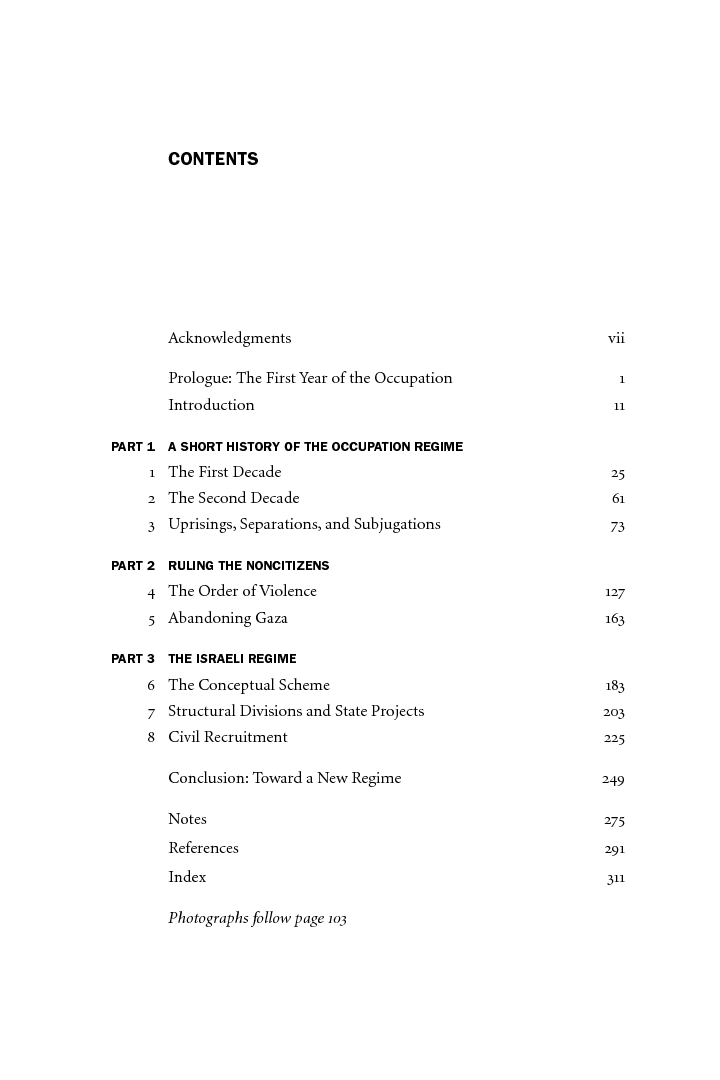 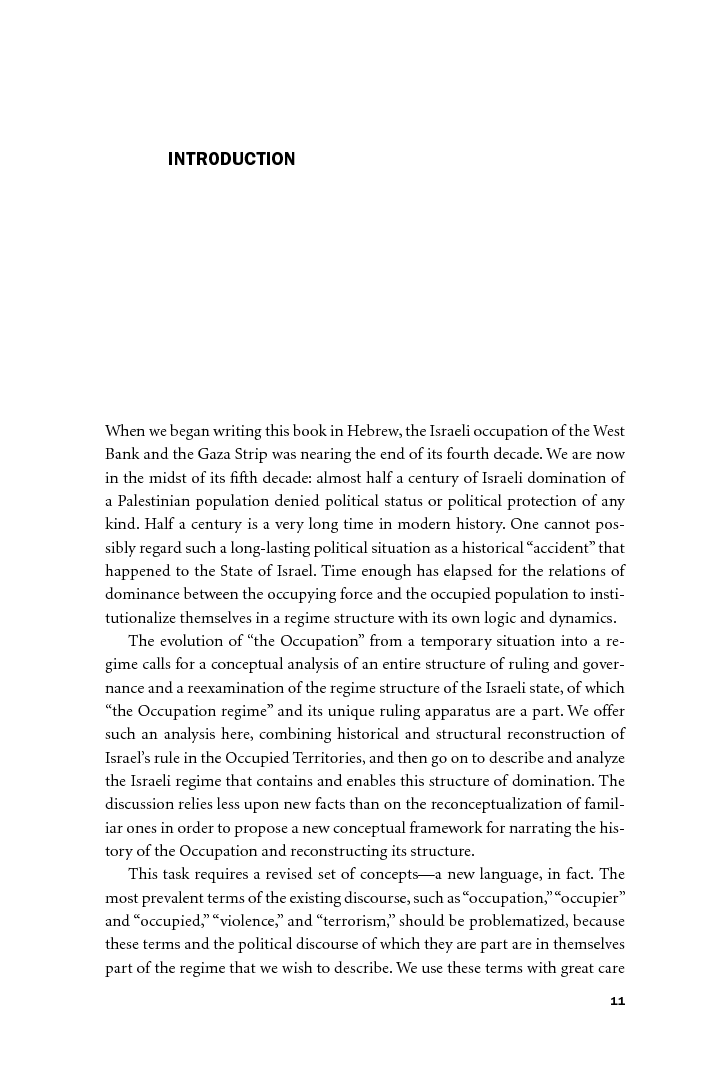 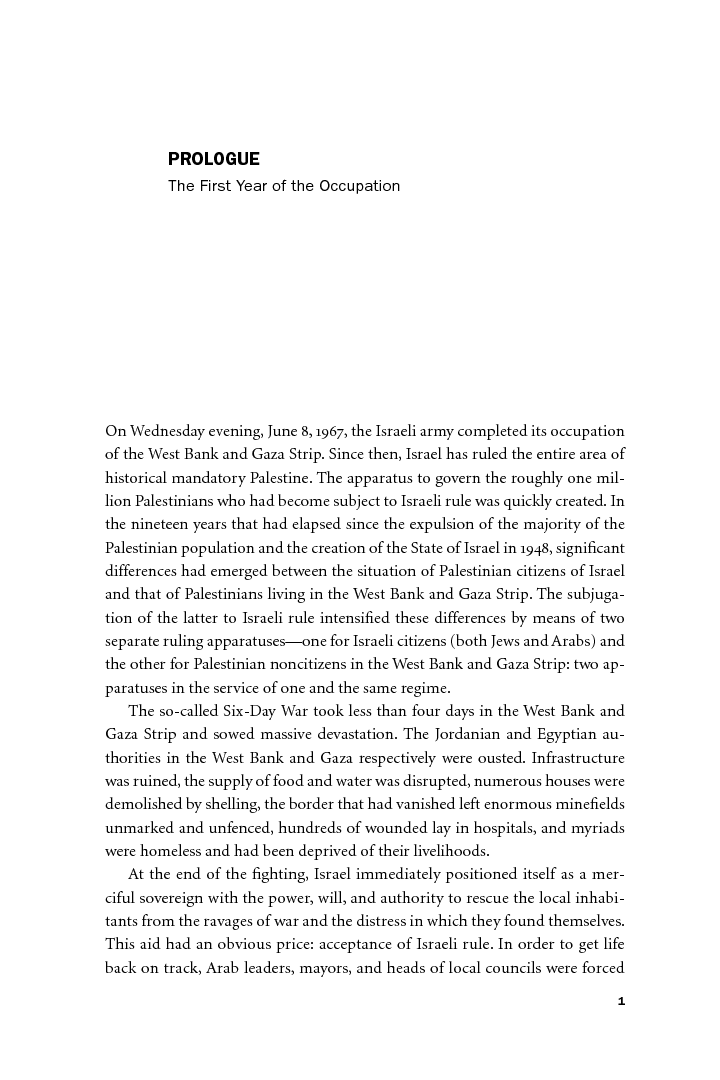