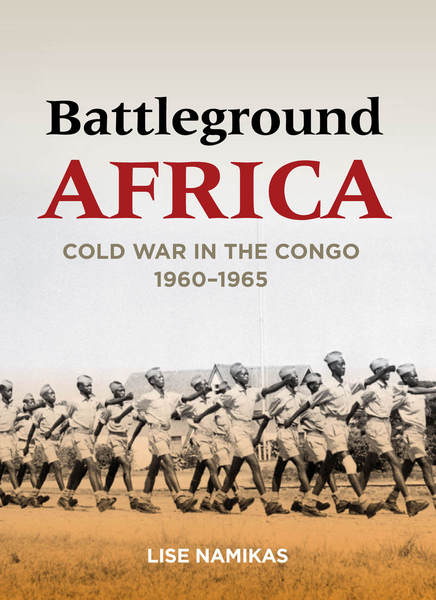 Winner of the 2013 Choice Award for Outstanding Academic Title

Battleground Africa traces the Congo Crisis from post-World War II decolonization efforts through Mobutu's second coup in 1965 from a radically new vantage point. Drawing on recently opened archives in Russia and the United States, and to a lesser extent Germany and Belgium, Lisa Namikas addresses the crisis from the perspectives of the two superpowers and explains with superb clarity the complex web of allies, clients, and neutral states influencing U.S.-Soviet competition.

Unlike any other work, Battleground Africa looks at events leading up to independence, then considers the assassination of Patrice Lumumba, the series of U.N.-supported constitutional negotiations, and the crises of 1964 and 1965. Finding that the U.S. and the USSR each wanted to avoid a major confrontation, but also misunderstood its opponent's goals and wanted to avoid looking weak or losing its political standing in Africa, Namikas argues that a series of exaggerations and misjudgements helped to militarize the crisis, and ultimately, helped militarize the Cold War on the continent.

Lise Namikas is an adjunct instructor at Louisiana State University and helped to organize the Wilson Center's Congo Crisis Oral History Conference in 2004.

"Author Lise Namikas provides the reader with a careful examination of the factors—both domestic and international—involved in the confrontations that finally culminated in Joseph Mobutu's seizure of power in 1965 . . . Moreover, she writes in a way that draws the reader into the narrative she is presenting . . . An important factor that separates this excellent volume from other recent studies of aspects of the early years of the Cold War is the author's success in melding her source materials in a way that integrates both the vast documentary material—from U.S., Russian, Belgian, United Nations, and other sources—on which she draws, along with a broad range of important secondary literature, including the often-ignored assessments written at the time of the events under examination."

"A half-a-century after the Congo Crisis of 1960–1965, and in the wake of numerous books and articles about the subject, is there anything more to say? In her thoroughly researched new book, Lise Namikas has ably demonstrated that the answer is yes. Building on the work of earlier scholars, Namikas has made a remarkable contribution that deepens our understanding of the Central African crisis that marked Africa as a key Cold War battleground. The importance of her work may at first be obscured by her central premise, which has been widely accepted: the way in which the Congo Crisis played out defined the Cold War in Africa and deeply influenced the course of decolonization elsewhere on the continent. It is her unique source base and multilayered vantage point that renders her contribution so valuable."

"In this very valuable study of Cold War politics in the Democratic Republic of Congo's rocky first five years of independence from 1960 to 1965, Namikas draws on Soviet, East German, and Western archives to examine U.S., Soviet, and varied Congolese actors in the Congo. Even readers well-informed in Congolese history will find new and intriguing material here. . . . The book is well-organized and written clearly, and work well for upper-division undergraduate and graduate courses. For specialists of the Cold War, this is a must-read study for understanding the Soviet and U.S. struggle for influence in Africa in the 1960s. . . . Highly recommended."

"The author's command of Soviet and East Bloc sources is very impressive, and adds a new dimension to the literature that has been lacking in past studies, which have relied on Western documents sets, especially from the US."

"This is a major work on a significant topic that has the possibility of becoming the standard work. The organization and research is exceptional and the author is effective in guiding the reader through the detail and amazing complexity of the story."