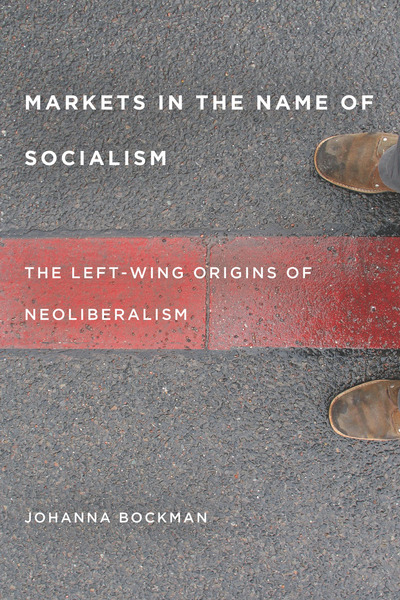 Winner of the 2013 Morris Rosenberg Award, sponsored by the District of Columbia Sociological Society.

The worldwide spread of neoliberalism has transformed economies, polities, and societies everywhere. In conventional accounts, American and Western European economists, such as Milton Friedman and Friedrich von Hayek, sold neoliberalism by popularizing their free-market ideas and radical criticisms of the state. Rather than focusing on the agency of a few prominent, conservative economists, Markets in the Name of Socialism reveals a dialogue among many economists on both sides of the Iron Curtain about democracy, socialism, and markets. These discussions led to the transformations of 1989 and, unintentionally, the rise of neoliberalism.

This book takes a truly transnational look at economists' professional outlook over 100 years across the capitalist West and the socialist East. Clearly translating complicated economic ideas and neoliberal theories, it presents a significant reinterpretation of Cold War history, the fall of communism, and the rise of today's dominant economic ideology.

Johanna Bockman is Associate Professor of Sociology at George Mason University. Her current research explores socialist entrepreneurship, the debt crisis of the 1980s, Yugoslav socialism in Latin America, and gentrification in Washington, D.C.

"Johanna Bockman's book, Markets in the Name of Socialism, seeks to chip away at [the] conventional wisdoms [about neoliberalism, the postsocialist transitions, and the economics profession, which calcified after the fall of the Berlin Wall in 1989]. To do so, she takes her readers on a historically and geographically ambitious worldwide tour of the history of economic thought . . . This elegantly written book reveals a compelling vision in which markets are not, as in the orthodox Marxist view, a Trojan horse for the social hierarchies of capitalism, but a variety of human interaction compatible with many different social systems."

"Johanna Bockman's Markets in the Name of Socialism offers a refreshing take on a fairly well-trodden question: the relationship between economics and neoliberalism in the late twentieth century . . . One of its central strengths is its historically and internationally grounded delineation of the boundary between neoclassicism and neoliberalism . . . Bockman offers a useful corrective to unipolar notions of economic knowledge as developing mainly in the West while Eastern European and Soviet economics, subordinated to Marxist ideology, stagnated . . . Bockman's work is an important step toward thinking outside of neoliberalism's self-presentation by undermining the problematic dichotomies upon which its has ben built —socialism versus capitalism, states versus markets . . . Markets in the Name of Socialism remains an important work that is necessary reading for anyone interested in neoliberalism, economics and the intersection between the two."

"Johanna Bockman's book, Markets in the Name of Socialism: The Left-Wing Origins of Neoliberalism, describes the origins of neoliberalism from a unique perspective that has hardly been explored so far, namely, the contribution of Eastern European economists to the articulation and implementation of neoclassical economic theories . . . The book provides an important sociological perspective on the intellectual developments in Eastern Europe during the Communist era . . . [T]he book is a major contribution to our understanding of the translation of neoclassical economics both to socialism and to neoliberalism, and as such is a particularly important addition to the field."

"Markets in the Name of Socialism shows that there are important lacunae in the study of neoliberalism as a world-scale ideology. . . A richly detailed and well-argued book that should interest PEWS scholars as it opens up new areas of research in neoliberalism as a 'structure of knowledge' within the world-system. In all, Bockman's book offers both an important insight into the history and workings of neoliberalism and a spur to further research."

"Sociologist Johanna Bockman's much-awaited book is undoubtedly an instant classic. Her argument about the left-wing origins of neoliberalism goes against the grain of most theories about neoliberal globalization and postsocialist transformations in Europe. As such, it is a must-read for scholars studying these processes in whatever region of the world. . . With its clear prose, this is relational and transnational history at its best, and this work will undoubtedly shape scholarship for decades to come."

"This book makes a brilliant argument that is of great interest to anybody who wonders about the political impact of economic theory—in the nature of different forms of socialism, in the interpretation of the East European transformation since 1989, and in the future fundamentals of policy."

"This is a daring and well-researched book of breathtaking scope. The author has delved into no less than 100 years of transnational economic discussions that span several continents and politico-economic systems in at least 4-5 languages, drawing on published sources, primary archival materials, and on numerous interviews conducted over a 14 year period. The book presents a bold, counter-intuitive, and original thesis that is destined to attract a lot of attention. Neo-liberalism, it argues, is not simply the enemy, inverse, and grave-digger of socialism; in fact, it is a parasite that originated in the debate with, about, and within socialism."

—Gil Eyal, Columbia University, and author of The Origins of Post-Communist Elites: From the Prague Spring to the Breakup of Czechoslovakia

"In this tour de force, Johanna Bockman studies the history of economics to extricate neoclassical theory and market institutions from their identification with capitalism, and in so doing opens up the future to the possibility of all sorts of market socialisms. A must-read." 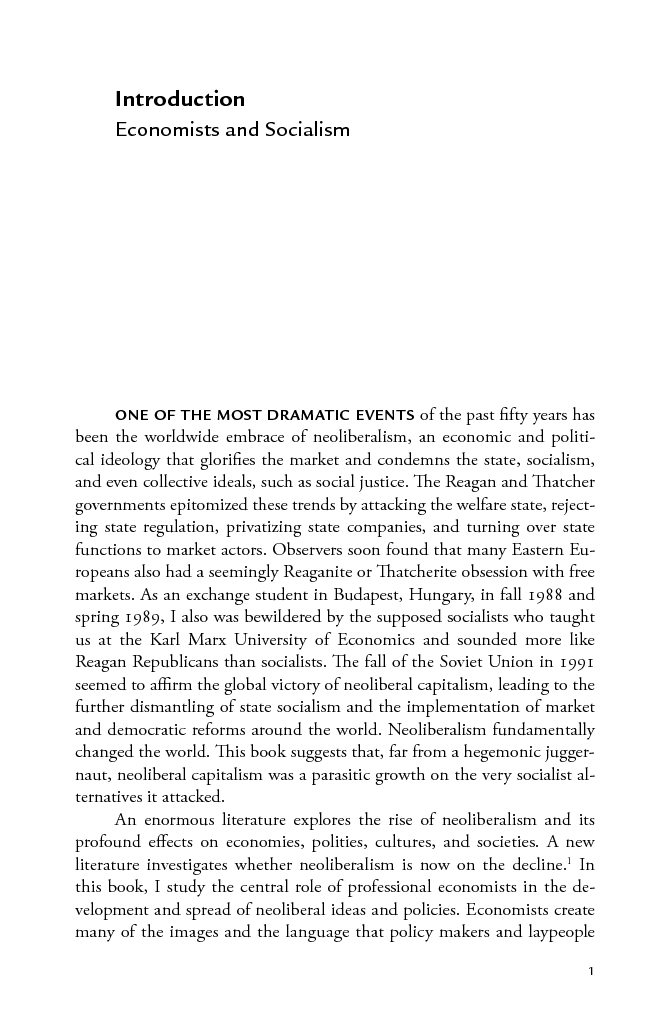 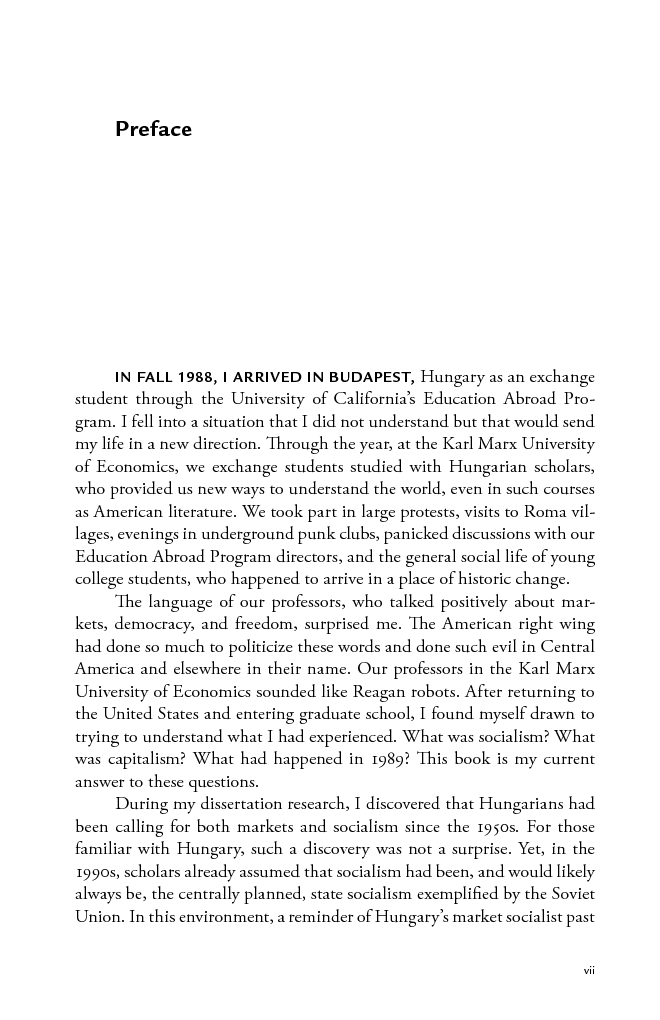 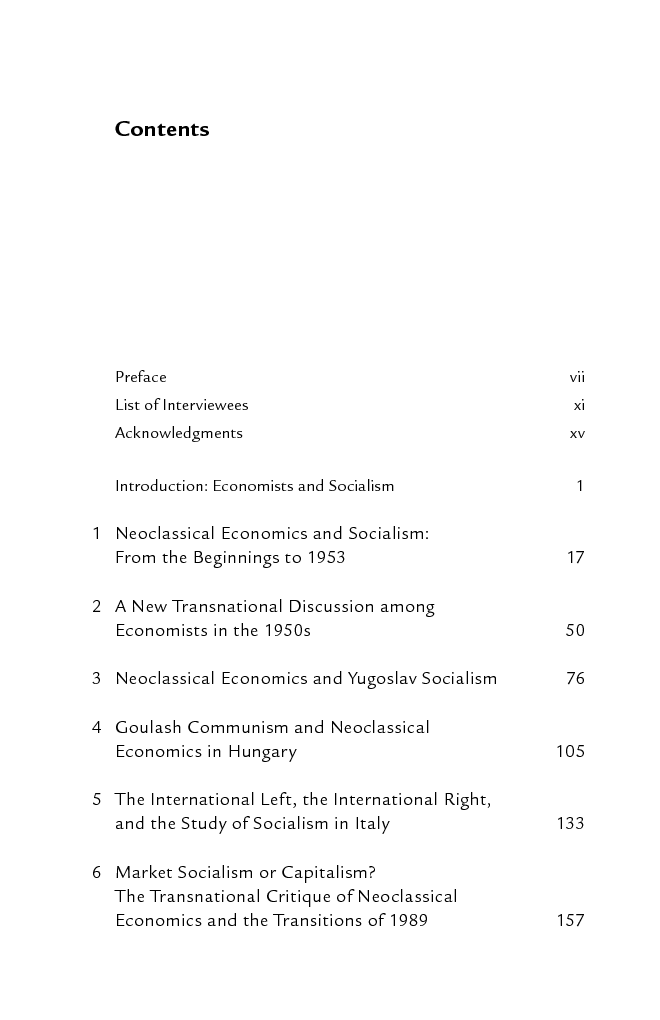