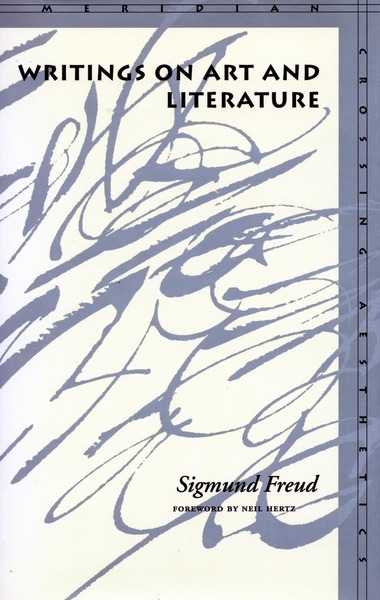 Despite Freud's enormous influence on twentieth-century interpretations of the humanities, there has never before been in English a complete collection of his writings on art and literature. These fourteen essays cover the entire range of his work on these subjects, in chronological order beginning with his first published analysis of a work of literature, the 1907 "Delusion and Dreams in Jensen's Gradiva" and concluding with the 1940 posthumous publication of "Medusa's Head." Many of the essays included in this collection have been crucial in contemporary literary and art criticism and theory.

Among the subjects Freud engages are Shakespeare's Hamlet, The Merchant of Venice, King Lear, and Macbeth, Goethe's Dichtung und Wahrheit, Michelangelo's Moses, E. T. A. Hoffman's "The Sand Man," Dostoevsky's The Brothers Karamazov, fairy tales, the effect of and the meaning of beauty, mythology, and the games of aestheticization. All texts are drawn from The Standard Edition of the Complete Psychological Works of Sigmund Freud, edited by James Strachey. The volume includes the notes prepared for that edition by the editor.

In addition to the writings on Jensen's Gradiva and Medusa, the essays are: "Psychopathic Characters on the Stage," "The Antithetical Meaning of Primal Words," "The Occurrence in Dreams of Material from Fairy Tales," "The Theme of the Three Caskets," "The Moses of Michelangelo," "Some Character Types Met with in Psycho-analytic Work," "On Transience," "A Mythological Parallel to a Visual Obsession," "A Childhood Recollection from Dichtung und Wahrheit," "The Uncanny," "Dostoevsky and Parricide," and "The Goethe Prize."

“These are classic essays, referred to over and over again in work of all sorts, widely read, and extensively used in courses. But until now they have not been collected in English. The choice of essays is excellent, covering the whole chronological range of Freud’s writings on art and literature.”—J. Hillis Miller,University of California, Irvine.