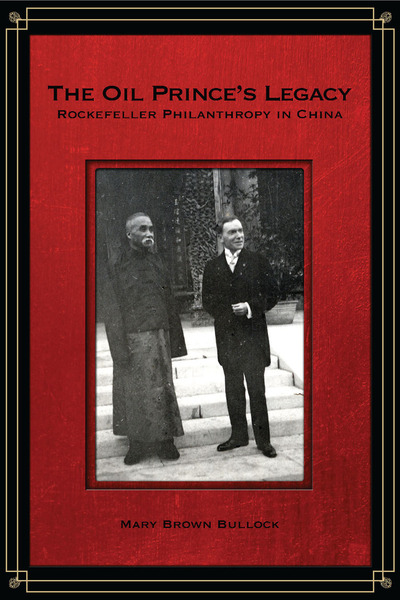 The Oil Prince's Legacy traces Rockefeller philanthropy in China from the nineteenth century to today. Family diaries, letters, interviews in China, and institutional archival records are used to tell a compelling story about successive Rockefeller generations and U.S.–China cultural relations.

Mary Brown Bullock is President Emerita of Agnes Scott College and Distinguished Visiting Professor of China Studies at Emory University. She is a Senior Scholar and former director of the Asia Program at the Woodrow Wilson Center.

"The Oil Prince's Legacy is a well-researched and intriguingly written book that offers a clear retrospective on the first century of Rockefeller China philanthropy. Like a professional detective, Bullock gathers clues and evidence that she found from sifting through the recently opened Rockefeller archives and her interviews with prominent players. She skillfully welds them together into a multilayered, lively narrative about the motivations and actions surrounding Rockefeller philanthropy in China."

"In The Oil Prince's Legacy, Mary Brown Bullock offers a meticulously researched examination of Rockefeller philanthropy in China. Bullock, an historian of China who has been studying the Rockefeller foundation for decades, draws upon family diaries, letters, institutional archives and interviews to create this detailed description of the relationship between the Rockefeller family and China from 1863 to 2010."

"Bullock should be congratulated for having produced this fine piece of work . . . [S]he is uniquely qualified to reassess the Rockefeller legacy in China from the vintage point of China's rise in the early twenty-first century. The effortlessness with which she weaves the various threads together into a seamless story belies the painstaking research, extensive reading, and percipient thinking that produced this work. It is a compelling story told with deep empathy and without compromising her critical stance."

"This is an extraordinary, nuanced, and complex evaluation of the Rockefeller family's motives, actions, and achievements where East Asia is concerned. Showing the impact of China on the Rockefellers as well as the Rockefellers' impact on China . . . makes for some captivating and at times breathtaking reading."

"This is a book that should be of interest to not only the Sinological community, but also to historians and others interested in philanthropy, civic society, cultural diplomacy, and the role and function of epistemic communities."

"Mary Bullock, a leader in the development of cultural relations between China and the United States since the 1970s, has given us an impressively researched and balanced account of the Rockefeller family's involvement with China, including some of its less attractive features. She does a superb job of providing the context of American efforts to change China. Her chapter on the post-Mao era is especially valuable. The book is a major contribution to the history of Chinese-American relations."

"Mary Bullock has written a remarkable, and very readable, account of 150 years of Rockefeller philanthropy in China. The Oil Prince's Legacy is clear in conception, rich in detail, meticulous in scholarship. While properly addressing economic interests and political issues, Bullock offers a convincing case for 'cultural internationalism' as the enduring Rockefeller motivation in China. Bullock's multifaceted background—college president, China specialist, trustee of science and medical institutions—made her the perfect candidate to write this first-rate book."

"Mary Brown Bullock has been thinking about Rockefeller philanthropy in China for more than 30 years. The Oil Prince's Legacy is a mature reflection on the long-term development of America's most important philanthropic family in the context of Christian internationalism. The book is informed by Bullock's subtle understanding of Big Philanthropy, her family's missionary background, and her personal lifelong love affair with China. No one else could have written this magnificent book, which is as thoughtful as it is acute."