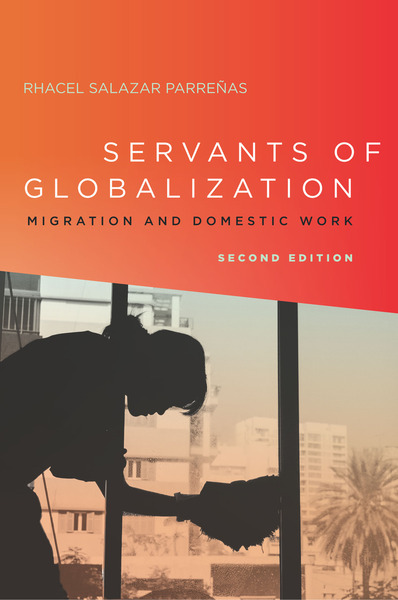 Servants of Globalization offers a groundbreaking study of migrant Filipino domestic workers who leave their own families behind to do the caretaking work of the global economy. Since its initial publication, the book has informed countless students and scholars and set the research agenda on labor migration and transnational families.

With this second edition, Rhacel Salazar Parreñas returns to Rome and Los Angeles to consider how the migrant communities have changed. Children have now joined their parents. Male domestic workers are present in significantly greater numbers. And, perhaps most troubling, the population has aged, presenting new challenges for the increasingly elderly domestic workers. New chapters discuss these three increasingly important constituencies. The entire book has been revised and updated, and a new introduction offers a global, comparative overview of the citizenship status of migrant domestic workers. Servants of Globalization remains the defining work on the international division of reproductive labor.

Rhacel Salazar Parreñas is Professor of Sociology and Gender Studies at the University of Southern California. She is the author of Illicit Flirtations: Labor, Migration, and Sex Trafficking in Tokyo (Stanford, 2011) and Children of Global Migration: Transnational Families and Gendered Woes (Stanford, 2005).

"With rich analysis, absorbing material, and updated research, this new edition of Servants of Globalization offers readers new insight on the experiences of children reunifying with their mothers abroad, men working in a female segregated occupation, and the plight of aging care workers. Rhacel Parrenas's contributions continue to resonate with scholars and activists and inform our 'care crisis' and immigration debates."

—Mary Romero, Arizona State University, and author of The Maid's Daughter: Living Inside and Outside the American Dream

"Rhacel Parreñas extracts powerful theorizations from her ground-breaking research, and with this new edition, she adds significant new conceptual elements. A must read."

"A stunning merger of ethnography with political economy, this new edition of Servants of Globalization is no mere update. Through additional fieldwork and chapters on men and aging workers, Rhacel Parreñas remains the leading voice on migrant domestic labor, the international division of reproductive labor, and the growth of unfreedom amid capitalist globalization."

"Servants of Globalization is a foundational text that has shaped our understanding of the role of domestic work in the globalized world economy. Deeply grounded in the real experiences of some of the most invisible workers, it provides critical, unique perspectives on the changing nature of work and gender in our economy. In this new edition, Rhacel Parreñas strengthens and updates her analysis of the international division of caregiving work, and completes the story with an important new chapter on the question of retirement and the caring of domestic workers themselves as they age."