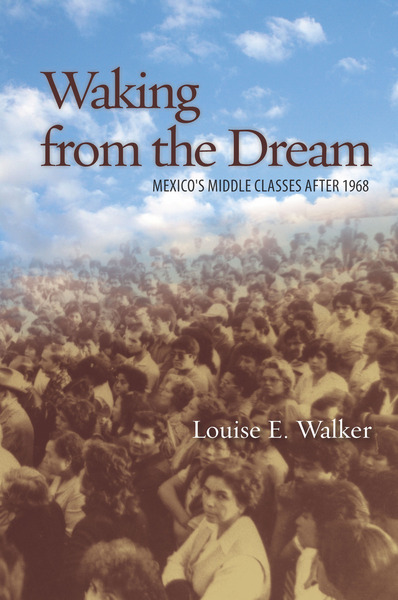 Winner of the 2014 Best Book Award in the Social Sciences, sponsored by the LASA Mexico Section.

When the postwar boom began to dissipate in the late 1960s, Mexico's middle classes awoke to a new, economically terrifying world. And following massacres of students at peaceful protests in 1968 and 1971, one-party control of Mexican politics dissipated as well. The ruling Institutional Revolutionary Party struggled to recover its legitimacy, but instead saw its support begin to erode. In the following decades, Mexico's middle classes ended up shaping the history of economic and political crisis, facilitating the emergence of neo-liberalism and the transition to democracy.

Waking from the Dream tells the story of this profound change from state-led development to neo-liberalism, and from a one-party state to electoral democracy. It describes the fraught history of these tectonic shifts, as politicians and citizens experimented with different strategies to end a series of crises. In the first study to dig deeply into the drama of the middle classes in this period, Walker shows how the most consequential struggles over Mexico's economy and political system occurred between the middle classes and the ruling party.

"This [is a] valuable contribution to ethnographic understanding of middle classes in latter 20th century Mexico . . . Walker argues convincingly that scholarly bias to exclusively study leftist politics creates not only omissions, but distortions. This work offers compelling support for her argument that the Mexican middle classes need to be viewed as heterogeneous, and as full political, economic and social agents who are capable of creating important effects in the nation. Walker's comprehensive coverage enables readers without knowledge of Mexico to get a fuller sense of the political, economic, and social landscape . . . This study analyzes recent Mexican history in depth and breadth, and with vigor and creativity."

—Maureen O'Dougherty, The Journal of Latin American and Caribbean Anthropology

"Louise Walker presents an evocative and highly informative study of the middle classes during several decades of economic and political crisis and upheaval in Mexico . . . [Waking from the Dream] invites critical conversations about the middle class in Latin America, histories of neoliberalism, and class formation. Now that we are rethinking the second half of the twentieth century in Latin America, undergraduate and graduate students alike would be wise to read carefully this book."

"[Walker] has spent a decade accumulating an extraordinarily broad range of resources, including excellent archival sources, documented in some fifty plus pages of notes, which incorporate additional insights worth perusing. She has discovered useful interpretations about government agents, as well as their revealing observations over time. Many of her examples include direct quotes from middle class Mexicans who are presented in a variety of contexts during this period, adding color and veracity to her arguments . . . [A]ny scholar of Latin America interested in the role of the middle classes will benefit significantly from both her methodology and her findings in this objective analysis of a neglected but influential topic in twentieth-century history."

"Walker's work should point the way for a great deal of research in the years to come."

"In a creatively researched, pathbreaking study, she contends that the middle classes were both the barometer to measure the success and then decline of the postrevolutionary agenda of the Institutional Revolutionary Party (PRI), and the protagonists of late-20th-century Mexican history."

"A very lively and most interesting read, on a topic which has received a disgraceful lack of attention—the author taps a rich new vein."

"This is an important work. Walker makes careful use of her sources to explain carefully how and why activism increased in the middle class during the late 20th century." 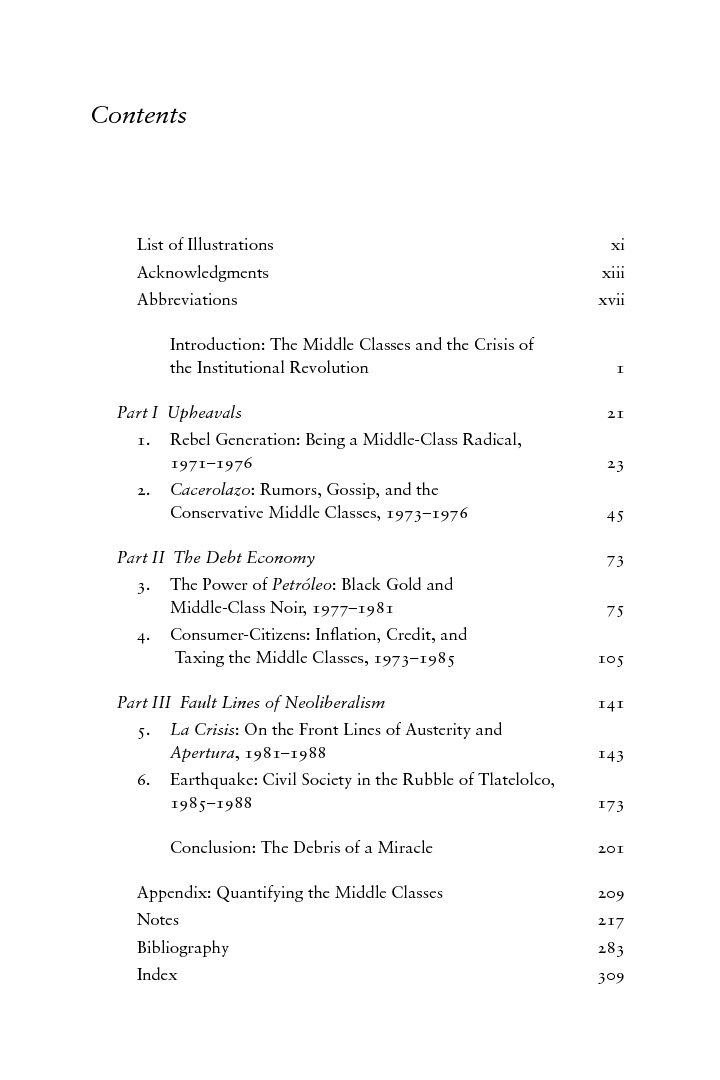 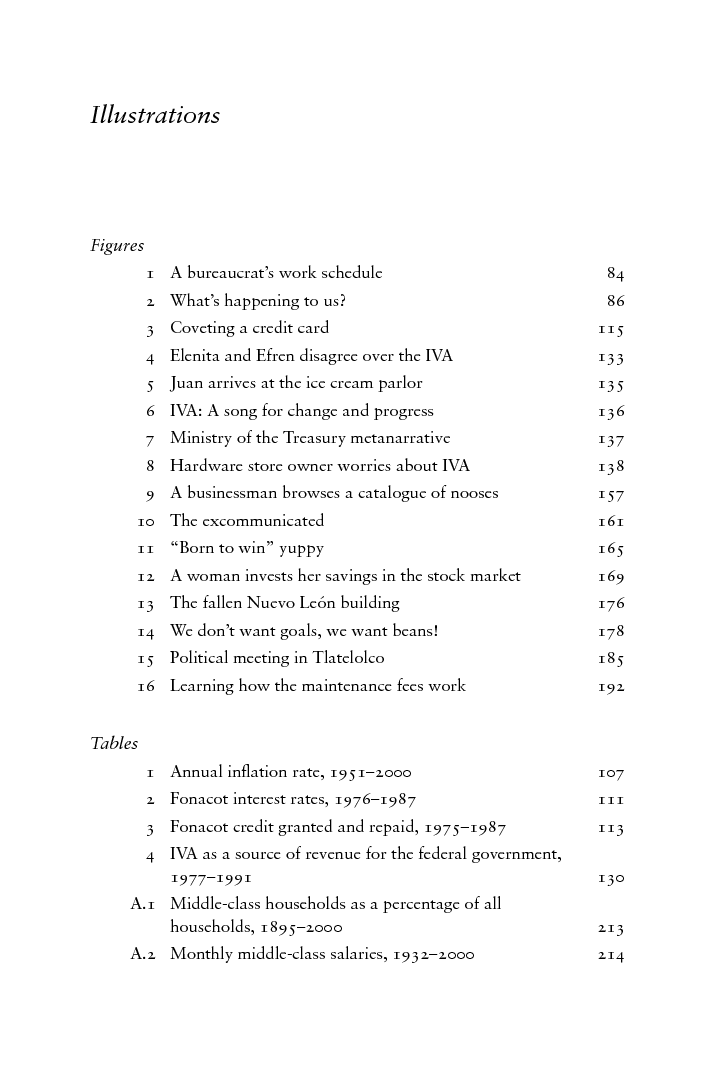 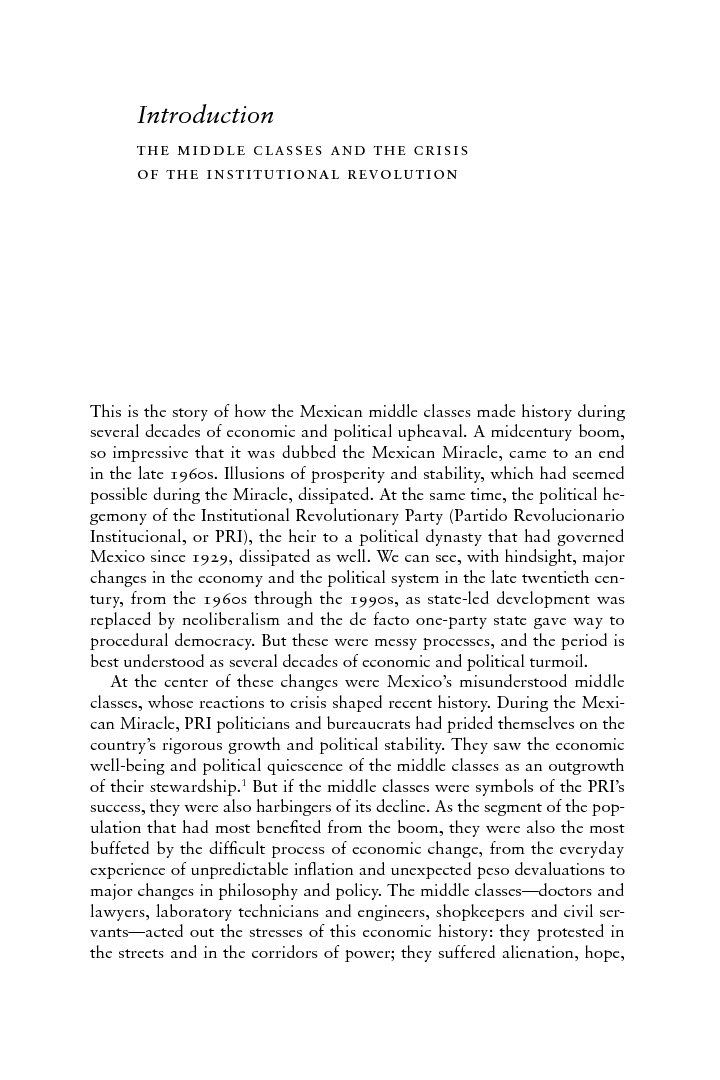