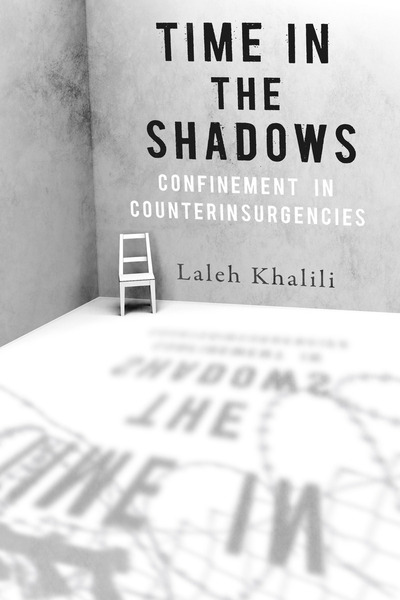 Time in the Shadows
Confinement in Counterinsurgencies
Laleh Khalili

Detention and confinement—of both combatants and large groups of civilians—have become fixtures of asymmetric wars over the course of the last century. Counterinsurgency theoreticians and practitioners explain this dizzying rise of detention camps, internment centers, and enclavisation by arguing that such actions "protect" populations. In this book, Laleh Khalili counters these arguments, telling the story of how this proliferation of concentration camps, strategic hamlets, "security walls," and offshore prisons has come to be.

Time in the Shadows investigates the two major liberal counterinsurgencies of our day: Israeli occupation of Palestine and the U.S. War on Terror. In rich detail, the book investigates Abu Ghraib, Guantánamo Bay, CIA black sites, the Khiam Prison, and Gaza, among others, and links them to a history of colonial counterinsurgencies from the Boer War and the U.S. Indian wars, to Vietnam, the British small wars in Malaya, Kenya, Aden and Cyprus, and the French pacification of Indochina and Algeria.

Khalili deftly demonstrates that whatever the form of incarceration—visible or invisible, offshore or inland, containing combatants or civilians—liberal states have consistently acted illiberally in their counterinsurgency confinements. As our tactics of war have shifted beyond slaughter to elaborate systems of detention, liberal states have warmed to the pursuit of asymmetric wars. Ultimately, Khalili confirms that as tactics of counterinsurgency have been rendered more "humane," they have also increasingly encouraged policymakers to willingly choose to wage wars.

Laleh Khalili is Reader in Middle East Politics at the School of Oriental and African Studies, University of London. She is the author of Heroes and Martyrs of Palestine: The Politics of National Commemoration (2007) and coeditor of Policing and Prisons in the Middle East: Formations of Coercion (2010).

"Time in the Shadows provides a deep chronological history of the global borrowing and movement of military strategies and tactics between colonial outposts and imperial metropoles . . . While Time in the Shadows is the most concerned with US counterinsurgency tactics, it masterfully engages a global and comparative archive in order to position the United States in the context of a longer history of liberal states engaged in counterinsurgencies."

"Laleh Kalili's Time in the Shadows: Confinement in Counterinsurgencies is a lucid analysis of a dark history . . . Taken together, the case studies that comprise Time in the Shadows add up to a tremendously useful study that helps us to understand the violence at the heart of liberal counterinsurgency . . . Khalili provides exactly the analysis we need in order to draw transnational linkages in security and warfare tactics, logics, and expertise. As a result of her deft analysis, we can understand our proximity to seemingly distant global battlefields, as well as the violence that can be perpetuated in the name of liberal governance. Time in the Shadows is not only interesting, but is also very much needed by scholars interested in charting the global and multidirectional capillaries of liberal imperial power."

"The strength of this ambitious project lies in the depth and breadth of its historical engagement with the continuities and civilizations of the 'micro-practices' of counterinsurgency . . . When [the] oppositional spheres of unlimited mobility and confinement are considered together it opens up a rich space for temporal and spatial discussions around visibility/invisibility and other material and legal dimensions of liberal forms of violence . . . [T]his book continues to serve as an excellent resource and sounding board for understanding the ongoing Israeli counterinsurgency warfare in Gaza, and in particular the 'buffer zone' in Gaza . . . Khalili's work certainly helps to bring the compartments of confinement and lines of our contemporary comment into stark relief, making this also a valuable resource to contemplate future politics of liberation."

"This is a timely, highly readable, and important book that examines the method of warfare many believe will be most used in the future. It does so in a meticulously researched, scholarly fashion. . . Highly recommended."

"Laleh Khalili's Time in the Shadows is the ghostly other of The U.S. Army/Marine Corps Counterinsurgency Field Manual. Deft and informative, the book provides a historical excavation of the imperatives of counter-insurgency doctrines—from the ideas that drove the European colonial wars in the dying days of those empires to the U.S. and Israeli states of warfare in our own times. A serious book that should be required reading."

—Vijay Prashad, Trinity College, author of The Darker Nations: A People's History of the Third World

"Time in the Shadows is a stunning blend of politically information analysis and vast empirical detail about U.S., Israeli, British, and French policies of war and occupation. Khalili deftly compares and contrasts a wide variety of confinement strategies—torture, detention without trial, kidnapping, civilian concentrations—and related counterinsurgency practices, drawing on histories from various settings across multiple continents, as well as the records and writings of influential counterinsurgents of the past to show how they inform the perspectives of contemporary counterinsurgency theorists and practitioners."

"Laleh Khalili's magisterial volume is as welcome as it is timely, with useful discoveries and wise interpretations of the distinctive problems posed by the rise of global securitocracy. If you want to understand how things came to be as bad as they are in an era characterized by apparently endless counterinsurgency warfare, this magnificent contribution supplies the answers."

—Paul Gilroy, London School of Economics, author of After Empire 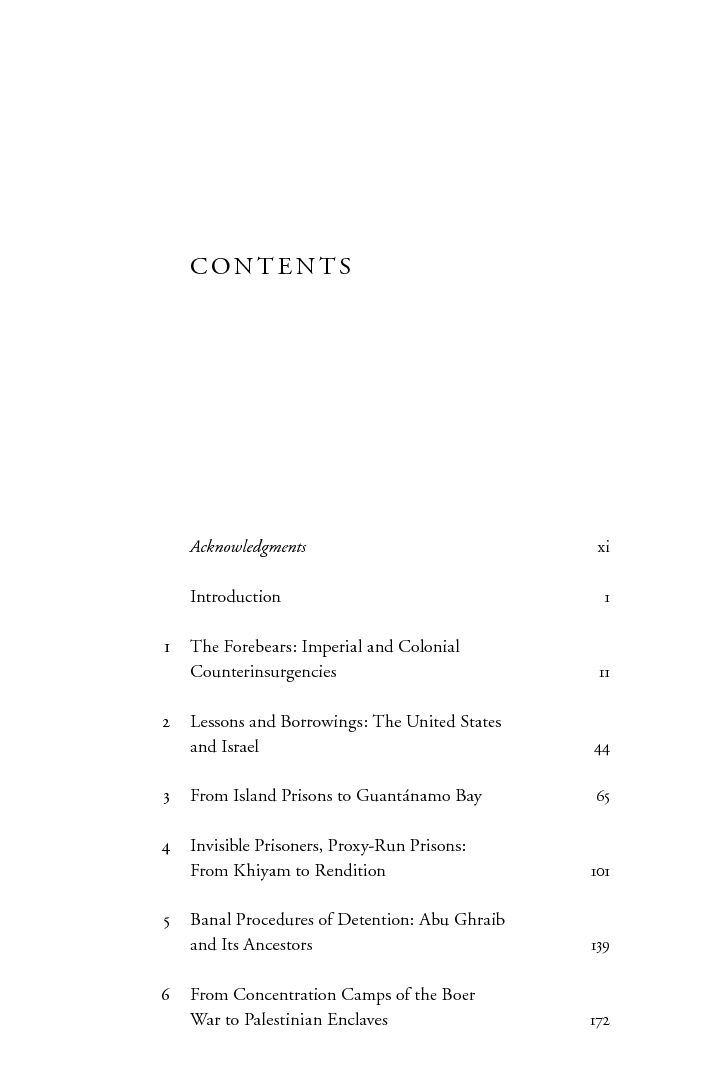 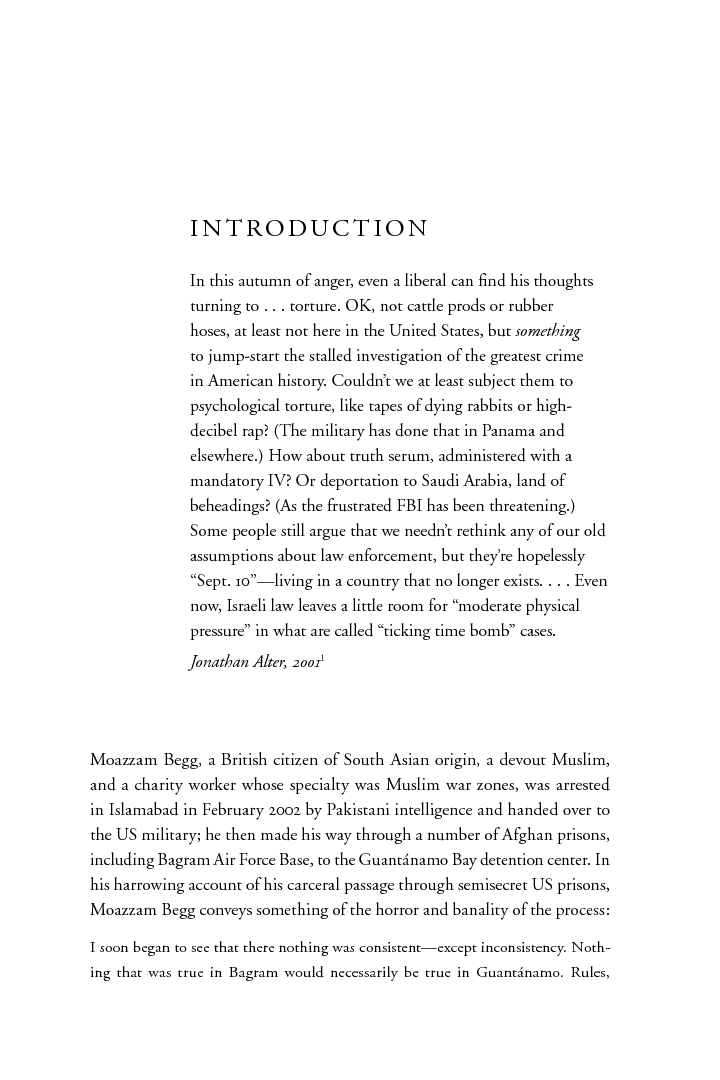