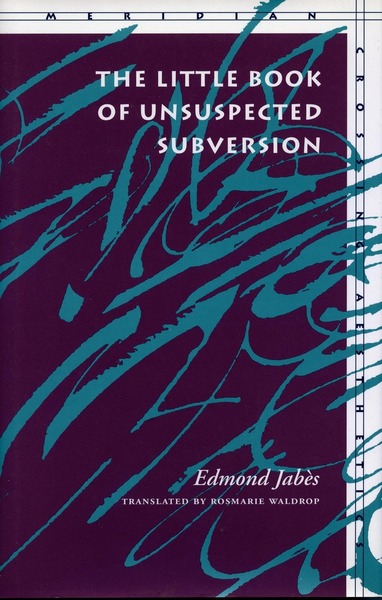 The late Edmond Jabes was a major voice in French poetry in the latter half of this century. An Egyptian Jew, he was haunted by the question of place and the loss of place in relation to writing, and he was one of the most significant thinkers of what one might call poetical alienation. He focused on the space of the book, seeing it as the true space in which exile and the promised land meet in poetry and in question. (This is summarized from the reader's description in A New History of French Literature, ed. Denis Hollier.) Very many of Jabes's books of prose and poetry have been translated into English, including The Book of Dialogue ( Wesleyan, 1987) and The Book of Margins (Chicago, 1993), both translated by Rosmarie Waldrop.

“Jabès explores a realm of subversiveness above suspicion, indeed a dialectic of subversion itself. Poised between the poetic and the aphoristic, Jabès’s new book calls into deep meditative question the easy, received notions of subversiveness which have become a sort of default mode for diligently dull academic scholars, and celebrates the energies of ever-freshened inquiry.”—John Hollander, Yale University