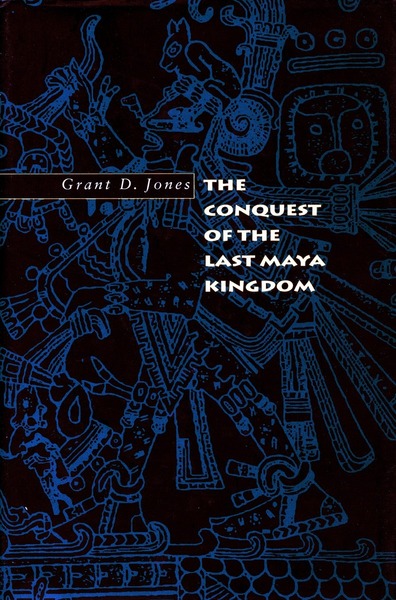 The Conquest of the Last Maya Kingdom
Grant D. Jones

On March 13, 1697, Spanish troops from Yucatán attacked and occupied Nojpeten, the capital of the Maya people known as Itzas, the inhabitants of the last unconquered native New World kingdom. This political and ritual center—located on a small island in a lake in the tropical forests of northern Guatemala—was densely covered with temples, royal palaces, and thatched houses, and its capture represented a decisive moment in the final chapter of the Spanish conquest of the Mayas.

The capture of Nojpeten climaxed more than two years of preparation by the Spaniards, after efforts by the military forces and Franciscan missionaries to negotiate a peaceful surrender with the Itzas had been rejected by the Itza ruling council and its ruler Ajaw Kan Ek’. The conquest, far from being final, initiated years of continued struggle between Yucatecan and Guatemalan Spaniards and native Maya groups for control over the surrounding forests. Despite protracted resistance from the native inhabitants, thousands of them were forced to move into mission towns, though in 1704 the Mayas staged an abortive and bloody rebellion that threatened to recapture Nojpeten from the Spaniards.

The first complete account of the conquest of the Itzas to appear since 1701, this book details the layers of political intrigue and action that characterized every aspect of the conquest and its aftermath. The author critically reexamines the extensive documentation left by the Spaniards, presenting much new information on Maya political and social organization and Spanish military and diplomatic strategy.

This is not only one of the most detailed studies of any Spanish conquest in the Americas but also one of the most comprehensive reconstructions of an independent Maya kingdom in the history of Maya studies. In presenting the story of the Itzas, the author also reveals much about neighboring lowland Maya groups with whom the Itzas interacted, often violently.

Grant D. Jones is Charles A. Dana Professor of Anthropology at Davidson College and the author, most recently, of Maya Resistance to Spanish Rule: Time and History on a Colonial Front.

“This magisterial study will assume the status of an enduring classic in the field of Mesoamerican studies. Superbly crafted, it presents an original reinterpretation of the events and circumstances surrounding the conquest of the Itza Mayas by the forces of imperial Spain. . . . It is a magnificent work.”—W. George Lovell, Queen’s University