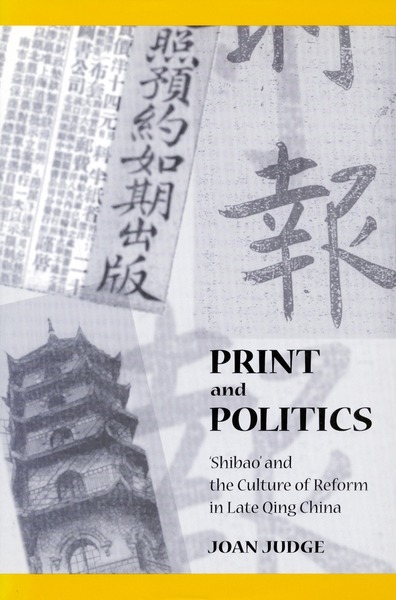 Print and Politics offers a cultural history of a late Qing newspaper, Shibao, the most influential reform daily of its time. Exploring the simultaneous emergence of a new print culture and a new culture of politics in early-twentieth-century China, the book treats Shibao as both institution and text and demonstrates how the journalists who wrote for the paper attempted to stake out a “middle realm” of discourse and practice.

Chronicling the role these journalists played in educational and constitutional organizations, as well as their involvement in major issues of the day, it analyzes their essays as political documents and as cultural artifacts. Particular attention is paid to the language the journalists used, the cultural constructs they employed to structure their arguments, and the multiple sources of authority they appealed to in advancing their claims for reform.

Joan Judge is Assistant Professor of Chinese History at the University of Utah.

"Print and Politics is a first-rate study of a very influential Chinese newspaper. It provides us with a richly textured picture of the evolution of radical approaches to reform in the years leading up to the Revolution of 1911, as well as a fascinating overview of the attempts of one key group to develop a new political vocabulary rooted in indigenous and imported concepts that would empower the exercise of public opinion."